A diver releases some of the more than 140 baby White’s seahorses into their new “Seahorse hotel” home in Sydney Harbour. Picture: Sea Life Sydney Aquarium

A batch of baby seahorses has checked in to two special “hotels” in Sydney Harbour as part of a project to boost wild populations of the threatened species.

The “seahorse hotels”, also known as “SeaBnBs”, are habitats that have been created in the harbour to provide a home for the White’s seahorse, Australia’s only threatened seahorse species. A White’s seahorse makes itself at home in its new home in Sydney Harbour. Picture: Sea Life Sydney Aquarium

Wild populations of White’s seahorses, also known as Sydney seahorses, have been in decline because of habitat loss and degradation* of their harbour home.

The project, a joint effort led by Sea Life Sydney Aquarium and the NSW Department of Primary Industries (DPI) Fisheries, started in 2019 with the placement of 27 “seahorse hotels” in Sydney Harbour.

The first aquarium-bred seahorse babies were released into the “hotels” the following year, followed by the second release of more than 140 seahorse babies on September 9 this year. 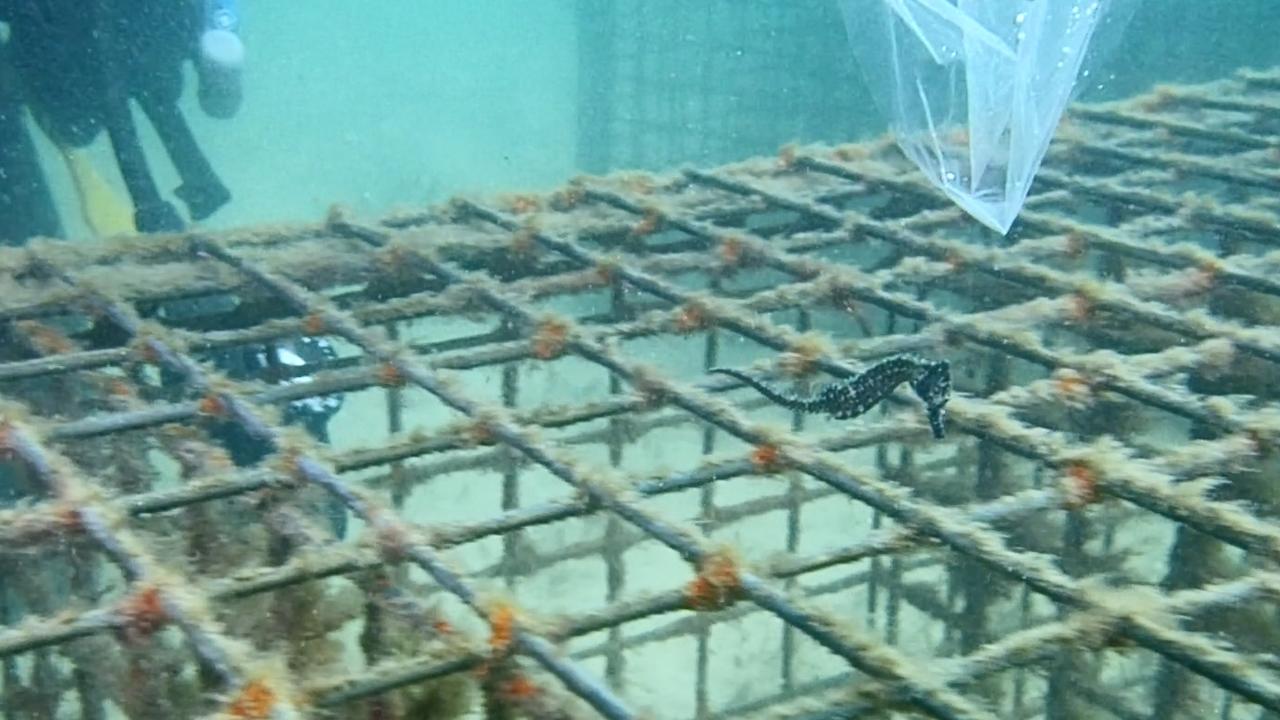 A White’s seahorse swims into its “seahorse” hotel” habitat after being released by a diver in Sydney Harbour. Picture: Sea Life Sydney Aquarium

“We hope they’ll go on to breed all around Sydney Harbour and the east coast of Australia to help White’s seahorses flourish*,” said Sea Life Sydney Aquarium curator Laura Simmons.

The “seahorse hotels” resembled* crates when they were first lowered into the water. But they transformed into natural habitats as corals, algae and marine animals like sea squirts and sponges moved in, providing protection from predators and a ready supply of food.

The biodegradable* structures slowly collapse over time under the weight of the marine growth, leaving a perfect natural home for the seahorses. A diver prepares to release a batch of baby seahorses into the wild in Sydney Harbour. Picture: Sea Life Sydney Aquarium

“Just last year the White’s seahorse was listed as an endangered* species in NSW and this collaborative* project is helping provide artificial* homes for seahorses to live on in Sydney Harbour,” said DPI Fisheries senior marine scientist Dr David Harasti.

“The captive breeding program and seahorse hotels initiative* is providing hope for this iconic* … marine species and will hopefully contribute to their numbers increasing in the wild.”

Underwater Photographer of the Year

VCOP ACTIVITY
Imaginative Dialogue
Imagine you were there during the event being discussed in the article.

Create a conversation between two characters from the article. (You may need, or want, to include yourself as one of the characters). Don’t forget to try to use facts and details from the article to help make your dialogue as realistic as possible.