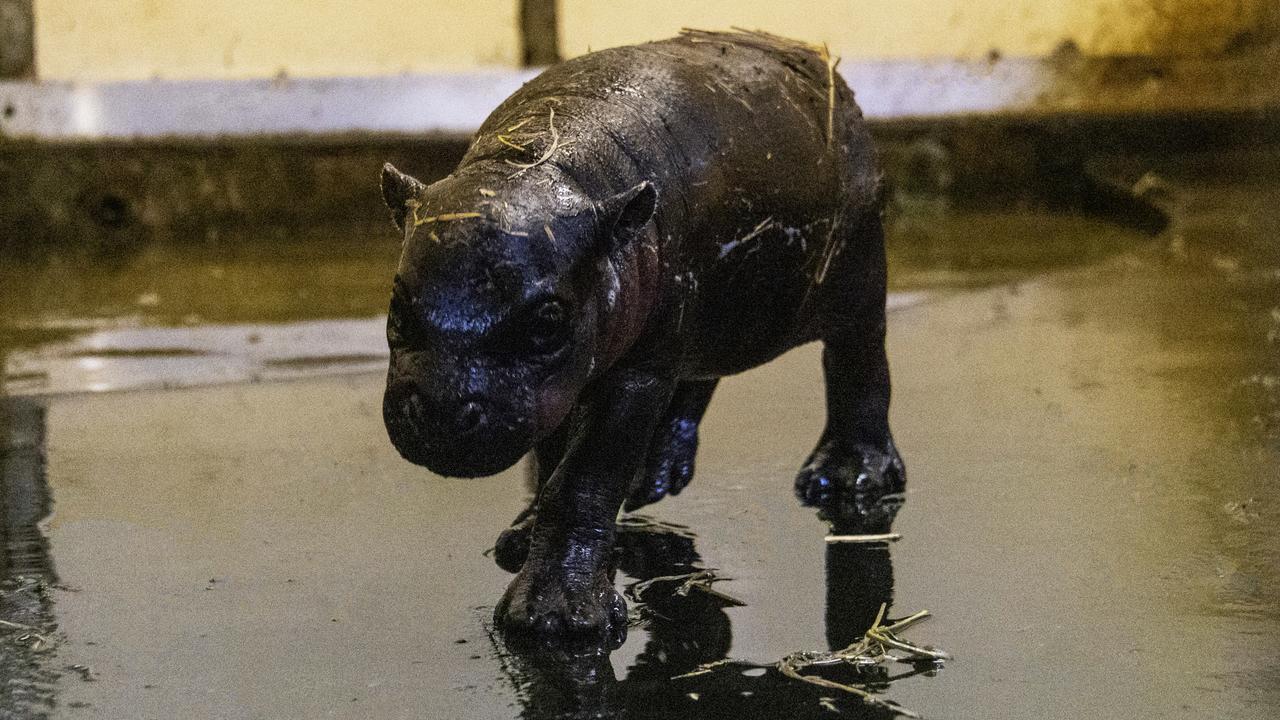 Sydney’s Taronga Zoo has welcomed a healthy pygmy hippo calf for the first time in four years. With an estimated 2000 to 3000 left in the wild, the successful birth of the calf is cause for celebration. Picture: Taronga Conservation Society Australia

An endangered* pygmy* hippo calf has been born at Sydney’s Taronga Zoo.

Arriving on November 22, the little one is enjoying life with experienced parents Kambiri and Fergus. This is the second successful mating* for the adult pair – the last pygmy hippo to be born at Taronga was their first calf four years ago.

Currently winning hearts with an adorable waddle while she perfects the art of walking, the female calf spends most of her time in a private nursery den, under the watchful eye of her mum. The female pygmy hippo calf is the second to be born at Sydney’s Taronga Zoo to adults Kambiri and Fergus. Picture: Taronga Conservation Society Australia

Just like human newborns, much of the day consists of the calf having short bursts of energy followed by suckling* from mum and then napping. But because pygmy hippos are a semiaquatic* species, the calf is also learning how to swim.

Even though Kambiri gave birth in a shallow pool, pygmy hippo calves aren’t born knowing how to swim or hold their breath and need to be taught by their mothers.

“Over the past couple of days, we’ve been giving the pair supervised access to a shallow pool in their den,” Taronga unit supervisor of ungulates* Gabe Virgona said.

“They were initially hesitant, but just yesterday the calf took her first step into the water. Although it may not seem like a big step to some, it is a massive milestone* for mum and calf.” 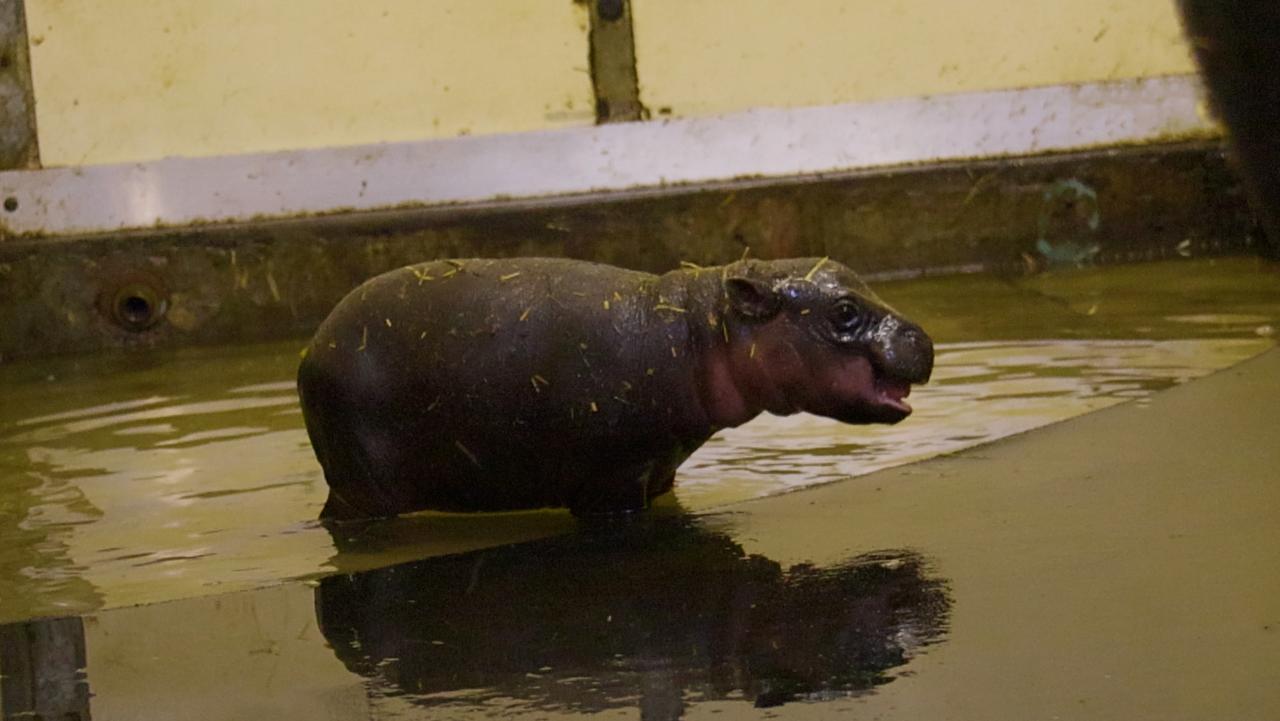 The pygmy hippo calf has to learn how to swim and looks to be enjoying her first lessons in the modified pool. Picture: Taronga Conservation Society Australia

Over the past couple of months, the team has been “baby proofing” areas of the pygmy hippo den and exhibit zone. In the maternity den, the team has installed baby barriers along the walls that shelter and protect the little calf. The floor of the pond has also been raised in the main exhibit, making it easier for the calf to access while she has her swimming lessons.

“Whilst the calf is still finding her slightly webbed feet and mastering the art of swimming, she won’t be on exhibit just yet, but it will only be a matter of time until she’s ready to make her big splash to the public,” said Mr Virgona.

Pygmy hippos are native to forests and swamps of West Africa and are generally solitary* animals, only coming together for breeding. Along with those slightly webbed feet, pygmy hippos have other physical adaptations for semiaquatic life, including long legs for wandering forests and the ability to close their nostrils and ears. 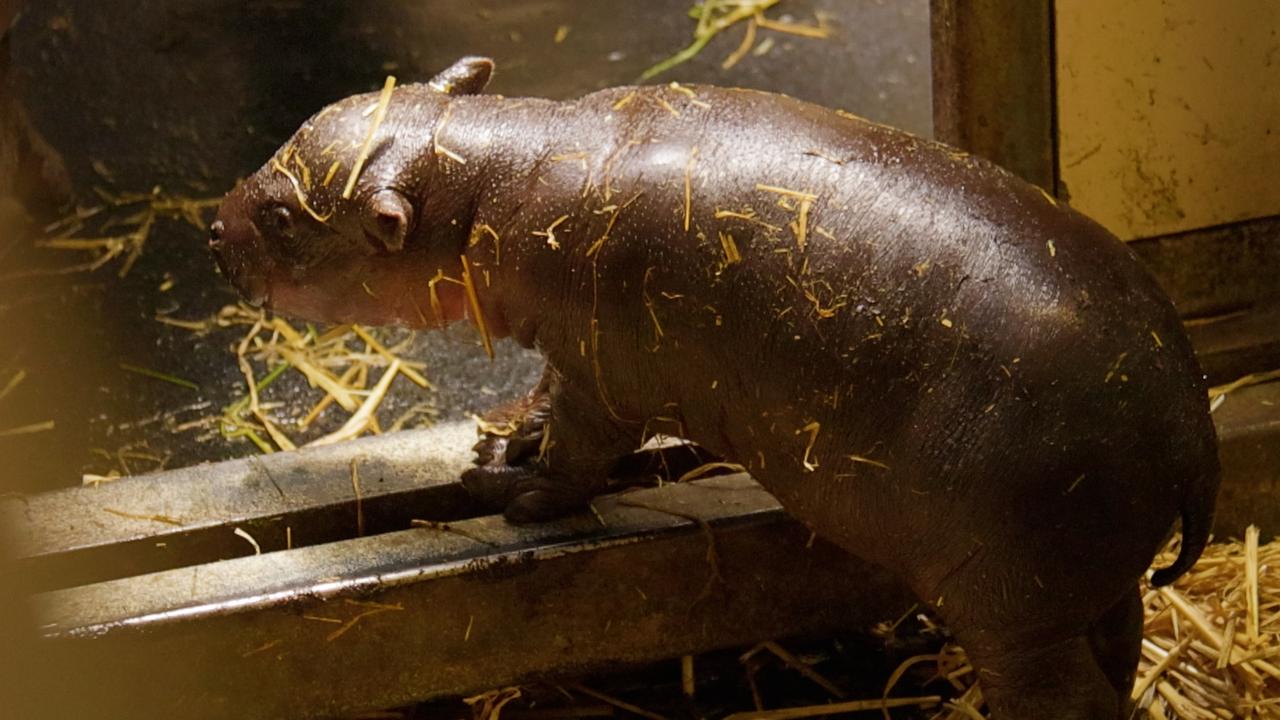 The adorable calf is winning hearts of zookeepers with her waddle, but she won’t be ready to meet the public for a few more weeks. Picture: Taronga Conservation Society Australia

Only an estimated 2000 to 3000 pygmy hippos remain in the wild. An endangered species, their numbers continue to decline.

“These remarkable, yet highly elusive* animals are threatened by a number of reasons, but the leading cause of decline is habitat* loss, as their forest and jungle homes are often being logged and converted into farmland,” said Mr Virgona. “However, wild populations are also heavily impacted by human-animal conflict as well as poaching*.”

The little calf is expected to make her public debut in a few weeks, in time for summer school holidays – when she certainly won’t be the only youngster eager for a splash.

Wild horses to be reined in

CLASSROOM ACTIVITIES
1. Human and animal mums
List some of the similarities you can think of between a female human who has given birth to a baby and a female animal that has given birth like this pygmy hippo.

2. Extension
How do you think this hippo mum teaches its baby to swim and breathe underwater? How does a human baby learn to swim? Any similarities there?

VCOP ACTIVITY
Stretch your sentence
Find a “who” in the story – a person or an animal. Write it down.