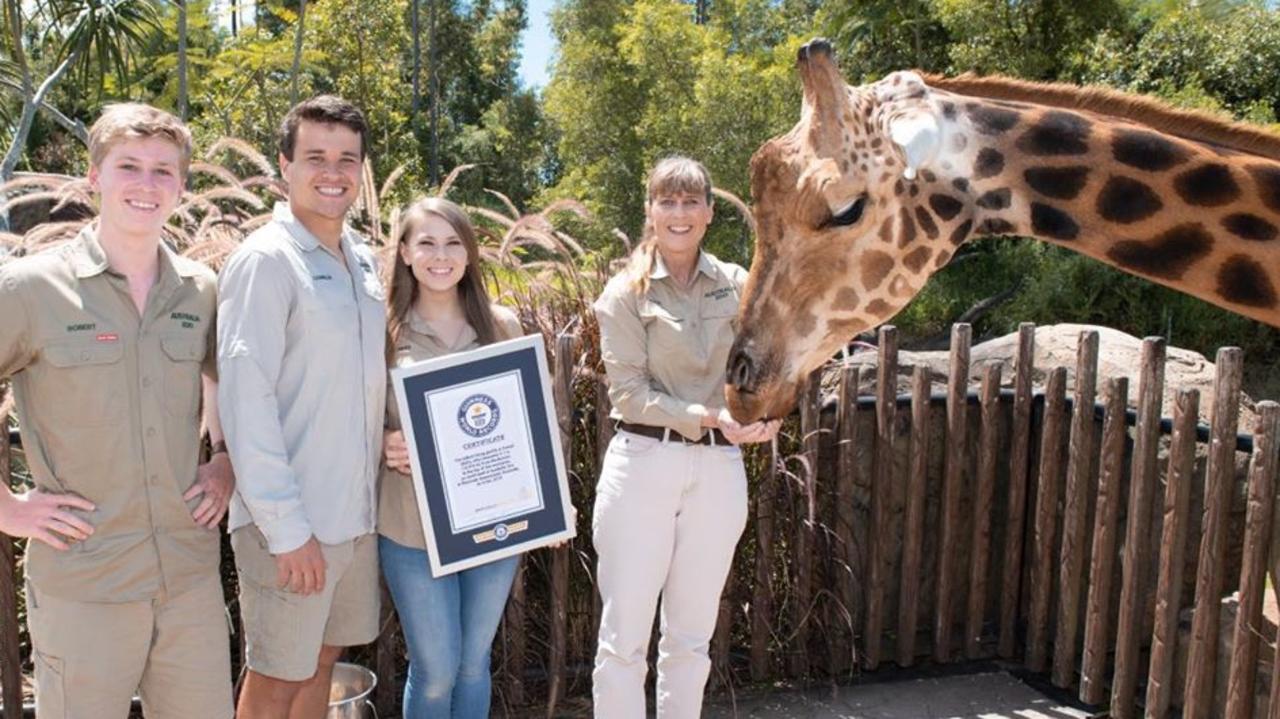 A 12-year-old giraffe called Forest – who lives at Australia Zoo in Queensland – has been confirmed as the world’s tallest giraffe, standing at 5.7m.

Measuring Forest was a tall order* in itself, his keeper, Kat Hansen revealed.

“It took us a number of months to be able to do it,” she told ABC.

Staff had to create a specially marked measuring pole and rig* it close to a hay dispenser in the giraffe house, coaxing* the animal to stand up nice and straight with the promise of food – all while the cameras were rolling. Adult males, called bulls, typically measure between 4.6 and 5.5m, with Forest standing around 20cm above the rest.

Giraffes are fully mature by the age of 3-6 years and usually live 10-15 years in the wild and 20-25 years in captivity.

Born at Auckland Zoo in New Zealand in 2007, Forest moved to his new home at the age of two.

The entire Australia Zoo family – headed by conservationists the Irwins – couldn’t be prouder of Forest’s achievement.

“Our big boy, ‘Forest’ has just made history being announced as the world’s tallest living giraffe! He is one beautiful gentle giant!” Robert Irwin excitedly told fans on Twitter.

“Our sweetheart Forest has officially made it into the Guinness World Records for being the tallest living giraffe! We are proud of our towering guy, he has such a wonderful heart.”

She added: “Giraffes are doing it tough in the wild, and we’re so proud that we can do our part in ensuring this species is around for the generations to come.” Forest is an important part of the giraffe breeding program at Australia Zoo. He has fathered 12 calves over the past decade, with another on the way.

With Forest’s genes, who knows if one of his offspring could go on to claim the title from dad!

In the wild, giraffes (Giraffa camelopardlis) as a species are currently recognised as vulnerable by the International Union for Conservation of Nature (IUCN), with pressure mounting for their status to be upgraded to endangered. You can make the recount as comical as you like. Maybe you got him standing up tall and doing everything right but the person filming had forgotten to press record? Or maybe Forest was not feeling co-operative that day and wouldn’t stand next to the measuring pole.

2. Extension
Design an enclosure in a zoo for Forest and some of his giraffe friends. Try to make the enclosure as close as possible to the giraffe’s natural habitat (you might need to do some research to help you). Think about the type of food, and water availability they normally have.

In your design include the dimensions of the fence, trees (type and height) the shelter areas (including the height of doorways and roof). Also include an area that zookeepers can check the health of the giraffes safely. It will need to be high enough so they can check their eyes and mouth safely.

Draw your design and label it with the details mentioned and any other details you feel are important.

HAVE YOUR SAY: What huge or tiny animal would you like to measure?
No one-word answers. Use full sentences to explain your thinking. No comments will be published until approved by editors.