Fox without socks takes a liking to shoes A cunning thief is stealing shoes from front verandas in Adelaide’s western suburbs.

But this intruder is proving tricky to stop, prowling the area mostly at night and hiding its loot on the sly* in its den.

The shoe stealer is a fox and has become the talk of the Henley Beach South community in South Australia, with several residents reporting having boots and sneakers taken from the front of their homes.

Sheree Hicks has had shoes taken from the veranda at her house, and also had four chickens killed by a fox about four weeks ago.

“My neighbour said, ‘Did you happen to look after a puppy last night? Our shoes are scattered all over the cul-de-sac*’,” Mrs Hicks said.

“We also had shoes scattered from our front porch on to our lawn. I thought, ‘What the heck, what’s going on here?’. Then I thought, ‘My gosh, it’s a fox’.”

Determined not to be outfoxed by the thief, with the help of her children she went in search of a den and found one on the northern side of the River Torrens Linear Park, near the river mouth. “We found it and there was a shoe sitting at the entrance,” Mrs Hicks said. “I have lived in Henley Beach my entire life and I have never heard of this many foxes.” 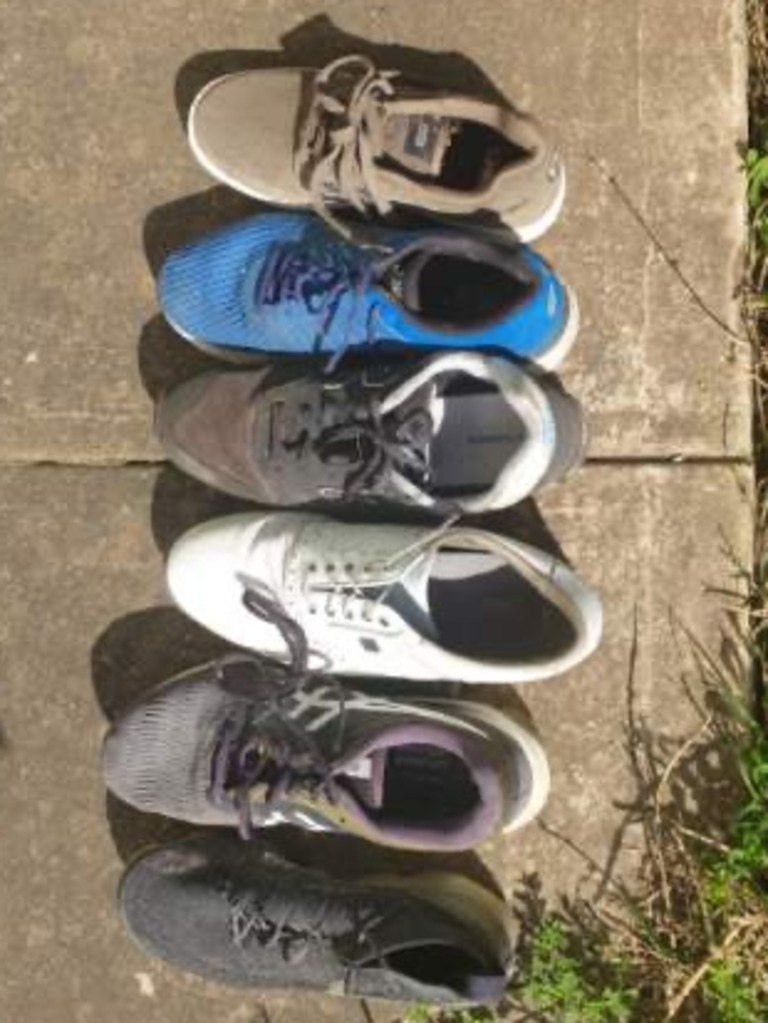 Some of the stolen shoes, after they were found again. Picture: Sheree Hicks

She said the shoe-stealing fox was the talk of the community.

Randolf Evans was walking his dog along the Linear Park when he noticed lots of shoes strewn* around the area.

“You come out in the morning and the last thing you expect is for your shoes to have gone missing,” Mr Evans said.

He posted his find to social media, and said several people had gone to the den to retrieve their shoes.

“Foxes are part of the dog group, and most people who have had a domestic dog in their house know how much of a shoe fetish* they have in general,” Prof Burke da Silva said. “I think they’re like, the dirtier the better.”

She said there was a “very big fox population and problem in the Adelaide area”.

“If there is an increase in sightings, it generally indicates that numbers are growing,” she said. “If they are taking chickens, then they would also be taking native wildlife and that’s a problem.”

She said the state’s eradication* program “definitely needs to be strengthened”. In Australia, foxes are an introduced predator that hunt wildlife.

FOXES IN AUSTRALIA
European red foxes (scientific name: Vulpes vulpes) were first introduced into Australia in 1855 for people to hunt for sport. There were established populations in the wild by 1870.

They are widespread across most of Australia, apart from some islands, western Tasmania and the tropical far north of Western Australia, Northern Territory and Queensland.

Most amazing wildlife photos of the year

CLASSROOM ACTIVITIES
1. What’s in the Story?
Read the story carefully. Write down all of the different features that have been included in this news story that make it interesting and give you information.

Select 3 sentences from the article to add an aside comment to using brackets. Think about not only what you want to add to the sentence, but also what effect you are trying to create

HAVE YOUR SAY: Have you ever seen a fox? What was it doing?
No one-word answers. Use full sentences to explain your thinking. No comments will be published until approved by editors.