The Malay Peninsula population of the critically endangered Sumatran rhinos has been considered extinct since 2015. Picture: Facebook/WWF-Malaysia

The Sumatran rhinoceros, a rainforest loner, is a critically endangered* species. But according to scientists, a recent genome* study has good news about the chances of saving the species from extinction.

The researchers found that the two remaining wild populations of the rhino – on the islands of Borneo and Sumatra – have unexpectedly good genetic* health and surprisingly low levels of inbreeding, which means mating with close relatives.

Experts estimate only 80 Sumatran rhinos remain. The closest living relative to the woolly rhinoceros, a notable* species of the last Ice Age, the Sumatran rhino is known for its two small horns and a thin coat of reddish-brown hair. 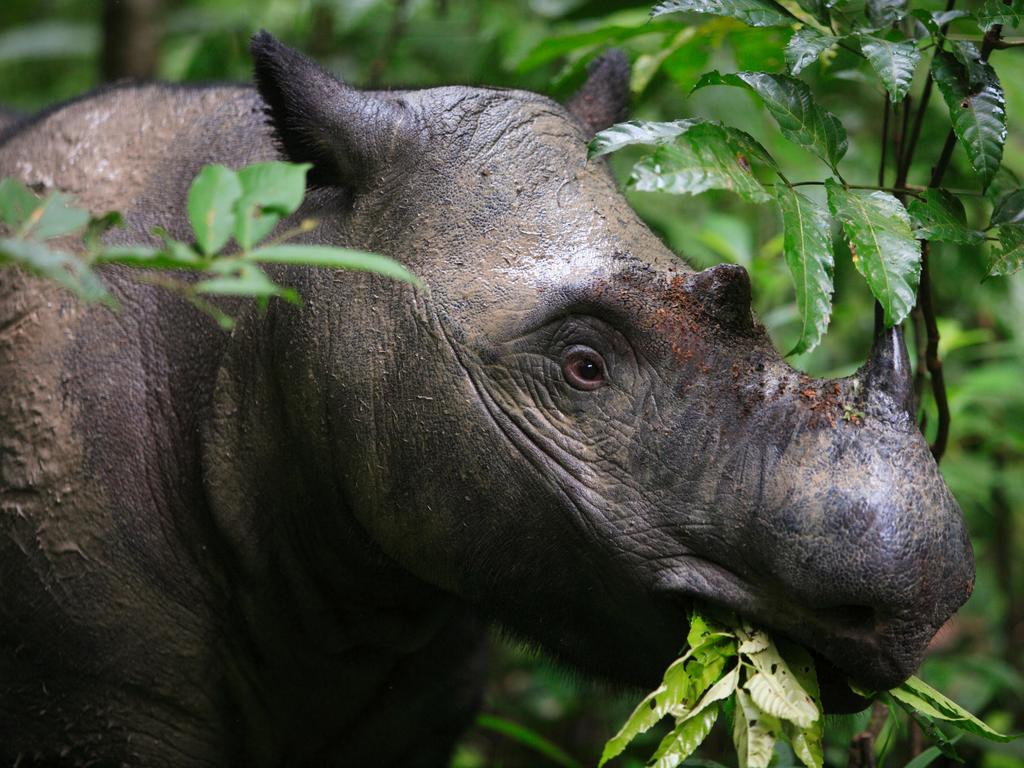 “With such small population sizes, we were expecting much higher inbreeding in (surviving) populations of Sumatran rhinoceros. So these findings were good news to us,” said Nicolas Dussex, a postdoctoral researcher at the Centre for Palaeogenetics* in Sweden, who helped lead the study published in the journal Nature Communications.

“While the fate of the Malaysian population serves as a stark warning to what might happen to the two remaining populations on Sumatra and Borneo, our findings suggest that it may not be too late to find ways to preserve* the genetic diversity of the species,” Dussex said.

The researchers sequenced the genomes of seven rhinos from Borneo, eight from Sumatra and six from the Malay Peninsula population, considered extinct since 2015.

The Sumatran rhinoceros is the smallest of the world’s five rhinoceros species, at around 700 to 800kg. The elusive* rainforest inhabitant, the most vocal rhino species, remains alone except for mating and raising offspring. It once had a wide range in Southeast Asia, from the foothills of the Himalayas down to Borneo and Sumatra.

Poaching* and habitat destruction by humans have devastated its population, with its numbers falling by about 70 per cent in just two decades. “When it comes to long-term survival of a species, genetic diversity is one of the key factors, as this enables adaptation to future environmental changes and diseases,” said Johanna von Seth, Centre for Palaeogenetics doctoral student and study lead author. “So, the fact that a lot of diversity remains is very promising if we can manage to maintain it, of course assuming we can also reduce the impact of non-genetic factors.”

The researchers said steps such as moving rhinos for mating or using artificial means could allow a successful exchange of genes between the Borneo and Sumatra populations. This species has shown low reproductive success in captivity and faces a high risk of inbreeding in the wild because of its small numbers.

Inbreeding creates a higher risk of genetic flaws and reduced genetic diversity. Scientists were worried that reports of tumours and low fertility among these rhinos showed a dangerously inbred population.

“It’s important to remember that the Sumatran rhino is still on the verge of extinction due to non-genetic factors,” said Centre for Palaeogenetics evolutionary genetics professor and study co-author Love Dalén.

“So the hope, though little, that these results offer is that if we manage to solve the problems caused by habitat destruction and poaching, there is at least a chance that the survivors will not be doomed by their poor genetic status,” Dalén said.

Meanwhile, Australia’s seven-week-old black rhino calf Sabi is thriving, already weighing in at 112 kilograms. Named after a Zimbabwean flower that blooms after drought, Sabi is a typically energetic newborn.

While there are more black rhinos left in the wild globally than its Sumatran cousin, there is still only around 6,000 remaining, so it was cause for celebration when Australia’s newest critically endangered calf made her first public appearance at Dubbo’s Western Plains Zoo in NSW.

She is the 15th calf born as part of the zoo’s conservation program, and the fourth to mother Bakhita. The zoo’s black rhino keeper, Hayley Brooks, has been looking after Sabi and said the calf is starting to experiment with solid foods.

Sabi’s birth is a big part of the species protection effort.

“We’re the only breeding institution in Australasia for the black rhino breeding program,” Ms Brooks said.

“Being a female, she will hopefully help continue this program herself by having her own calves. Having successful births is really crucial and Sabi is a very exciting one.”

CLASSROOM ACTIVITIES
1. Shocking facts
Sometimes when trying to prevent something terrible from happening, shock tactics are used in advertising campaigns in an effort to get people to pay attention and take action. Design a print advertisement, with the aim of saving the Sumatran rhinos from those threats posed by humans. Choose some shocking factual information that you learnt from the news story to include. Then carefully choose your words, font, colours and graphics to make people pay attention.

2. Extension
Do you feel hopeful for the survival of Sumatran rhinos? Explain why or why not.

VCOP ACTIVITY
Summarise the article
A summary is a brief statement of the main points of something. It does not usually include extra detail or elaborate on the main points.