New research finds packs of T-rex roamed the Earth, 20,000 at a time A Tyrannosaurus rex (T-Rex) skeleton, named Stan, displayed before its sale at auction in 2020 in New York City, US. Stan is one of the most complete T-rex specimens ever found. Picture: AFP

Billions of T-rexes roamed the Earth, new research has shown.

The giant meat-eating dinosaur – made famous in the Jurassic movies – dominated the world during the Cretaceous period.

Now scientists have calculated that 2.5 billion tyrannosaurs lived and died during their reign*, in a new study published in the journal Science.

Palaeontologist* Steve Brusatte said: “If one bus-sized T-rex biting down on you with the force of (a) pick-up truck isn’t terrifying enough, imagine that about 20,000 of them were probably out there stalking at any given time.

“That’s more or less the number of lions that live in Africa right now. Multiply that by a few million years, and there were probably billions of T-rexes that once lived, which is horrifying.

“It certainly makes me thankful that I live in the UK in 2021 rather than western North America 66 million years ago.

“It also puts into perspective just how rare good T-rex fossils are – only a few dozen decent skeletons have been found. We must cherish* the ones we have in museums now, and keep going out to try to find more.” Lioness and cubs drinking. There were about the same number of T-rex alive at any one time as there are African lions in the wild now. Picture: iStock

The research used fossil records, population data of living animals and computer simulations to estimate how many T-rexes there were.

Scientists calculated that each generation of T-rex lasted about 19 years and that the average population density was about one dinosaur for every 98 square kilometres.

They also estimated that T-rex, which had bone-crunching jaws and powerful hind legs for pursuing prey, had energy requirements halfway between those of a lion and a komodo dragon, the largest lizard on Earth.

Prof Brusatte made the point that we can’t know how accurate the calculations are when we have so few T-rex remains.

“But this a fun study that takes the fossils and the numbers as far as we can, and makes reasonable predictions.”

Researcher Charles Marshall, director of the University of California Museum of Palaeontology, said: “Our knowledge of T-rex has expanded so greatly in the past few decades thanks to more fossils, more ways of analysing them and better ways of integrating* information.

“It’s surprising how much we actually know about them and, from that, how much more we can compute.”

This story was first published on the The Sun and is republished with permission. Running from scary dinosaurs in the 1997 movie Jurassic Park: The Lost World.

T-REX, NOT SO FAST!
Unlike what we’ve seen in the movies, T-rex walked slowly, most likely ambling* around at human walking speed, new Dutch research found.

Working with a 3D computer model of “Trix”, a female T-rex skeleton at the Dutch Naturalis museum, researcher Pasha van Bijlert added computer reconstructions of muscles and ligaments* to find that it’s likely that the dinosaur’s preferred speed was 4.61kmh, close to the walking pace of humans and horses.

In an article on the movement of dinosaurs in the Royal Open Society Science journal, Van Bijlert and his co-authors said T-rex’s huge tail played an important part in its locomotion*.

They looked at how the animal would achieve a natural frequency of movement, factoring in not only leg muscles as in previous studies but also tail movement, that would minimise the amount of energy used.

“The tail would sway up and down with each step (like a giraffe’s neck). If the step rhythm and tail natural frequency were matched, the tail would resonate, maximising energy storage,” Mr Van Bijlert said on Twitter.

However, it’s too soon to assume a human could have outrun a T-rex. The researchers said they were looking at its walking pace and still researching its possible top speeds.

There’s also no possibility of putting the calculations to the test as the species died out more than 60 million years before people appeared on Earth. 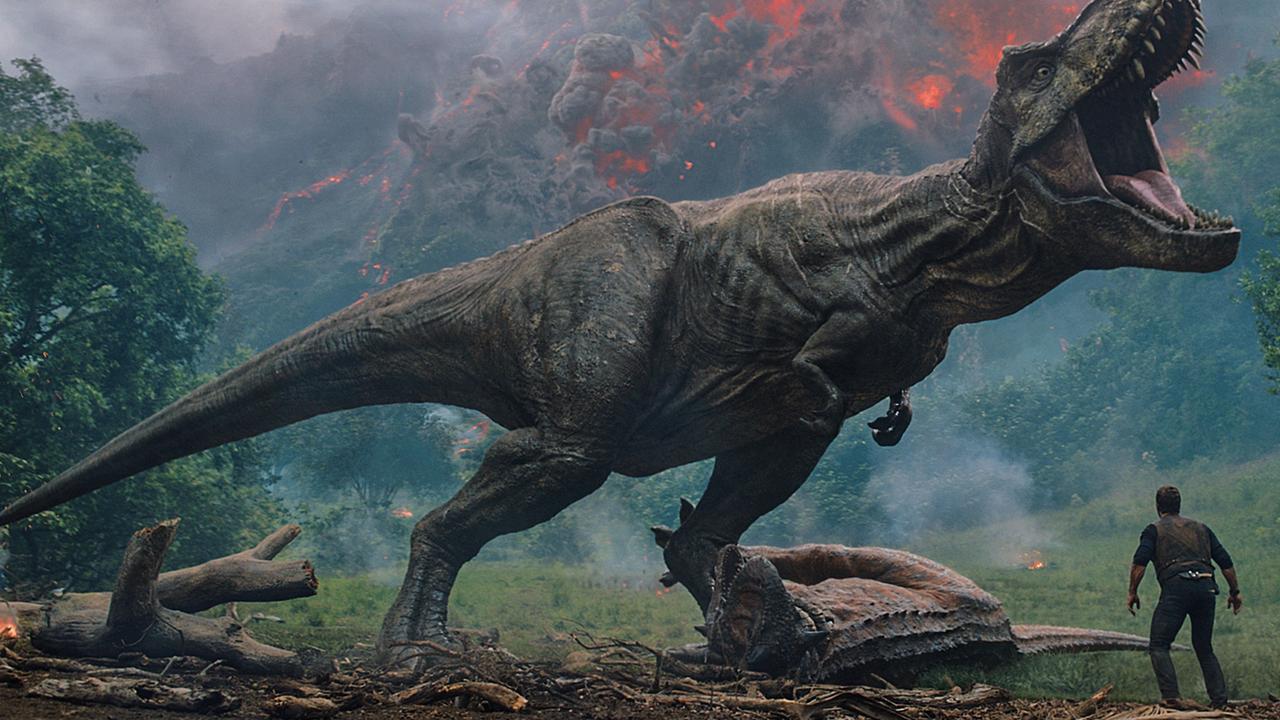 Chris Pratt faces a rampaging T-Rex dinosaur in a scene from film Jurassic World: Fallen Kingdom. Thankfully, T-rex was extinct before humans were around.

LIKE PACKS OF WOLVES
More new research on T-rex reveals the big predators may have hunted in social packs like wolves, rather than solo, as previously thought.

Experts from the University of Arkansas came up with this theory while studying a mass T-rex fossil site in Utah called the Rainbows and Unicorns quarry because of the wealth of fossils there.

The Utah site is the third mass T-rex gravesite found in North America.

The new theory is in contrast to earlier thinking that the remains of many T-rex were found together because they had been washed in from other places.

CLASSROOM ACTIVITIES
1. Disagree!
Steve Brusatte said “It certainly makes me thankful that I live in the UK in 2021 rather than western North America 66 million years ago.”

Disgaree with him! Write a letter to Steve explaining all of the reasons why you think that it would have been fantastic to live in western North America 66 million years ago. Have fun with this and use your imagination.

2. Extension
Create a design for a model T-Rex that shows how and why they moved at the speeds that scientists now believe they did. Don’t forget to label your design to help other kids understand this clearly.