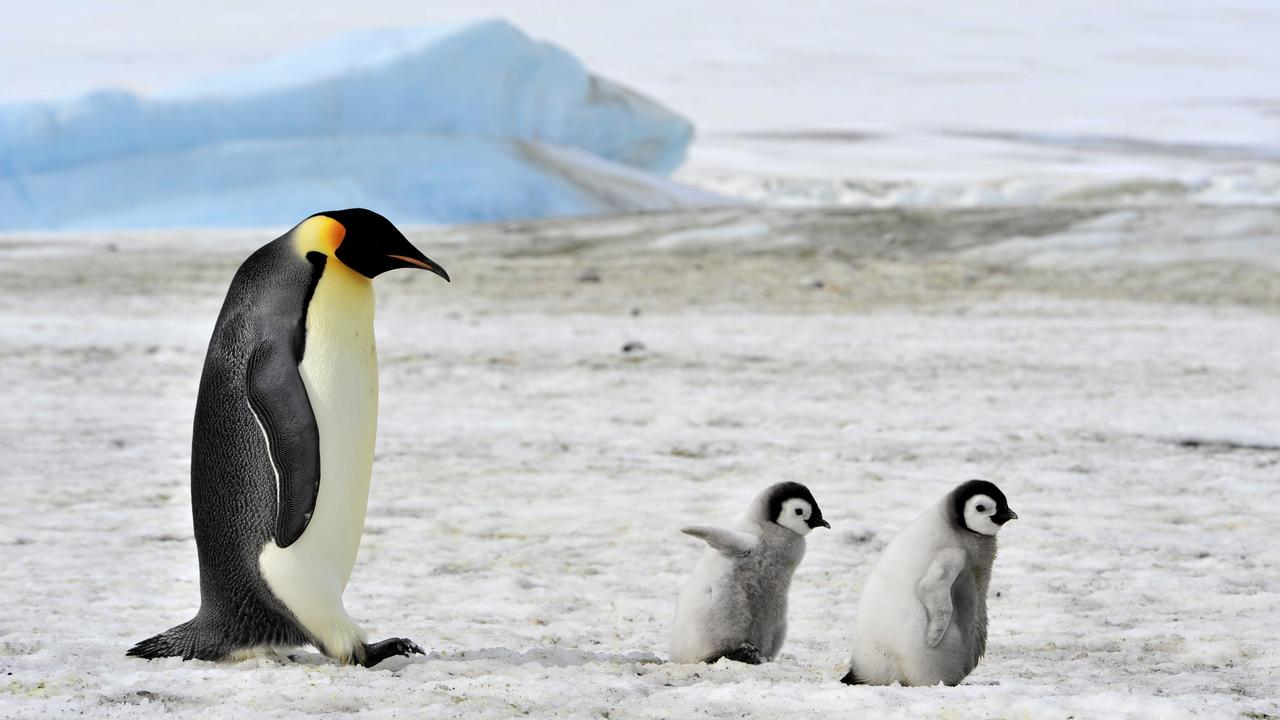 An emperor penguin with two chicks in Antarctica. Picture: iStock

Almost no emperor penguins have hatched for the past three years at Antarctica’s second biggest breeding ground.

And the start of this year is looking just as bleak*, a new study has found.

Usually 15,000 to 24,000 breeding pairs of emperor penguins flock to a breeding site on Antarctica’s Brunt Ice Shelf at Halley Bay each year, considered a safe place that should stay cold this century despite global warming. But almost none have been there since 2016, according to a study in a science journal called Antarctic Science.

The breeding pair population has increased at a nearby breeding ground, but the study’s author said it is nowhere near the amount missing at Halley Bay.

“We’ve never seen a breeding failure on a scale like this in 60 years,” said study author Phil Trathan, head of conservation biology at the British Antarctic Survey. “It’s unusual to have a complete breeding failure in such a big colony*.” Scientists blame the reduced numbers on climate and weather conditions that break apart the “fast ice” — sea ice that’s connected to the land — where the emperor penguins stay to breed. The male penguins incubate their eggs and tend to their chicks — one for each pair — on ice. After breeding and tending to the chicks, the penguins move to open sea.

While that’s encouraging, it doesn’t make up for all that was lost at Halley Bay, Dr Trathan said. “Not everybody (all the emperor penguins) has gone to Dawson Lambton yet,” he said.

What’s worrying isn’t that part of the colony has moved to Dawson-Lambton, it is that scientists thought of Halley Bay as a climate-change refuge* in one of the coldest areas of the continent “where in the future you expect to always have emperors,” Dr Trathan said. Scientists use satellite photos to check whether penguins are using breeding grounds. The brownish patches show where the penguins are. This combination of parts of satellite photos provided by Maxar Technologies via the British Antarctic Survey shows the Dawson Lambton emperor penguin colony in 2016, with a slight increase in 2018. Picture: AP

David Ainley, a marine* ecologist* and penguin expert at the environmental science company H.T. Harvey & Associates, worried that some people will be more alarmed than they need to be because many of the penguins didn’t disappear, but just moved.

While not as scary as it may sound initially, with climate change “long term, it’s another question as alternate breeding sites likely will become harder to find,” said Dr Ainley, who was not part of the study.

The study makes sense, and sometimes dramatic* environmental change can cause a breeding failure like this, said Stephanie Jenouvrier, a penguin expert at Woods Hole Oceanographic Institution who wasn’t part of the study.

Dr Trathan said a super-strong El Nino — a natural cyclical* warming of the central Pacific Ocean that changes weather worldwide — melted sea ice more than usual and exposed the fast ice to wind and waves, making the breeding home less stable. He said it’s not possible to say yet if human-caused warming — from fossil fuel* burning that creates heat-trapping gases globally — is partly to blame.

A 2014 study by Dr Jenouvrier predicted that because of climate change the global population of emperor penguins will likely fall by at least 19 per cent by the year 2100.

The breeding colony failure, Dr Trathan said, “is a warning of things that might become important in the future.” All penguin species live in the Southern Hemisphere except the Galapagos penguin.

Adult emperor penguins are black and white with yellow ears and chests.

They are the largest penguin species, weighing up to 40kg and standing 1.1-1.3m tall.

In contrast, the species called little penguins stand about 30-35cm tall, weigh about 1.5kg and only live for about six years. Little penguins are found in Australia, New Zealand and possibly Chile.

Emperor penguin pairs breed in winter and the male incubates the pair’s egg.

King penguins at risk of dying out

CLASSROOM ACTIVITIES
1. Making numbers visual
There are lots of facts and figures in this news article. One way to make facts and figures easier to understand is by presenting them as graphs or infographics. Make some of the figures from the article simple to process at a glance by doing the following:

VCOP ACTIVITY
Try and come up with two reasons why you think the penguins stopped breeding at Halley Bay.

One of these reasons is to be more factual. You may like to use elements from the article to support your reason.

The other reason I want you to pretend the penguins are more like us and have to make decisions based on more humanly thoughts, feelings or emotions — like the view or the neighbours etc.

Which reason do you like the best and why?

HAVE YOUR SAY: Would you like to work as a scientist in Antarctica? Do you think you could cope with the cold?
No one-word answers. Use full sentences to explain your thinking. No comments will be published until approved by editors.