It is all too easy to imagine just how dangerous the assassin spider’s leaf litter habitat became as fire tore across Kangaroo Island, as shown in this image of hay bales n Friday, January 10, 2020. Nearly half of Kangaroo Island was damaged by the fires. Picture: AAP Image

It is tiny, elusive* and skilled at killing prey using its long jaws.

But while these creatures have a reputation as clever hunters, it was feared Kangaroo Island assassin* spiders had been completely wiped out themselves by the region’s Black Summer fires in 2019/2020.

SA Museum honorary research associate Dr Jessica Marsh has ended that grim speculation* with the discovery of two of the arachnids* in leaf litter on private land in the island’s northwest. A pair of Kangaroo Island assassin spiders has been found nearly two years after the Black Summer bushfires sparked fears the species had been completely wiped out.

“When I saw it, it was just amazing,” Dr Marsh said, after making about 20 trips to potential habitat* sites on the island.

“We’d been out surveying quite a lot and I was starting to lose hope. We were wondering if we’d ever find one.

Dr Marsh said it was not known how many assassin spiders were on the island before the fires, which destroyed their only previously known habitat. Bushfires swept through Kangaroo Island during Black Summer – this image was taken on January 10, 2020. It was feared assassin spiders were among endangered species wiped out by the disaster. Picture: AAP Image

They live in leaf litter suspended* in plants and are extremely vulnerable* to bushfire, fragmentation* and habitat loss.

“It’s great that we’ve found these spiders and that (they’re) not extinct – however, they’re not out of the woods,” Dr Marsh said.

“What we really need to do is put a lot of work into identifying their threats and how best to manage them.”

Dr Marsh’s survey work was funded through a Landcare grant.

Entomologist* Dr Richard Glatz has also been looking for threatened insects following the island’s bushfires – with 10 of particular interest. 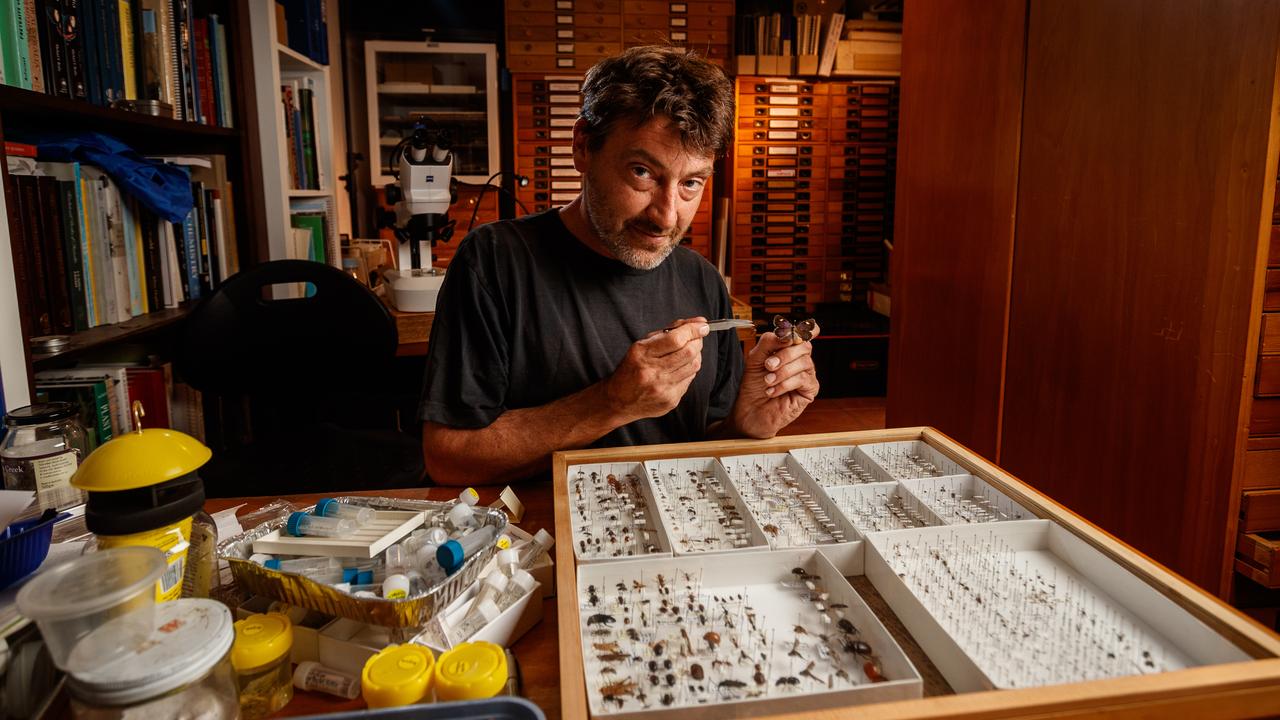 Entomologist Dr Richard Glatz with some of his insect collection on Kangaroo Island. Picture: Matt Turner

“Five we found and five we couldn’t, probably because we just didn’t find them rather than they’re gone, but you’re dealing with a situation where there are two crickets that were collected in the 1800s at Cape Borda under bark that have never been seen again,” he said.

Dr Glatz said invertebrates* made up 95 per cent of the land-based animals in Australia but little was known about these animals compared with mammals, birds and reptiles, which were much more popular to study.

“They do pollination* and seed dispersal*, they regulate each other’s population and do all this stuff that runs the ecology* but hardly any of those things are protected,” Dr Glatz said.

“A lack of knowledge is almost the biggest impediment*.”

CLASSROOM ACTIVITIES
1. Assassin spider threats
To ensure the assassin spider’s future survival, Dr Marsh said it’s important to identify its main threats and how to manage them. Work with a partner to list what you think the main threats might be to this spider, and how to eliminate these so you can ensure their survival. Divide your page in half and make your lists side-by-side under the headings THREATS and HOW TO ELIMINATE THEM

2. Extension
Why is one small spider so important to the environment and ecology?

Why do you think mammals, birds and reptiles are more popular for scientists to study?