Study finds apes mind their manners much like humans The study found that ape species including chimpanzees use gestures and contact to mark the start and end of social interactions just as humans do. These chimpanzees at Sydney’s Taronga Zoo were not part of the study. Picture: Toby Zerna.

Many people think that leaving a social situation without saying goodbye is rude – and it turns out that apes would agree.

As humans, we typically say we are leaving, shake hands or use other body language to signal when interactions*with others are ending.

Now scientists have discovered that apes such as bonobos and chimpanzees have a similar system, using gestures and physical contact to start and finish play or grooming* sessions. Durham University researchers said that common etiquette* includes butting heads, holding hands, gazing at and touching each other. Female bonobos play together at the Planckendael Zoo. Bonobos and chimpanzee were the two ape species whose interactions formed the basis of the study. Picture: AFP/ Georges Gobet.

Researcher Dr Raphaela Heesen said that the apes used the same sense of commitment as humans when they signalled each other to talk or play together. They also used the same signals to bring the interaction to an end.

The closer the relationship between the animals, the shorter the gestures, researchers found. “When you’re interacting with a good friend, you’re less likely to put in a lot of effort in communicating politely,” Dr Heesen said. The ability to collaborate* on joint projects and activities was seen as a particularly human trait*, made easier by our ability to communicate through language, but co-operation and teamwork could also be seen in our primate cousins.

“We were able to land on the moon because we have the ability to share our intentions, which allows us to achieve things so much bigger than a single individual can achieve alone,” Dr Heesen said. “This ability has been suggested to be at the heart of human nature.”

While the scientists were already aware that apes used signals to begin interactions, prior to the study they did not know if they did anything to mark ending and leaving them.

“Do they just walk off and unilaterally* abandon their partner?” Dr Heesen said. “Or is it important to communicate something about the end of the encounter?”

She said some earlier studies had compared apes with children who had not learnt to talk. When an adult played with a youngster then suddenly stopped, the child would protest and want to keep playing. The chimpanzees did not appear to protest and so it was assumed that they did not require a signal to end an interaction.

She said, however, that she had seen two bonobos interrupted while grooming each other. They then gestured to signal that they wanted to resume the grooming. 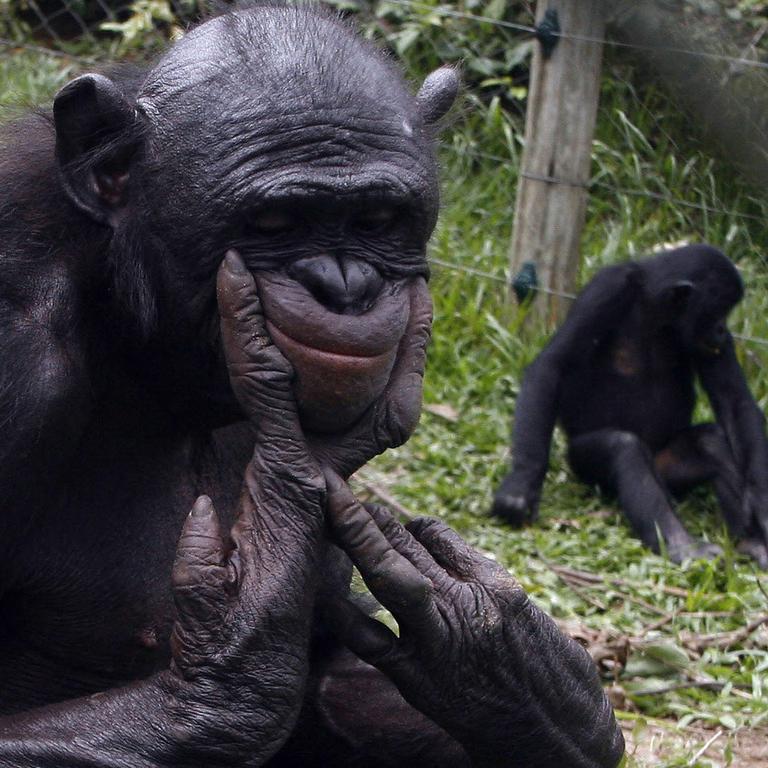 Touching and hand gestures were observed by researchers to be part of the system of greeting and farewell used by bonobos and chimpanzees.

She said that the study suggested the concept of “joint commitment” to shared endeavours* might have evolved in our primate ancestors. The study found that the behaviour among bonobos, in particular, had “some similarities to what, in humans, is considered ‘social etiquette’.”

Previous studies have found that even humans struggle when trying to end social interactions. A study this year examined 932 conversations, finding that only 2 per cent ended at the point desired by both participants.

This story was originally published in The Times and is republished with permission.

‘Missing link’ between apes and humans

CLASSROOM ACTIVITIES
1. Social Encounters
Conduct a social experiment in groups of three with your classmates. Try and make your group of three a mix including one person you know fairly well and one person not so well.

Sit opposite person one and have a two minute conversation using only hand gestures and lip movements. Try and tell the person one thing you enjoy doing or something you did on the weekend.

Sit opposite person two and do the same thing.

After your conversations, discuss how the interaction changed between the two people and what was harder or easier.

2. Extension
Work with a classmate and discuss some things you find socially rude. It could be in the playground, at sports, at after-school activities, or do with parties and birthdays. Ask the other person if they agree and whether you may do some of these things without being aware.