Best in show at the famous Westminster Kennel Club dog show, Wasabi the Pekingese is unfazed by all the attention and fuss and doesn’t seem very interested in his giant trophy. Picture: Timothy A. Clary/ AFP)

Wasabi was the flavour of the year at the Westminster Kennel Club dog show in the US.

A Pekingese named after the Japanese horseradish* won best in show on June 13, only the fifth-ever win for the distinctive* toy breed. A whippet named Bourbon was named runner-up for the second time.

Waddling through a small but mighty turn in the ring, Wasabi nabbed American dogdom’s biggest prize after previously winning the American Kennel Club National Championship in 2019. 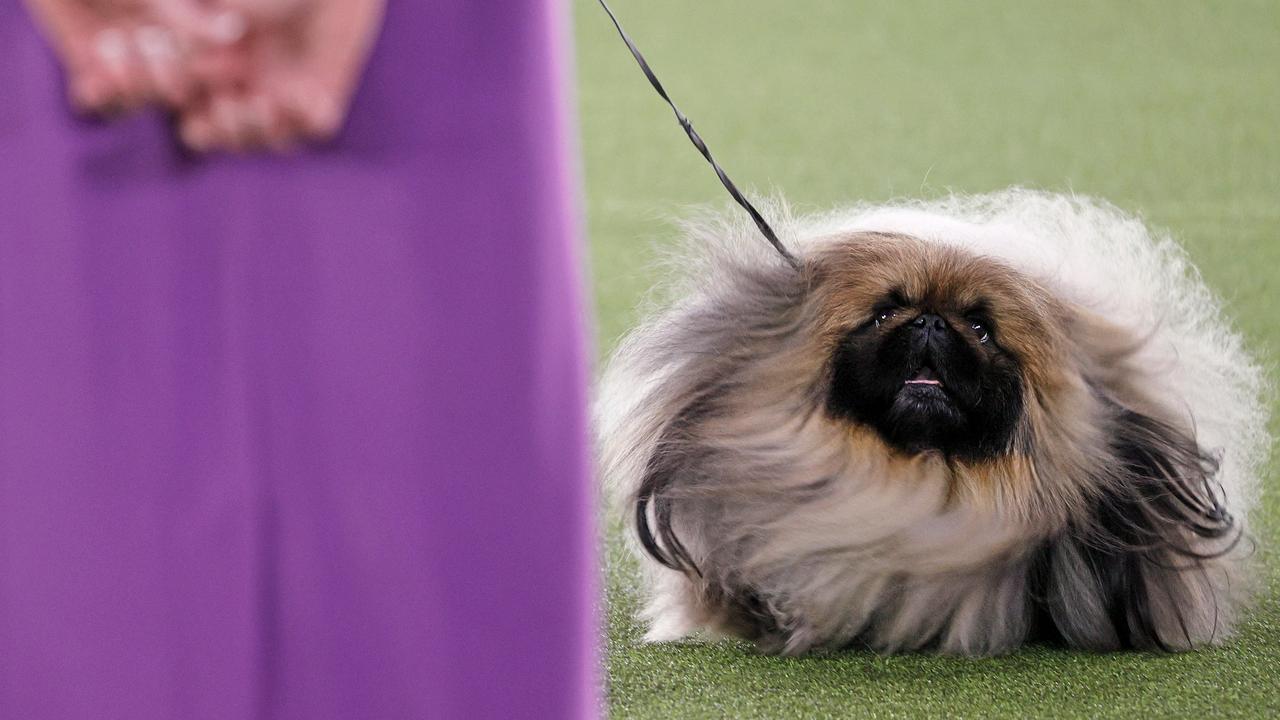 “He has showmanship*. He fits the breed standard. He has that little extra something, that sparkle, that sets a dog apart,” said Wasabi’s handler, breeder and co-owner, David Fitzpatrick.

Show judge Patricia Trotter said, “What’s not to like about this dog? He stood there as though he was a lion.”

How will Wasabi celebrate?

“He can have a filet mignon*,” Fitzpatrick said with a laugh.

The 3-year-old Pekingese was “pretty nonchalant* about the whole thing,” his handler said. Indeed, Wasabi stretched out on the dais, occasionally looking up as if wondering what all the fuss was about, as Fitzpatrick spoke in front of reporters and cameras.

It was a special win, since one of his four co-owners sadly died last year of Covid-19. 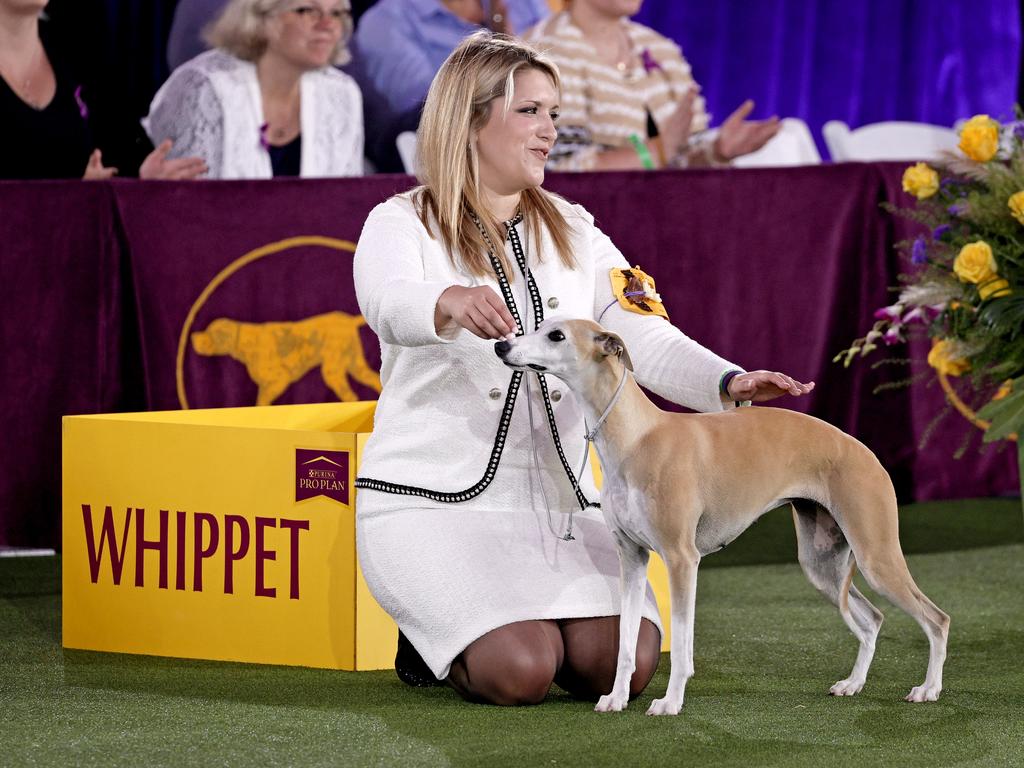 Bourbon the whippet is named runner up in the Best in Show category for the second time at the Westminster Kennel Club dog show. Picture: Getty Images

Wasabi — the name came from his mother, Sushi — came out on top of a finalist pack that also included Mathew the French bulldog, Connor the Old English sheepdog, Jade the German short-haired pointer, Striker the Samoyed, and a West Highland white terrier named Boy. Altogether, 2500 champion dogs entered the show.

The Westminster show had its own makeover* this year due to coronavirus, moving out of New York City for the first time since its 1877 founding*. This year’s show was at historic Lyndhurst Mansion, a gothic* estate from 1838 that is about 40 kilometres north of New York’s famous Madison Square Garden, where the competition is usually held. In another first, the event also moved from chilly February to summery June so the event could be held outside.

Some handlers wore masks — although vaccinated people were allowed to go without — and the show was closed to the public.

“It’s a miracle that they even had this show,” Fitzpatrick said.

Striker the Samoyed entered the show as the top-ranked US dog, with more than 40 best in show wins since January 2020. Bourbon had also won the AKC National Championship.

Boy had come a long way to Westminster — all the way from Thailand in Southeast Asia, where one of his owners was watching from Bangkok, according to handler Rebecca Cross. Striker the Samoyed struts his stuff at the 145th Annual Westminster Kennel Club Dog Show in New York while his owner apparently watched on television at home in Thailand. Picture: Getty Images

For many dog owners, just making it to Westminster is a thrill — even for baseball’s all-time home run leader, Barry Bonds, who was cheering on Rocky, a miniature schnauzer he owns with his sister.

The 56-year-old baseball legend with 762 career home runs said he was proud of Rocky just for qualifying for the championship.

“We won because we got here. That’s all that matters,” Bonds told Fox Sports.

Douglas Tighe, who handled a Brittany named Pennie who came second place in the sporting group, said he just goes with it if his dogs get distracted by birds and other attractions in the great outdoors.

“Let them have fun,” said Tighe, of New Jersey. “That’s what it’s all about.”

Fun is certainly what it’s all about for Kole Brown from Texas. At age 9, he showed a bull terrier named Riley alongside his parents, Kurtis Brown and US air force captain Samantha Brown, and some of the family’s other bull terriers.

“I have a lot of fun with this sport,” said Kole. “Every single time I go into the ring, I have a smile on my face.”

Reuters reported the show as one of the oldest and most popular sporting events in the US and said more than 200 different purebred breeds can compete. While Wasabi and his furry friends were being coiffured* and combed north of New York, closer to home an Edenhope-bred kelpie named Hoover sold for $35,200 at the Casterton working dog auction in Victoria on June 13.

The two-year-old, who works with goats, sheep and cattle, sold to a sheep and cattle farmer from the northeast of the state for $12,000 more than the previous record-breaking price, making him the world’s most expensive kelpie. Hoover, centre, is the most expensive working dog in the world after his trainer-owner David Lee sold him at auction for a record $35,200.00. Hoover is pictured with Fancy the quarter horse, David and Sarah Lee, their children Tommy, 7, and Ivy, 3, and black kelpie Chief, who sold for $6000. Picture: Nicole Cleary

The previous record was $22,200, but Hoover smashed the record due to his ability to work with sheep, cattle and goats in yards and paddocks alike.

It’s the most money ever paid for a working dog.

Sold by David and Sarah Lee, Hoover was advertised on AuctionsPlus as having a ‘great natural feel for stock in paddock’.

‘(Has) had lots of work on large mobs and is (the) complete package with a cool personality’, the Lees wrote.

Ms Lee said it would be “very hard” to part with the dog, but they would meet with the new owners to help transition* Hoover.

“We help transition the dog to (his) new home so we know he will be happy there,” she said.

“It was just the perfect all-round dog and was very well bred with good bloodlines.” At left, Hoover set a world record price of $35,200 at the Casterton working dog auction on June 13. He was bought by a sheep and cattle farmer based in northeast Victoria. He is with the Lee family, who will help him transition into his new home, and black kelpie Chief. Picture: supplied.

CLASSROOM ACTIVITIES
1. Acceptance Speech
Write an acceptance speech for Wasabi the dog to deliver to all his adoring fans. Make sure you thank the people important to him (mentioned in the Kids News article) and explain why he thinks he won the prestigious competition.

You may want to record your speech using your best award-winning dog voice!

2. Extension
$35,000 is a lot of money to pay for a sheepdog. How do you think Hoover’s new owners will keep him safe and healthy so he can be a productive worker on their farm?

Why do you think he may be worth that money?

VCOP ACTIVITY
Stretch your sentence
Find a ‘who’ in the article – a person or animal. Write it down.