The king of the dinosaurs may not have been so mighty after all.

An international team of scientists — led by a palaeontologist* at the University of New England in New South Wales — have re-examined 100 years of dinosaur research.

They now believe the average T-rex may have weighed in at less than half of some previous estimates. The fearsome predator likely weighed on average seven tonnes, with individuals weighing between three and 18 tonnes.

The trouble with estimating dinosaur weights is that the only bits left are the bones. That’s good for working out the length and height of the extinct animals but not necessarily the mass*.

But by combining the most effective ways of measuring mass and body size in papers from 1905 onwards, palaeontologists have pieced together what they feel is the most accurate picture of the most famous dinosaur.

The first is to take the bones and use modern animals with similar features to scale up their weight – for instance, measuring the circumference* of an arm or a leg of a living creature and then multiplying it by the size of the T-rex equivalent bone.

This provides an accurate idea of the body mass but not what the animal may have looked like. 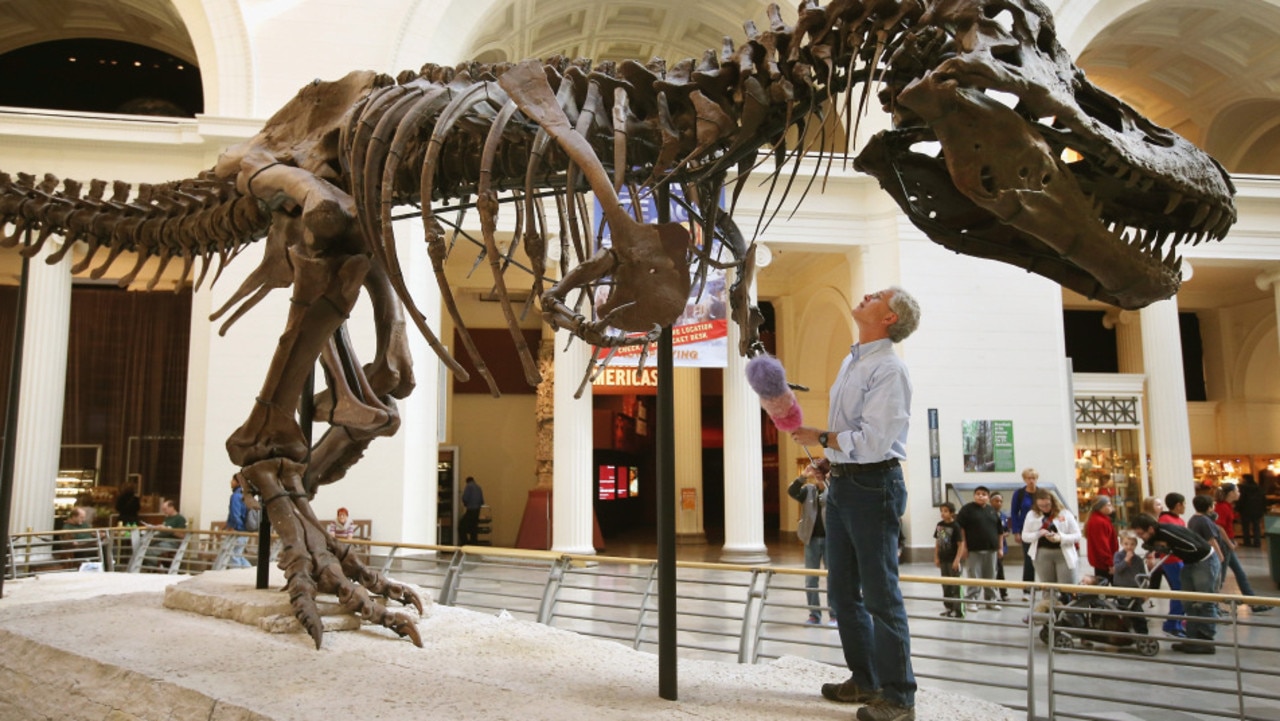 Dinosaur weights are just estimates based on their bones and what their flesh could have weighed. Picture: Getty Images

The second method is to use computer remodelling programs based on the skeletons. This is believed to be a more accurate way to show what the dinosaur looked like, but not all that useful on its own to predict body mass.

The palaeontologists told the journal Biological Reviews that for this study, they combined the two methods.

Study leader Dr Nicolas Campione of the University of New England, said: “Body size, in particular body mass, determines almost all aspects of an animal’s life, including their diet, reproduction, and locomotion*.

“If we know that we have a good estimate of a dinosaur’s body mass, then we have a firm foundation from which to study and understand their life retrospectively*.

“It is only through the combined use of these methods and through understanding their limits and uncertainties that we can begin to reveal the lives of these, and other, long-extinct animals.”

Co-author, Dr David Evans of the Royal Ontario Museum in Canada added: “There will always be uncertainty around our understanding of long-extinct animals, and their weight is always going to be a source of it.

“Our new study suggests we are getting better at weighing dinosaurs, and it paves the way for more realistic dinosaur body mass estimation in the future.” Previous estimates have said the T-rex could have weighed up to 18 tonnes. Picture: Getty

T-REX
Ferocious predator Tyrannosaurus rex was about 12m long (the length of a big bus) and about 4.6 to 6m tall.

It had strong thighs and a massive tail and it most likely used its 1.5m-long skull to bore into its prey.

It could probably eat about 230kg of meat in one bite.

Like crocodiles, T-rex laid eggs, but was more closely related to birds than to modern reptiles.

T-rex lived in forests in river valleys in North America until the species became extinct 65 million years ago.

2. Extension
If the only things we have left of the dinosaurs are bones, how do you think scientists work out what they looked like, other than their size? List as many ways that you can think of for things such as their skin, their colour, their shape and any other features.

HAVE YOUR SAY: What extinct animal would you study?
No one-word answers. Use full sentences to explain your thinking. No comments will be published until approved by editors.