Buckets of water helped the baby minke whale until the tide rose enough for it to swim back out to sea. Picture: Facebook

A baby minke whale beached in South Australia has been saved.

The whale was reported beached on Monday night at Spalding Cove, south east of Port Lincoln.

“It was seen being chased ashore by a dark shadow,” said Mr Smith. Port Lincoln SES said on its Facebook page that on arrival the whale was 100m offshore but in shallow water.

“Fortunately the tide was on the rise. Our crew alongside a couple (of) members of the public continued to pour water over the whale and eventually it managed to turn itself around to face the open ocean. It was last seen heading into deeper water.”

Many people think beachings are happening more than in the past or happen more in summer, but it may just be that news travels farther and faster than in the past and that we visit beaches more often to notice beached whales in summer. 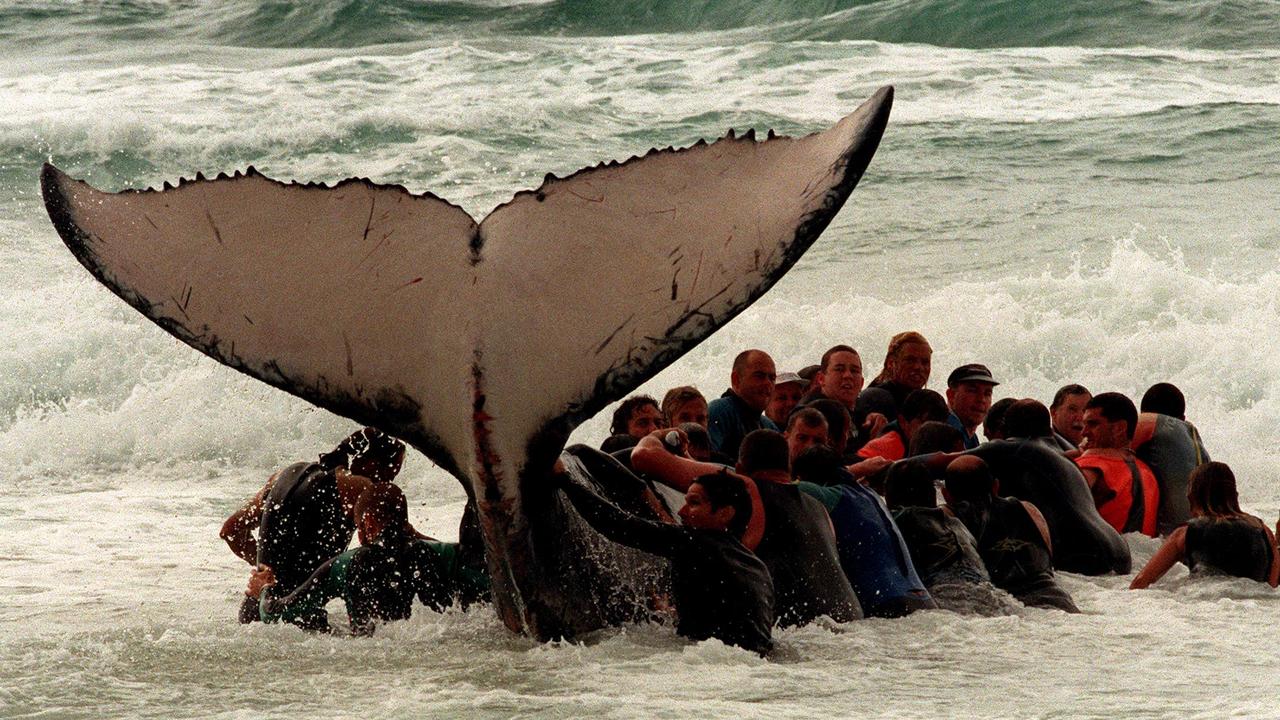 A baby humpback whale being rescued after beaching itself on Coolum’s main beach on Queensland’s Sunshine Coast in 1996.

The largest recorded beaching was in the Chatham Islands of New Zealand in 1918, when around 1000 whales became stranded.

Often, a whale becomes beached on its own because it is sick.

Scientists believe mass strandings happen for a variety of reasons and they aren’t always sure what the reason for a particular mass stranding is. 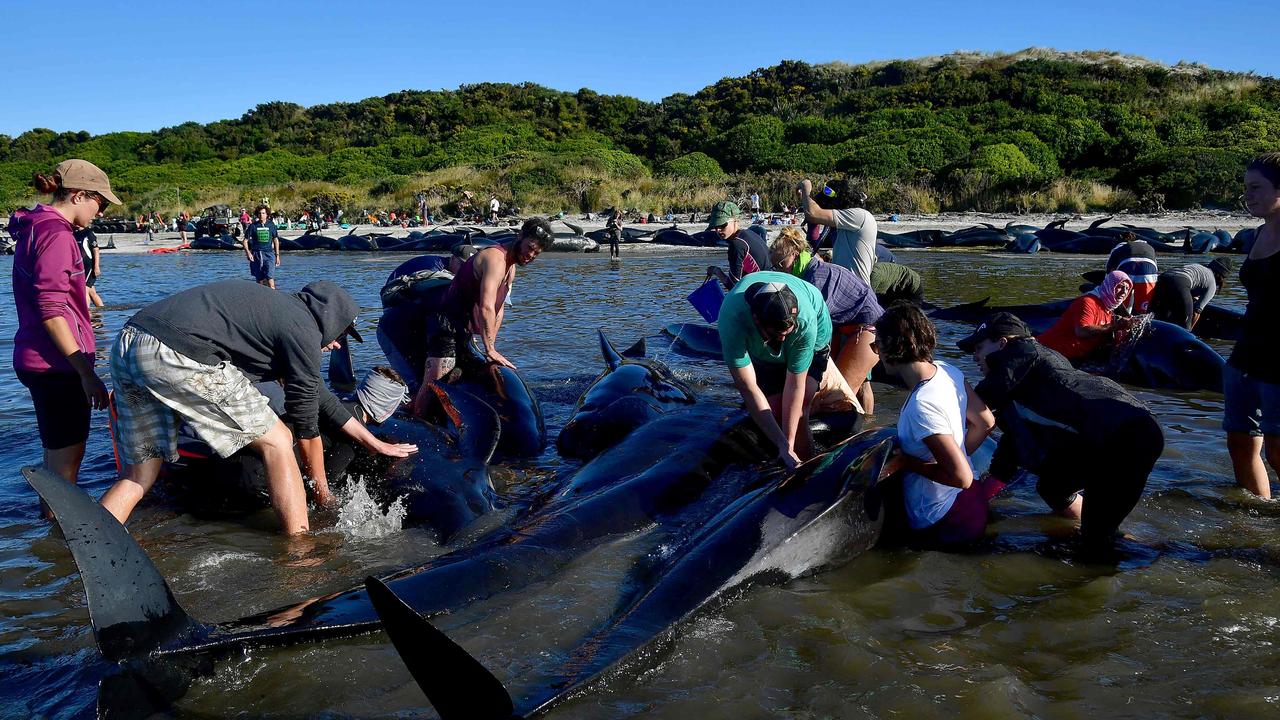 Research by scientists at the University of Tasmania has found that weather can cause a mass stranding. When currents or wind carry food close to a wide, gently sloping shoreline the whales follow food up onto a beach.

Scientists are aware of mass strandings that have occurred because one whale in a pod gets an ear infection, which means it can’t navigate well. When it becomes stranded, it calls in distress to others in the pod. It is thought that noise and sonar waves (used for communication and navigation) from ships and submarines also confuse whales.

Sometimes illness caused by an algal bloom or a virus can cause a mass stranding.

This is the second smallest species of baleen whale, growing to about 10m long.

They have a sleek, pointed head, narrow pointed flippers each with a white stripe and a curved dorsal* fin set well back on the body.

Minke whales in the southern hemisphere feed mostly on krill.

They are not a migratory* whale but do move relatively short distances to find water at the right temperature to mate and breed.

Baleen whales have baleen plates in their upper jaws rather than teeth. The plates allow them to feed by filtering small animals out of large quantities of water.

Some other baleen species include southern right whales, humpback whales and blue whales, which are the largest living animals and are thought to be the largest animal ever to have lived on Earth. Minke whales are a small species of baleen whale and, in southern waters, feed mostly on krill. Like other baleen whales they filter food out of the water they take into their mouths.

Photo of the year tells a whale’s tale

CLASSROOM ACTIVITIES
1. Create a movie trailer
Work with a partner and write an outline for a movie based on the beaching of this baby minke whale. In your outline include the following details:

Now design a movie trailer for your soon-to-be-released movie. If you have access to iPads or computers you might want to use software such as iMovie or Storyboard That. If you don’t, you can create a storyboard on poster paper pitching your movie.

A trailer advertises your upcoming movie and your motive is to make your trailer so spellbinding and interesting that people want to go to the cinemas to see the movie.

You need bold statements, clips from the movie and a teaser about what happens.

On a storyboard presentation, include your images and spoken statements on each page so you can present to the class.

2. Extension
What should you do if you see or hear of a beached whale? How could we help prevent whales being stranded?

HAVE YOUR SAY: Have you ever seen a beached whale? Would you like to help rescue a whale if you could?
No one-word answers. Use full sentences to explain your thinking. No comments will be published until approved by editors.