15 amazing sculptures around the world Earth has a surface area of 510.1 million square kilometres.

Imagine setting out to try to see everything there is to see on Earth, if that was even possible in one human lifetime.

Earth is so big and so absolutely chock-a-block* with things to see it’s hard to know where to start looking, whether you’re physically travelling or armchair travelling* with books, photos and film.

So to help you out and get you started, we’ve compiled this collection of 15 incredible sculptures to look at and learn about.

MOTHER NATURE, CANADA
Completely crafted from plants, the impressive Mother Nature sculpture and water feature (at the top of the page) looks as though she’s risen straight up from the earth. Expect to hear a few spontaneous* shouts of “Moana!” when you visit – the nearly 15m tall sculpture looks a bit like the character Te Fiti from the Disney movie Moana, making it one of the most popular attractions in the park.
LOCATION: Jacques-Cartier Park, Gatineau, Quebec, Canada 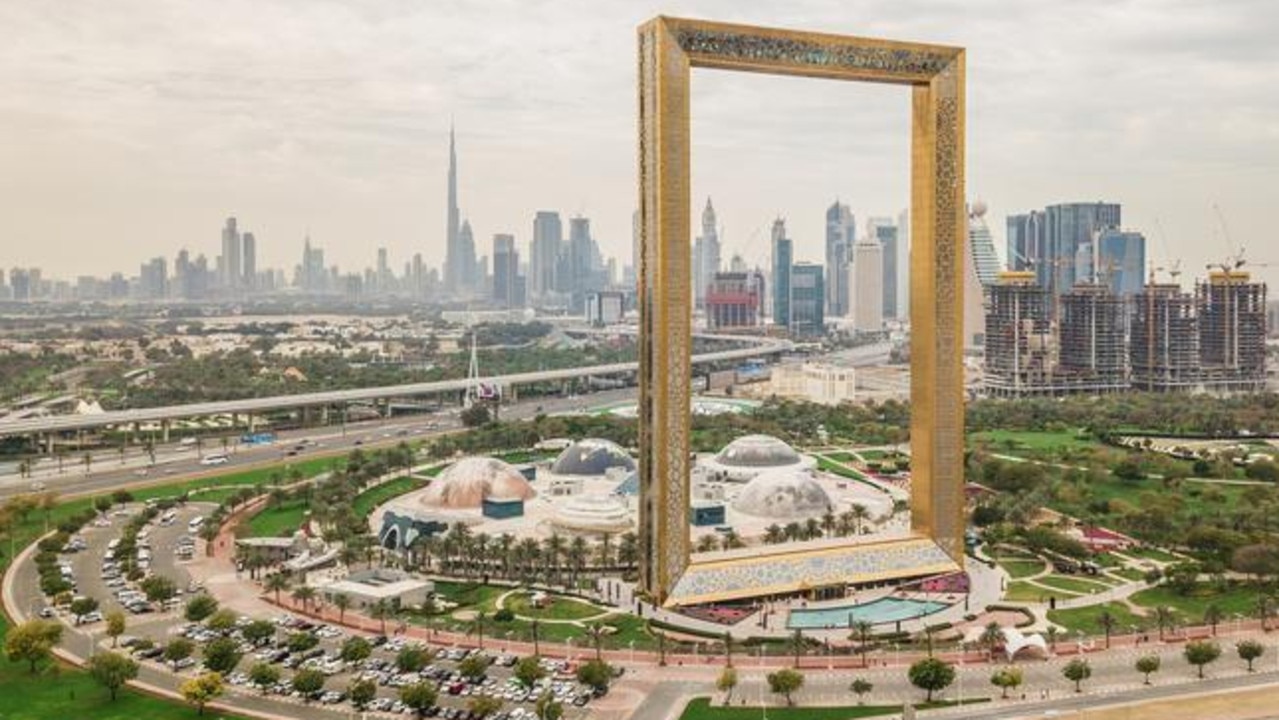 DUBAI FRAME, UNITED ARAB EMIRATES
Dubai is the home of the tallest skyscraper, largest shopping mall and longest driverless metro system, so it comes as no surprise that it also hosts the world’s largest picture frame, erected in 2018.

The 50-storey Dubai Frame made headlines when the original architect and the Municipality of Dubai were in a legal dispute over ownership of the copyright* for the building, soon earning it the title of the “biggest stolen building of all time.”
LOCATION: Zabeel Park, Dubai, United Arab Emirates NEST, INDONESIA
In the shallow waters of Gili Meno is Nest, a hauntingly beautiful sculpture where 48 life-size human figures are standing and curled up on the seabed.

Renowned sculptor and environmentalist Jason deCaires Taylor used casts of real people to assist with the process, providing each figure in the sculpture with their own unique facial expression.
LOCATION: Gili Meno Island, Indonesia JATAYU EARTH’S CENTER, INDIA
As the Hindu epic goes, Jatayu was a noble bird who lost a wing when rescuing the abducted goddess Sita from the demon-king Ravana. As the vulture king tried to protect her, Ravana chopped off one of Jatayu’s wings where he fell on a rock. In time, the rock got the name Jatayupara and this is where the monumental statue and recording-breaking bird sculpture is now built.
LOCATION: Jatayu Nature Park Road, Kerala, India 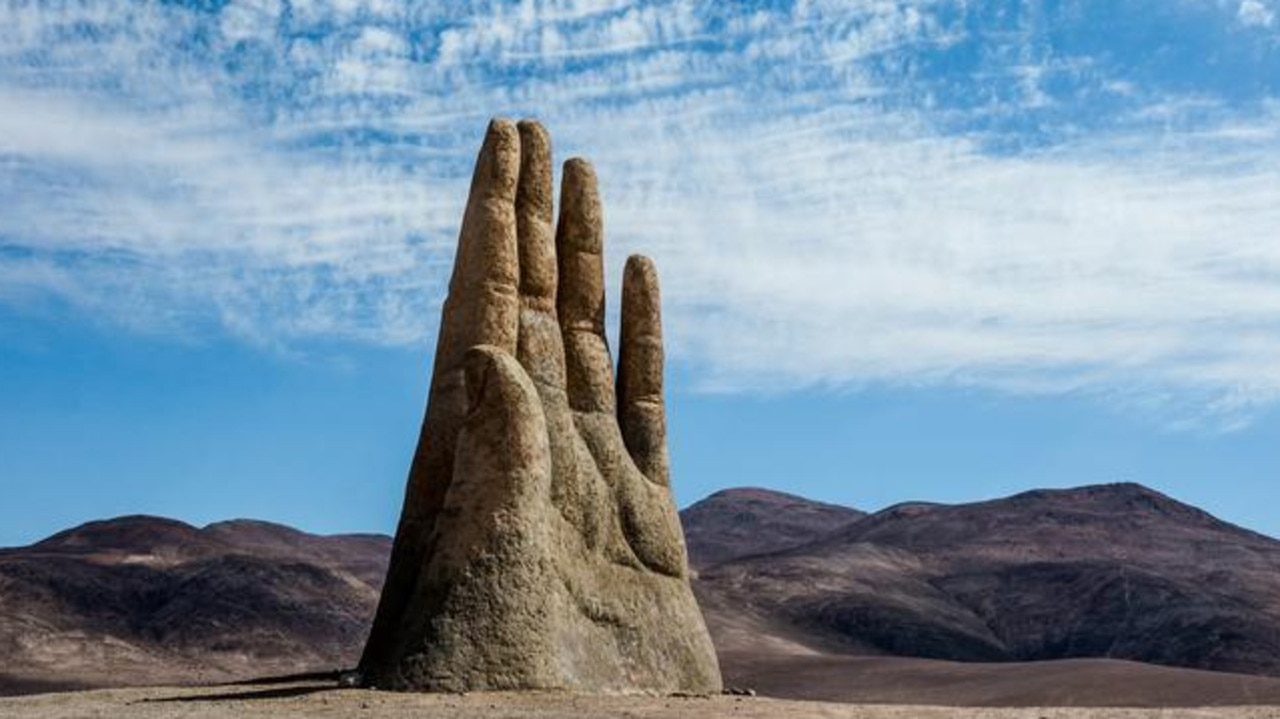 Hand of the Desert, Chile.

HAND OF THE DESERT, CHILE
Emerging from the ground in the middle of the Atacama Desert are four concrete outstretched fingers and a thumb, considered by locals as a hi-5 from the land. The hand was constructed more than 25 years ago by artist Mario Irarrázabal, who intended for the isolated sculpture to represent human vulnerability and helplessness – two feelings anyone who has run out of petrol here can totally understand.
LOCATION: Antofagasta, Chile 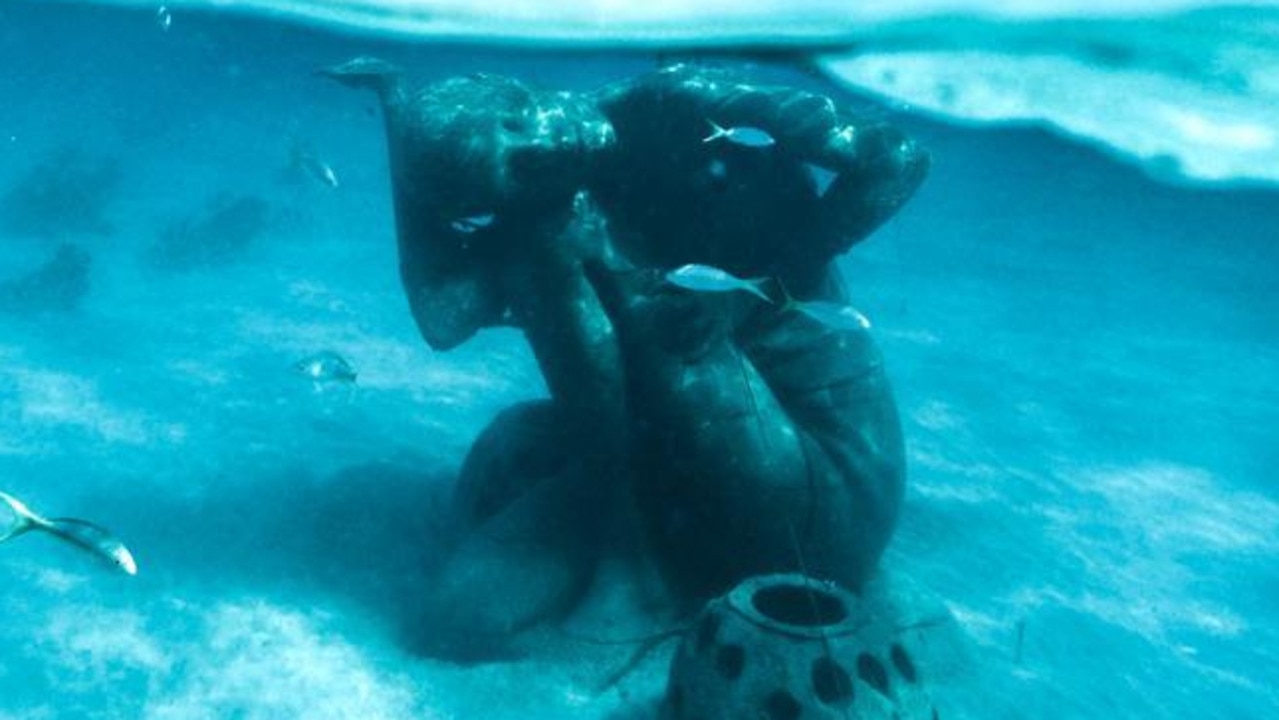 OCEAN ATLAS, BAHAMAS
Submerged off the coast of Nassau in the Bahamas is currently the largest underwater sculpture in the world. Ocean Atlas, also by Jason de Caires Taylor, depicts a girl carrying the ocean on her shoulders. Her name, Atlas, comes from the Greek god responsible for bearing the heavens on his shoulders.
LOCATION: Nassau, Bahamas THE KELPIES, SCOTLAND
The Kelpies has been the largest equine sculpture in the world since its construction in 2013. The 30m high sculptures depict shapeshifting water spirits, which are known to possess the strength and endurance of 10 horses; a quality that is associated with the endurance of Scotland’s inland waterways.
LOCATION: The Helix, Scotland, United Kingdom 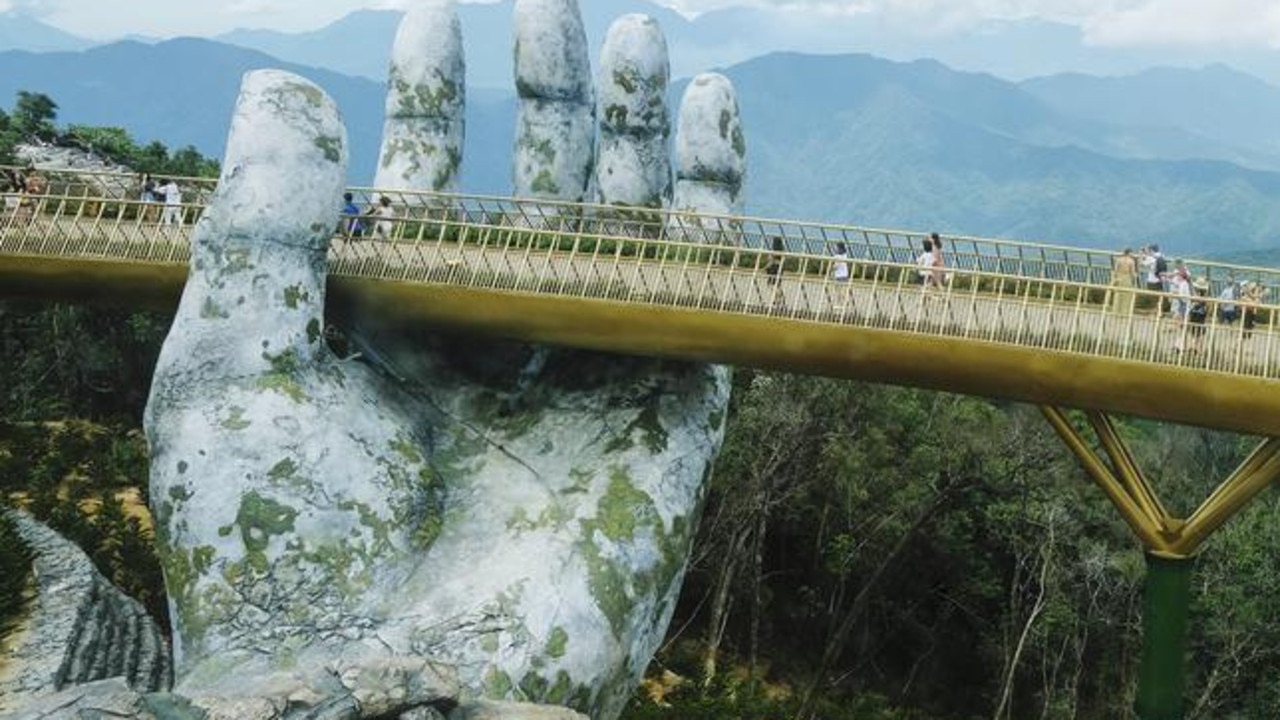 GOLDEN BRIDGE, VIETNAM
Suspended 1400m above sea level in Vietnam’s Ba Na hills, the aptly named Golden Bridge is held up by two giant stone hands. The $2 billion shimmering structure extends along 150m and opened in June 2018 in a bid to lure more tourists, which so far has proven to be a success with people flocking to the bridge daily.
LOCATION: Đà Nẵng, Vietnam EMIRATES A380, DUBAI MIRACLE GARDEN
Dubai’s largest flower garden is an attraction that people travel to see, but it’s the resident passenger plane covered in greenery that keeps the crowds returning. In the heart of the garden is a life-size replica of an Emirates Airbus A380, covered in five million flowers.
LOCATION: Dubai Miracle Garden, United Arab Emirates 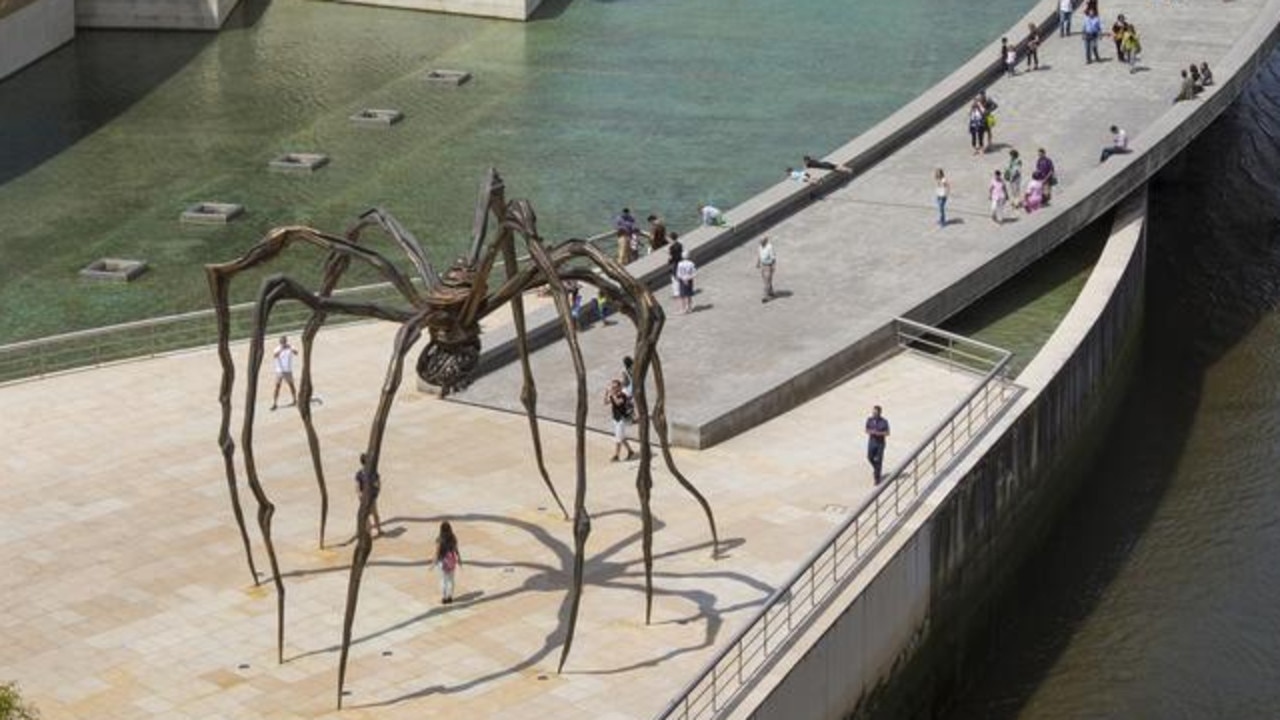 MAMAN, SPAIN
Arachnophobes*, look away. Outside the Guggenheim Museum in Bilbao, Spain stands a giant bronze spider sculpture by the artist Louise Bourgeois. Towering at over 9m in height, Maman provokes both fear and awe, with its massive height and slender legs.
LOCATION: Bilbao, Spain LES JARDINS D’ETRETAT, FRANCE
French actor Madame Thébault created this garden in 1903, having been inspired by artist Claude Monet. Perched on the top of a cliff along the Alabaster coast, the eccentric garden consists of seven distinct sections, including the Emotions Garden which features nine expressive faces.
LOCATION: Avenue Damilaville, Étretat, France Planet, Gardens by the Bay, Singapore.

PLANET, SINGAPORE
Within the beautiful grounds of Singapore’s Gardens by the Bay is a giant white sculpture of a baby that appears to be floating above ground. The sleeping child happens to be modelled after sculptor Marc Quinn’s own son.
LOCATION: Gardens by the Bay, Singapore 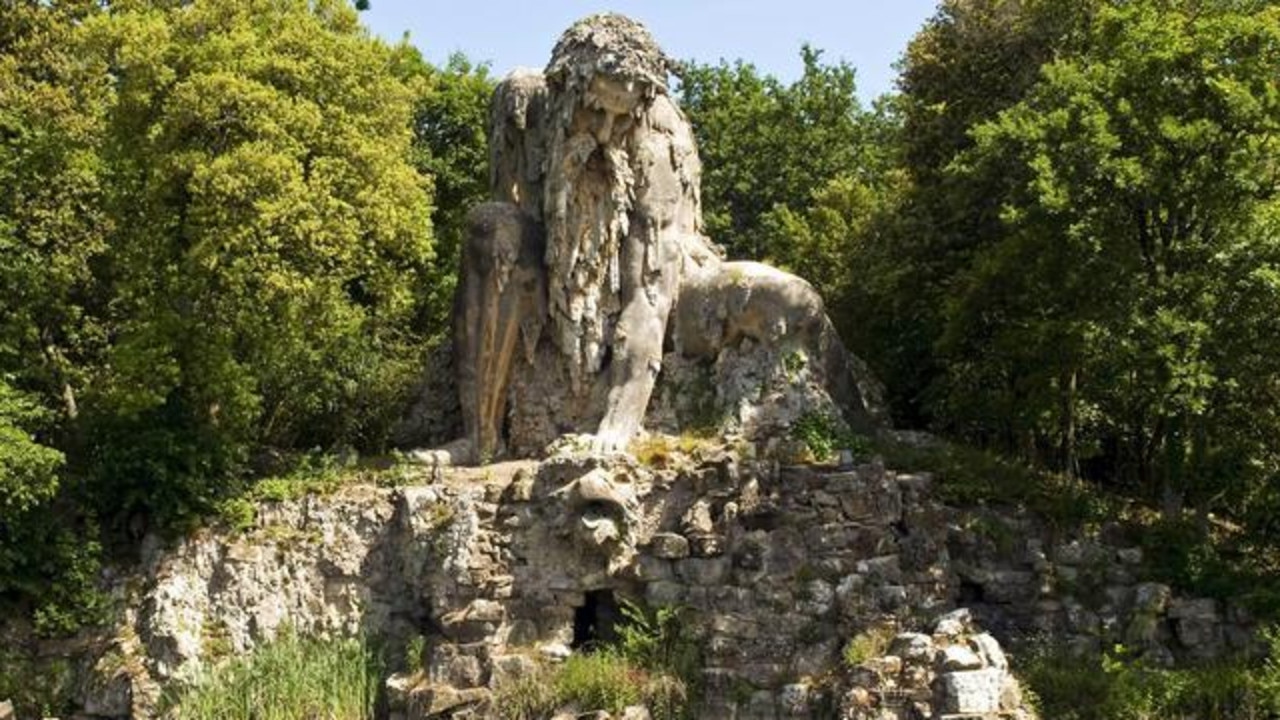 THE COLOSSUS OF VILLA DEMIDOFF, ITALY
Commissioned by Francesco I de’ Medici in the 1500s, the mysterious Villa Demidoff took nearly 12 years to complete. Among the natural caves, lakes and sculptures is the Appennine Colossus, who sits on a grotto contemplating his fate. The villa was abandoned in the early 1800s, and slowly the grounds became consumed by nature before falling into the hands of the government of Florence.
LOCATION: Parco Mediceo di Pratolino, Italy Angel of the North, England.

ANGEL OF THE NORTH, ENGLAND
Antony Gormley’s contemporary angel first spread its wings in 1998 and has been wowing travellers in Gateshead ever since – but it hasn’t always been that way. At first, the sculpture caused uproar with locals unimpressed by the design. Thankfully, residents soon fell in love with the angel.
LOCATION: Durham Rd, Low Eighton, Gateshead, UK

Incredible nature photos are a call to action

Mystery of the pyramids uncovered at last

CLASSROOM ACTIVITIES
1. Description
Choose one of the sculptures featured in this story and write an amazing description of it. Your description should be as detailed and interesting as possible.

Challenge yourself to include an example of each of these 3 types of figurative language:

2. Extension
This news article asks us to imagine setting out to see all there is to see on Earth. Now we want you to narrow it down to your top 10. Make your own personal list of the top 10 things you would like to do or see anywhere in the world. Write a sentence about why each one appeals to you.

HAVE YOUR SAY: Which sculpture do you like best? Why?
No one-word answers. Use full sentences to explain your thinking. No comments will be published until approved by editors.