A graffiti artist from Portugal is becoming a social-media sensation with his ultra-realistic murals that transform the mundane* into the magnificent.

Street artist Sergio Odeith’s mind-blowing 3D creations have earned him the nickname “The Illusionist” for their incredible colour, depth and imagination.

The 44-year-old self-taught artist – known as Odeith – has amassed* almost 780,000 social media fans after sharing his jaw-dropping works on Instagram.

From living creatures to vehicles, there is seemingly no subject that Odeith can’t turn into a head-turning piece of street art.

Showcasing his skill on a couple of abandoned concrete boxes, Odeith transforms the drab structures into an old-fashioned flatbed truck, while another artwork converts a decrepit* apartment block wall into a wrecked bus.

Odeith also magically turns a section of peeling, moss-covered concrete at the side of a building into a gleaming classic black Rolls-Royce.

The artist’s amazing creations show his humorous take on life, as he appears in photos with some of his 3D pieces.

In one photograph, a friend grapples with what appears to be a snarling leashed hyena as Odeith spray paints finishing touches onto its menacing jaws.

In another lifelike piece, Odeith appears to be chatting to a giant rooster as he stands on a chair animatedly engaged in conversation with the bird. It’s a more laid-back approach for Odeith in an amazing frog graffiti piece as he relaxes in a chair while the super-sized blue tree frog gazes inquisitively down at him from an old wall.

He lets fans in on one of his artistic tricks in a video showing just how the frog illusion looks as if it is literally about to jump off the wall. He explains the painting is “super distorted”. A super-sized blue tree frog gazes inquisitively down at the artist from the wall. Picture: Odeith/Instagram

After beginning using his spray can in the 1980s, Odeith now works on commissions around the world, with one of his 3D frogs recreated at Heathrow Airport in the UK earlier this year. Odeith magically turns a section of peeling, moss-covered concrete at the side of a building into a gleaming classic black Rolls-Royce. Picture: Odeith/Instagram 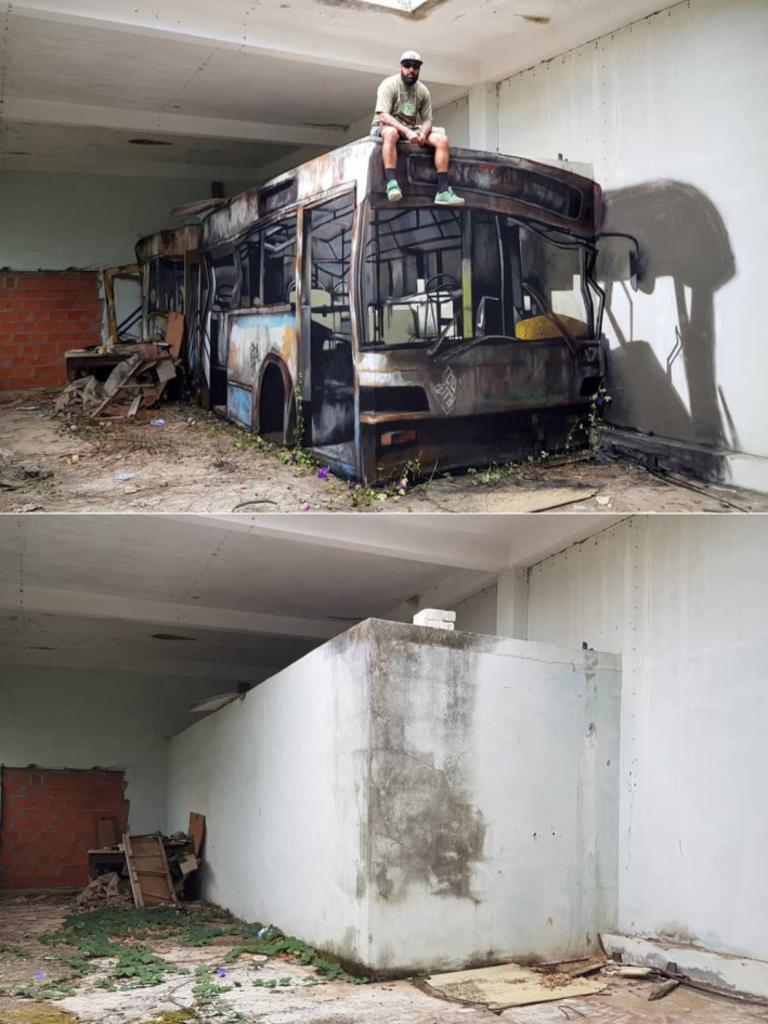 The side of a building is transformed. Picture: Odeith/Instagram

CLASSROOM ACTIVITIES
1. Looking at art elements
There are seven elements of visual art: colour, form, line, shape, space, texture, and value. Choose your favourite of Odeith’s artworks, explain why you like it best, and comment about his use of any 3 of the elements in that artwork.

2. Extension
Identify an area of your school that you think could do with some beautifying. On a piece of paper, create a design for an “Odeith-style” artwork that you believe would suit the space.

HAVE YOUR SAY: Which is your favourite mural?
No one-word answers. Use full sentences to explain your thinking. No comments will be published until approved by editors.