Australia’s oldest painting has been identified as a kangaroo-like image created more than 17,000 years ago on a sloping rock shelter in the Kimberley region of Western Australia.

The firm dating is a breakthrough after decades of attempting to assign scientific dates to rock art paintings in hundreds of caves and rock overhangs across the region.

In a research paper, published on Tuesday in Nature Human Behaviour, University of Melbourne chief investigator Damien Finch and colleague Sven Ouzman, from the University of Western Australia, say the accurate dating is a step towards creating a detailed timeline for art activity across Northern Australia.

Naturalistic* depictions* of marsupial species, snakes and other reptiles have long been considered among the most ancient of Aboriginal art styles.

Yet until now, none had been quantitatively* dated because most sites contain paintings so old that the organic material in the paint pigment, which is essential for radiocarbon dating, has gone.

Instead, a team from Australia’s largest rock dating project has extracted dozens of scrapes of ancient mud wasp nests, which can be radiocarbon dated, that lay above and beneath paintings in Balanggarra country, in the northern part of Drysdale River National Park.

By dating the wasp nests, the researchers were able to identify 27 radiocarbon dates from wasp nests around 16 images, concluding that paintings in the naturalistic style were produced between 17,000 and 13,000 years ago.

The 2m painting of the kangaroo figure has been identified as between 17,500–17,100 years old, making it the oldest painted figure in Australia.

“We always knew these naturalistic paintings were very old,” Dr Finch said. “But without dates, we couldn’t link them to what the climate and sea levels were like when these paintings were made.”

He said the inspiration of the artist to paint animals more than 600 generations ago was unknown, but the ability to locate them in time had revealed “something of the world these ancient artists lived in”.

“We do know that the naturalistic period extended back into the Last Ice Age, so the environment was cooler and drier than today,” he said.

The paintings are found in remote and pristine* landscapes between Kalumburu and Wyndham, featuring rocky escarpments* and the dramatic King George Falls visited by luxury cruise boats. The kangaroo is painted on the sloping ceiling of a rock shelter on the Unghango clan estate near the Drysdale River.

Dr Ouzman said the kangaroo image “is visually similar to rock paintings from islands in Southeast Asia dated to more than 40,000 years ago, suggesting a cultural link, and hinting at still older rock art in Australia”.

“Rock art is still being made so it’s a long, long tradition and we’re just doing the translation,” he said. “The dates allow us to link to paleoenvironments*, to the 11 excavations we’ve done in the area and to oral histories.” 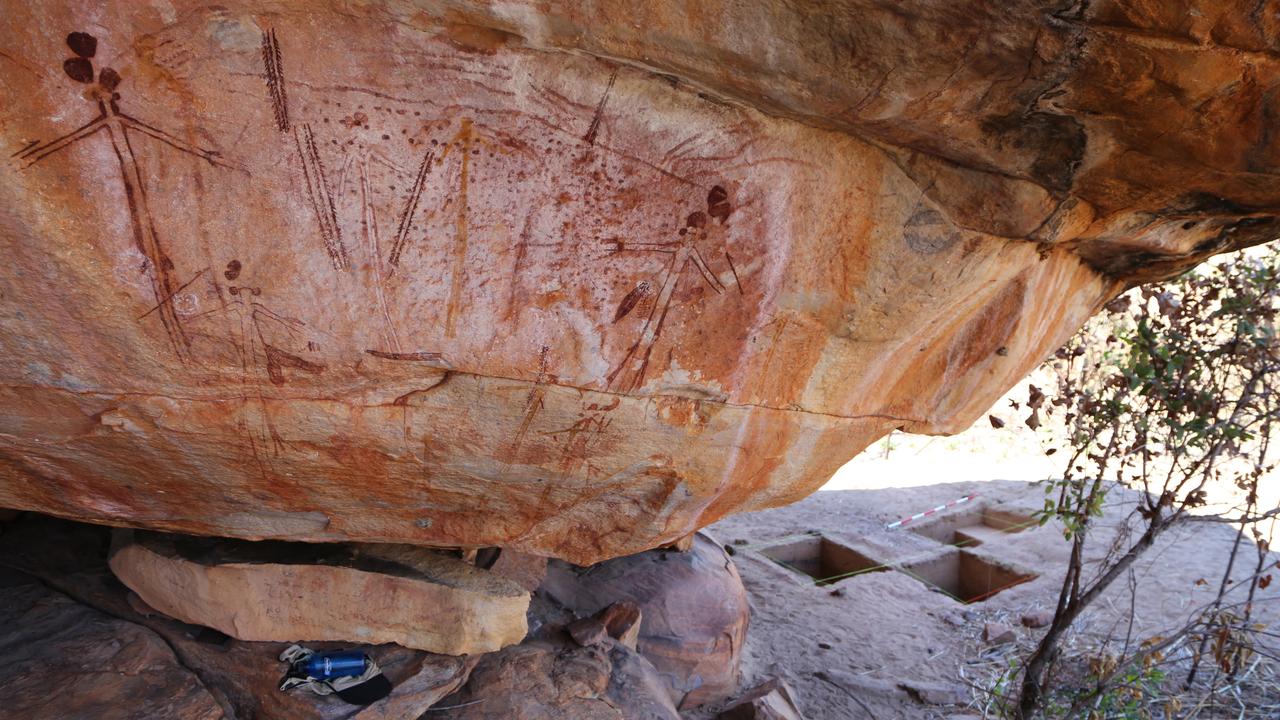 CLASSROOM ACTIVITIES
1. Create Your Own Rock Art
As a class go outside into the schoolyard and search for some flat rocks good for painting on. Give them a wash and dry. Aboriginal people use different colour clays and add water to make paint. You could use crayons or pastels.

Create your own rock art drawing on a rock. Try and link it to an Aboriginal ritual, painting or animals.

Display your rock art around the classroom.

2. Extension
What could a detailed timeline of art activity tell us about ancient people and times?

What could be the cultural links to Southeast Asia be with their 40,000 year old paintings?

HAVE YOUR SAY: Would artwork would you most like to see?
No one-word answers. Use full sentences to explain your thinking. No comments will be published until approved by editors.