Zoe Neal's ‘Travelling During the Pandemic’ cartoon was judged the best in the Year 7-8 group.

The absurd side of pandemic life and a rugby obsessed penguin have inspired the winning entries in the inaugural Kids News Cartoon Contest.

Mia, from the Sydney suburb of Epping, was the unanimous winner in the Year 3-4 group with her cartoon about an adelie penguin that made headlines when it swam 3000km from Antarctica to New Zealand. Year 3-4 group winner Mia Lai drew her cartoon about a penguin that swam 3000km from Antarctica to New Zealand – just to see a rugby match!

“I thought it would be funny to think of all the things he could be doing in New Zealand,” said the Barker College Year 4 student who wants to be a book illustrator when she grows up.

“I thought it would be funny to think of all the things he could be doing in New Zealand,” the Barker College Year 4 student said.

“I was going to make him go there for fish and chips but I thought it would be funnier if he was at the football because the All Blacks are very popular.

“I Googled and found out there was a match with France about the time when he was there.” Mia Lai, 10, wants to be a book illustrator when she grows up.

Sridhana, from the Ipswich suburb of Springfield in Queensland, used fire as a metaphor to describe the spread of Covid-19 to take the honours in the Year 5-6 group.

“My cartoon is about how the anti-vax people act towards the vaccine when they are in danger,” Sridhana said. “Covid spreads quickly, as does fire.” Sridhana Govindan’s about anti-vaxxers during the Covid-19 pandemic won the Year 5-6 group in the Kids News Cartoon Contest.

Year 7-8 category winner Zoe, from the Melbourne suburb of Diamond Creek, also zeroed in on Covid with her cartoon titled Travelling During the Pandemic.

Zoe said her cartoon pointed out that while people were unable to do much travelling during the pandemic, the virus and its variants were happily making their way around the world.

Zoe, who loves to draw and hopes for a career in animation, was she was “very surprised and very happy” to be a winner in the inaugural Kids News Cartoon Contest. Zoe Neal, 13, loves to draw and hopes for a career in animation.

News Corp Australia’s big-name cartoonists – Mark Knight from Victoria’s Herald Sun, Warren Brown from The Daily Telegraph in NSW, Brett Lethbridge from The Courier-Mail in Queensland and Peter Broelman from South Australia’s The Advertiser – picked the winners from more than 200 entries.

The winners will receive a caricature of themselves drawn by one of the expert cartoonists.

As well as choosing the winners, the cartoonists recognised a runner up and third place in each category.

First: Mia Lai, Barker College, NSW
From the judges: I liked the way Mia combined two issues; the long distance swim by the penguin and the rugby match in New Zealand into the one cartoon. Her characters are well drawn, the cartoon is illustrative and the penguin especially funny as it barracks at the rugby game. I was also impressed that Mia drew the cartoon using Procreate, a digital drawing program.

Second: Sadie Leigh-Young, Darlington Public School, NSW
From the judges: A powerful piece of political cartoon commentary by Sadie on the similarity between the major political parties, and a hilarious punchline to boot! Drawn in a wonderfully simple style that doesn’t get in the way of the idea! Sophie Monaghan came third in the Year 3-4 group for her cheeky cartoon on who is to blame for climate change. The judges loved the colour and the powerful message in 11-year-old Sridhana Govindan’s cartoon. Third: Madison Riquieme, Plenty Parklands Primary School, Victoria
From the judges:Madison created a series of excellent, standout cartoons of local and international political figures all of whom are depicted in hilarious – and accurate – caricature form. From Gladys Berejiklian to Donald Trump, Madison clearly has an interest in news events and a marvellous sense of humour to go with it! 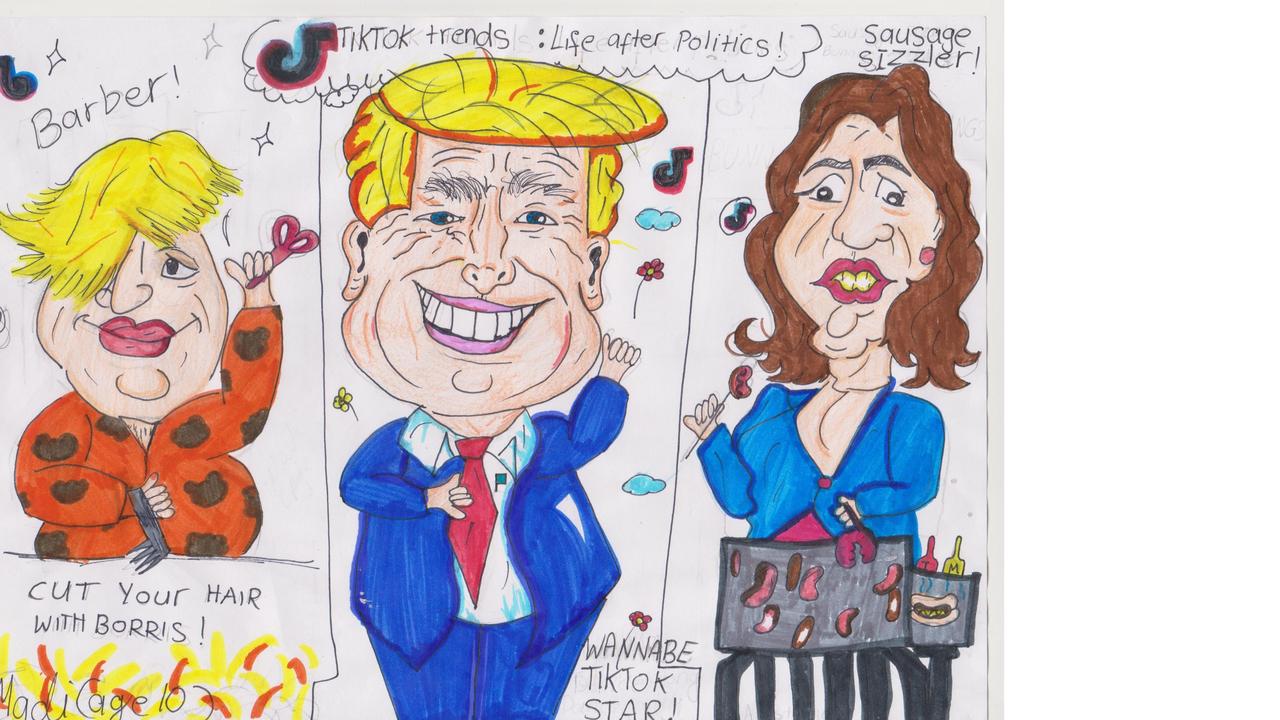 This is the first in Madison Riquieme’s series of three cartoons about possible life after politics for some of our world and local leaders.

First: Zoe Neal, Catholic Ladies’ College, Victoria
From the judges: Beautifully drawn, exceptional characters such as the flight attendant – and of course the Covid family. Great composition made it pleasing to the eye and there’s a lovely use of shadows. The airline name adds extra humour. A serious subject rated with marvellous humour.

Second: Jack Garoni, Saint Mary’s Sale, Victoria
From the judges: This cartoon makes you laugh. Jack takes the experience of the global upheaval that has been Covid over the last two years and asks us what have we actually learned? The letters of the Greek alphabet: alpha, beta, gamma and of course delta. I also like how the person in the cartoon is unseen. Their anonymity suggests the person in the chair represents all of us. Comic genius! Third: Nikos Stratikopoulos, Endeavour Sports High School, NSW
From the judges: Nikos’ cartoon puts the reader in a position where they feel like they are in there helping hold the hose of the brave country firefighter. Intense colours and great perspective create tension. The addition of the native animals in the background reminds us that our fauna lose their homes in bush fires too. The judges applauded Nikos Stratikopoulos’ use of colour and perspective in his third placed cartoon in the Year 7-8 group.