A NSW Fire and Rescue crew member battles a blaze on the Pacific Highway near Taree. Picture: Jane Dempster.

The massive bushfires in New South Wales and Queensland were an early and terrifying start to the fire season on the east coast of Australia.

They were clearly a major topic for public debate* and an obvious subject for my daily cartoon.

There has been much discussion about the causes of these fires with arsonists and climate change — and the lack of action to tackle it — becoming a main concern.

In my cartoon though, I wanted to look at the people directly affected by these fires and how they might feel. Australians who live in rural communities or even on the fringes* of our major cities and the fire service volunteers who put everything on hold to go out and fight these blazes. 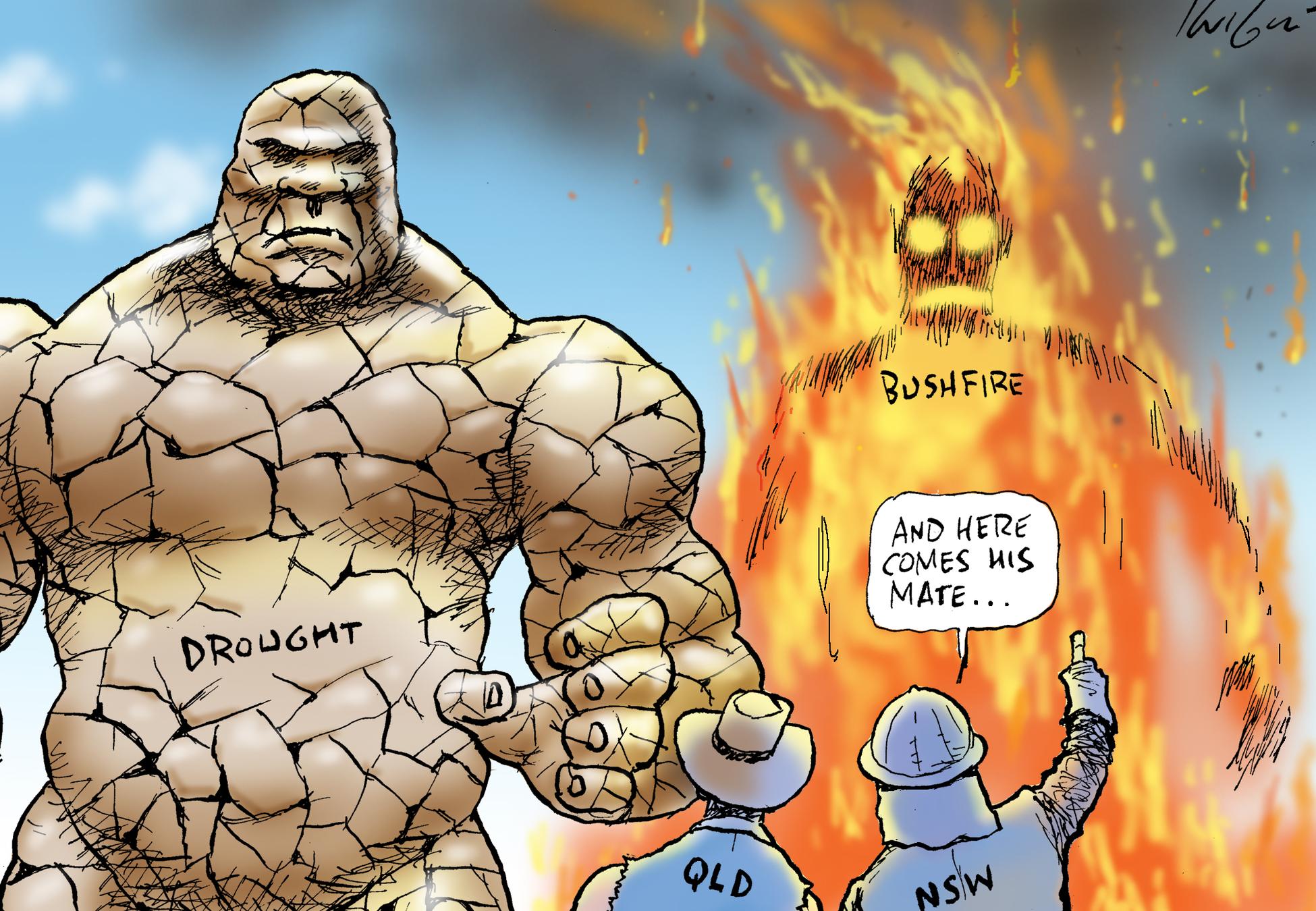 Mark Knight cartoon on the bushfires in Queensland and NSW

Mother Nature can be an awesome force and weather events like hurricanes, tornadoes, drought and bushfires see mankind* humbled* as we find ourselves at the mercy of these forces of nature. I wanted to illustrate the powerless position communities that live in the path of major fires find themselves in.

The extended drought* that has turned areas into a tinderbox* was a huge contributing factor. Drought is destructive in rural and urban fringe areas, but even worse, it invites bushfires in to cause and wreak* a final havoc.

I thought a good metaphor* for these two weather nasties would be to portray them as approaching giants and the local communities dwarfed by their level of destructive power. If you’ve ever stood before an approaching bushfire, the rising cloud of smoke and ash towers over you like godzilla* staring down, not to mention the intimidating* roar of the flames themselves. One of the great images of drought is the cracked mud of dried-up dams. I thought why don’t I create a giant made out of this cracked mud? I wanted something similar to the “Thing” character from Marvel’s Fantastic Four comics that I had read as a young boy!

As I started to draw this drought colossus*, he came alive when I drew his giant hand reaching out towards the reader seemingly to hold them in his grip.

The bushfire giant character would be mostly flame with embers* raining down. The one aspect of the drawing that made this character come alive was the expressionless burning yellow holes for eyes in its orange flamed head. Scary I thought!

To give scale to these weather giants, I placed in the foreground* a farmer and a firefighter, small by comparison, standing and looking up at what is coming towards them.

The drawing aims to show the enormity* of the task ahead for Australian communities in this time of severe weather events.

Mark Knight: An Aussie Cup win . I’ll drink to that

CLASSROOM ACTIVITIES
1. Natural disasters
Read Mark’s explanation about why he chose giants for his cartoon and write two, three or four short sentences, just to make sure you understand what the cartoon is saying.

Now consider two other natural disasters and draw your own cartoon depicting those natural forces as cartoons.

HAVE YOUR SAY: What actions do you think Australians should take to prevent more bushfires?
No one-word answers. Use full sentences to explain your thinking. No comments will show until approved by editors.