The mystery metal object is about twice as tall as an adult. Picture: Utah Department of Public Safety/AFP

Deep in the Mars-like landscape of Utah’s red-rock desert lies a mystery: A gleaming* metal thing embedded in rock in one of the most remote parts of the state.

The smooth, tall object was found during a helicopter survey counting bighorn sheep in southeastern Utah, US, officials said.

A crew from the Utah Department of Public Safety and Division of Wildlife Resources spotted the object from the air on November 18 and landed to check it out during a break from their work.

They found the three-sided stainless-steel object is about as tall as two adults. But they discovered no clues about who might have driven it into the ground among the red rocks or why.

Pilot Bret Hutchings of the state Department of Public Safety recalled someone on board spotting the metal object firmly implanted in a small clearing set against the redness of the rocks and sand below.

After he set their helicopter down in the remote area they got a closer look, but found “no obvious indication” of how it got there, the public safety department said.

“This thing is not from another world,” said Lieutenant Nick Street of the Utah Highway Patrol, part of the Department of Public Safety.

Still, it’s clear it took some planning and work to construct the 3-4m thing and embed it in the rock. 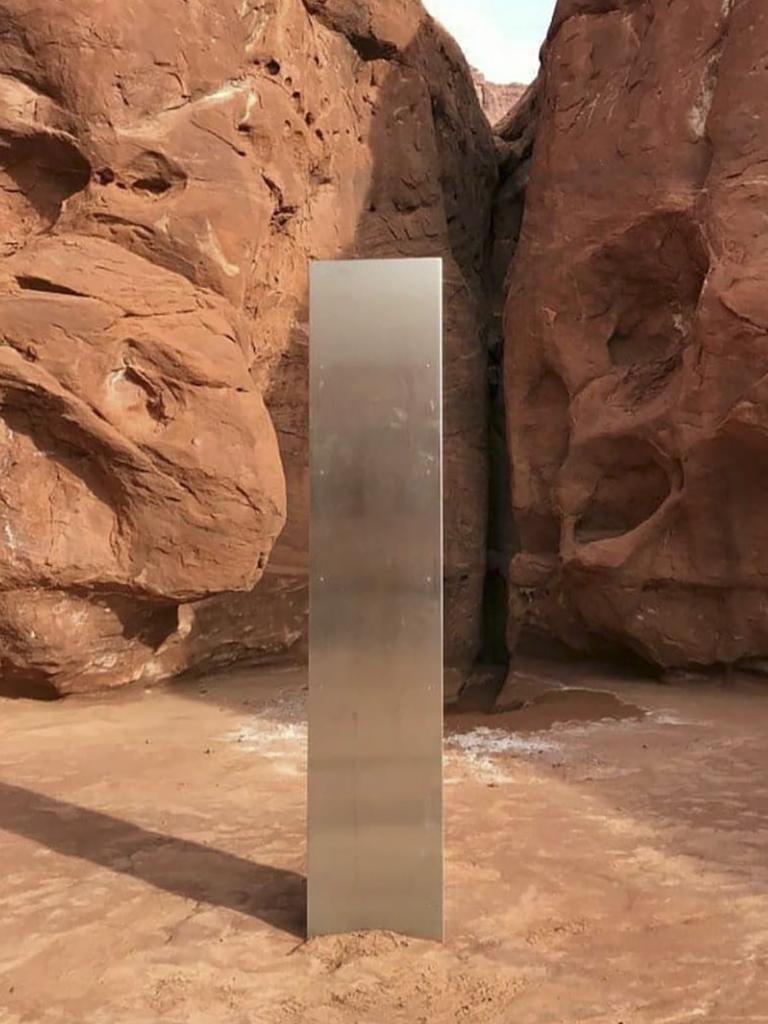 The metal thing is 3-4m tall and embedded in the rock in a remote desert region of Utah, US. Picture: AFP/Utah Department of Public Safety

The exact location is so remote that officials are not revealing it publicly, worried that people might get lost or stranded trying to find it and need to be rescued.

The thing reminds some people of an object that appears in the 1968 Stanley Kubrick movie 2001: A Space Odyssey.

“I’m assuming it is some new wave artist or something, or somebody who just is a big 2001: A Space Odyssey fan,” Mr Hutchings said.

In the film, an alien monolith* is a recurring* symbol that appears to play a key role in man’s evolution from the apes.

Many people jokingly commented on social media about aliens arriving to rescue us from the difficulties of 2020, including the coronavirus pandemic.

“Finally someone gets it!” said Twitter user Dwight Jackson of Calgary, Canada. “This is the 2020 reset we’ve been waiting for! Where is the mothership …?”

The US Bureau of Land Management is investigating how long it’s been there, who might have created it and whether to remove it and issued a reminder on Twitter that “using, occupying, or developing the public lands or their resources without a required authorization* is illegal, no matter what planet you are from.”.

15 amazing sculptures around the world

CLASSROOM ACTIVITIES
1. Solve the Mystery
What do you think is the answer to this mystery? Write a detailed story that explains what the shiny metal thing is and how and why it got there.

2. Extension
Imagine you are an alien from another planet who has heard about all of the things that have happened on earth in 2020. You have decided that you want to do something to help the humans on Earth. What would you do? Create an artwork, write a story or make a design showing what you would do

VCOP ACTIVITY
Continue the narrative …
Using the same story starter as the article, continue the text turning it into a narrative science fiction story.

Create your own characters, build on the setting, introduce a problem and then create a solution.

Use all your VCOP skills to create an engaging story from beginning until the end.

Read to a partner and compare how your stories differ, or are similar.

Deep in the Mars-like landscape of Utah’s red-rock desert lies a mystery: A gleaming metal thing embedded in rock in one of the most remote parts of the state.