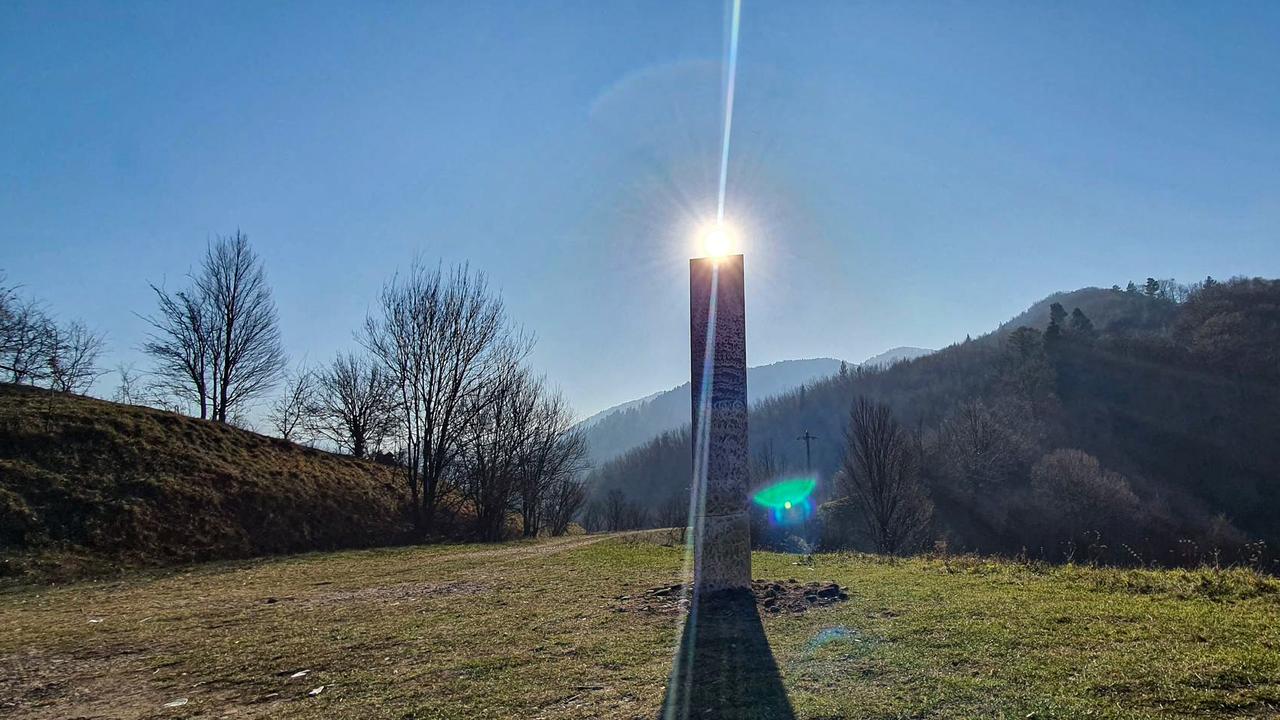 Another mysterious metal thing has been found, this time in Romania, days after one vanished without a trace from the desert in Utah, US.

The triangular metal pillar was found a few metres from an ancient landmark called the Petrodava Dacian Fortress in the city of Piatra Neamt in recent days.

It measures more than 4m tall and one side faces Mount Ceahlau — one of the seven natural wonders of Romania, known locally as the Holy Mountain.

The origin of the structure has Romanian officials as baffled* as their counterparts* in Utah.

“We have started looking into the strange appearance of the monolith*,” Neamt Culture and Heritage official Rocsana Josanu told the Daily Mail.

“It is on private property, but we still don’t know who the monolith’s owner is yet. It is in a protected area on an archaeological site. Before installing something there, they needed permission from our institution, one that must then be approved by the Ministry of Culture.” The discovery came as questions persist* about the origin and disappearance of a similar steel object in the remote desert of Utah last week.

You can read the Kids News story about the discovery HERE. A still image from video of the metal structure found in Utah, US, which has since disappeared. Picture: AFP/Utah Department of Public Safety

They did not reveal its exact location out of fear adventurous travellers would get lost in the remote area — but by Tuesday people had found it and visitors described a “circus” atmosphere full of YouTubers and confused government officials.

By Friday, the installation was gone, without anyone taking credit for the bizarre situation.

Google Earth imagery shows that the Utah structure appeared between August 2015 and October 2016.

This article was first published on the New York Post and was republished with permission.

Leaning Tower of Pisa not leaning so much anymore

CLASSROOM ACTIVITIES
1. Similarities and Differences
The appearance (and disappearance) of these monoliths or metal things has created a lot of curiosity. Although it is not the same object placed in each country there are similarities in their structure and where and how they appeared.

Read the article carefully and make notes of the similarities and differences of each object. Think about where they were placed, how long they had been there, who found them etc. Write your notes into a two-column chart labelled SIMILARITIES and DIFFERENCES.

2. Extension
This bizarre story is bound to be on the evening TV news. Write a news bulletin for the host of the evening news to read out to introduce this story. Try to highlight the strangeness of this situation. Use lots of interesting vocabulary to engage the viewers and create intrigue and curiosity about how and why they appeared.

You can also include an interview with someone connected to the story. They may even like to give their ‘opinion’ on the mystery of these structures.

HAVE YOUR SAY: Who do you think installed the metal things?
No one-word answers. Use full sentences to explain your thinking. No comments will be published until approved by editors.