How the World Celebrates Christmas: interesting stories behind our popular carols Young children sings carols in front of their Christmas tree.

When every store is filled with the sounds of jingling sleigh* bells and festive lyrics* about reindeers and snowmen, you know Christmas is just around the corner.

Christmas carols help get people into the Christmas spirit long before December 25 arrives, as do Christmas movies on our cinema screens and TVs.

Kids News has looked into the history of Christmas carols and how some of our favourites were created.

HISTORY OF CHRISTMAS CAROLS
The word carol means dance or a song of praise and joy. Thousands of years ago in Europe, carols were written and sung during all four seasons, but only the tradition of singing them at Christmas has really survived.

Originally Pagans (non-religious people or those that believe in more than one God) sang carols to celebrate the winter solstice* around December 22, but then early Christians took over the practice and began to sing Christian songs at this time of year. In 129 AD, a Roman Bishop decided that a song called Angel’s Hymn should be sung at a Christmas service in Rome. Another famous early Christmas hymn was written in 760 by Comas of Jerusalem, for the Greek Orthodox Church. Soon after, this many composers* all over Europe started to write Christmas carols.

The earliest carol about Mary and Jesus was written in 1410.

Carols were being collected and printed widely by the 19th century. And in 1880, it’s believed the Christmas carol service was invented in Truro by Edward White Benson, who later became the Archbishop of Canterbury.

Many of today’s most popular carols came from the 19th century (the 1800s) and have tuneful melodies, rich harmonies and lots of Christmassy sounds. 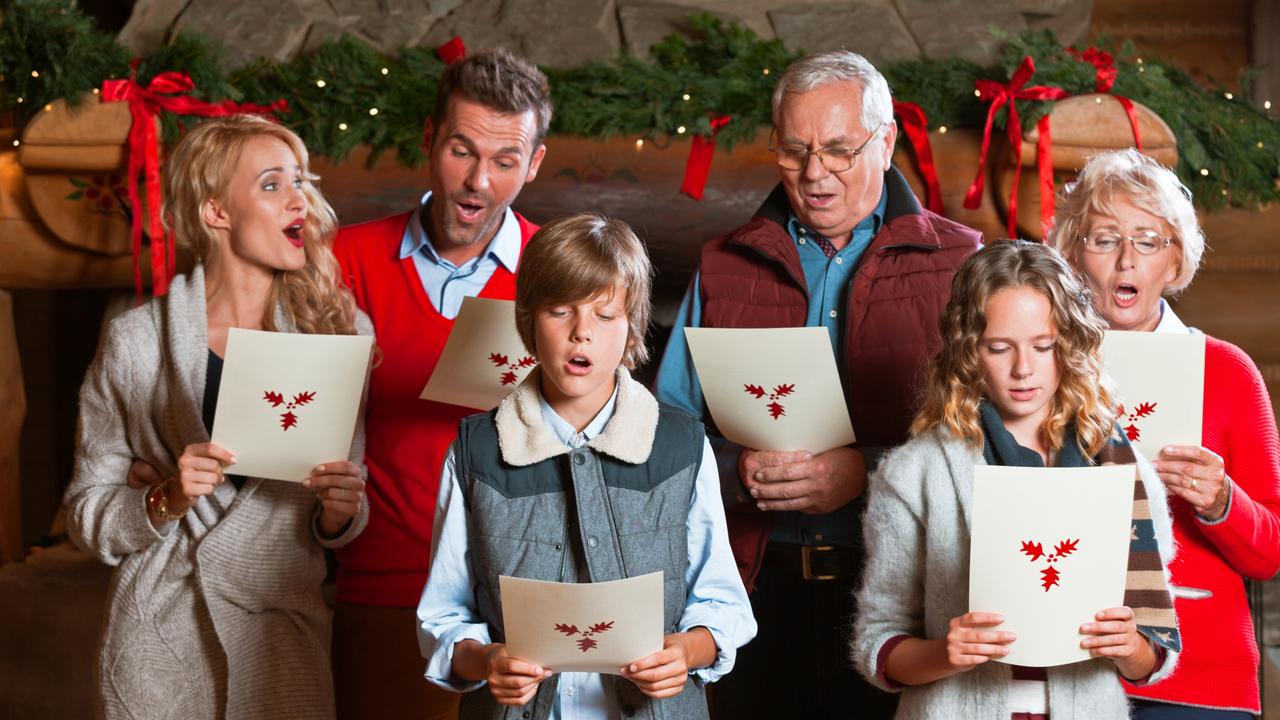 Multiple generations of one family sing carols in front of their fireplace.

What is carolling?
Carolling, which is when a group of people gathers to sing carols in public places, first happened in the 19th century (the 1800s).

People passing by would stand and listen and then thank the singers with drinks or mince pies.

In later years, carollers began moving from house to house in towns and cities singing songs and this became known as wassailing.

Carolling continues today in many countries with large community Christmas Carols held in parks, public squares, schools and even broadcast on TV.

MEANING OF SIX POPULAR CHRISTMAS CAROLS
Many Christmas carols are a sign of what was happening in the world at the time they were written and how the writer was feeling about the world.

Many old carols address issues such as religion, loneliness, grief and the need for hope in our lives. 1. White Christmas
It is believed this famous song was inspired by a case of homesickness.

Irving Berlin, a Russian, Jewish immigrant*, is believed to have written the song, which contains only 54 words and 67 notes, while working in Arizona in the US (or possibly New York) and missing his family.

White Christmas first aired on the radio shortly after the Japanese attack on Pearl Harbor during World War II, and, when performed overseas the following Christmas, it reminded homesick American soldiers of their families.

Singer Bing Crosby recorded a version of White Christmas in 1942 and it still holds the Guinness World Record for best-selling music single of all time with more than 100 million sales around the world.

From 1558 until 1829, Roman Catholics in England were banned from practising their faith openly so celebrating Christmas was not allowed.
Someone during that time created this carol and each verse has a code word for a religious element.
The true love in the first line “On the first day of Christmas, my true love gave to me …” refers to God and the “partridge in a pear tree” is code for Jesus dying on the wooden cross.

3. Winter Wonderland
The happy words in this song have a sad background

Richard Smith, who wrote the words, penned them while being treated for the illness tuberculosis*. Some believe the nostalgic* song was inspired by his memories of seeing children playing in the snow outside his hospital window. 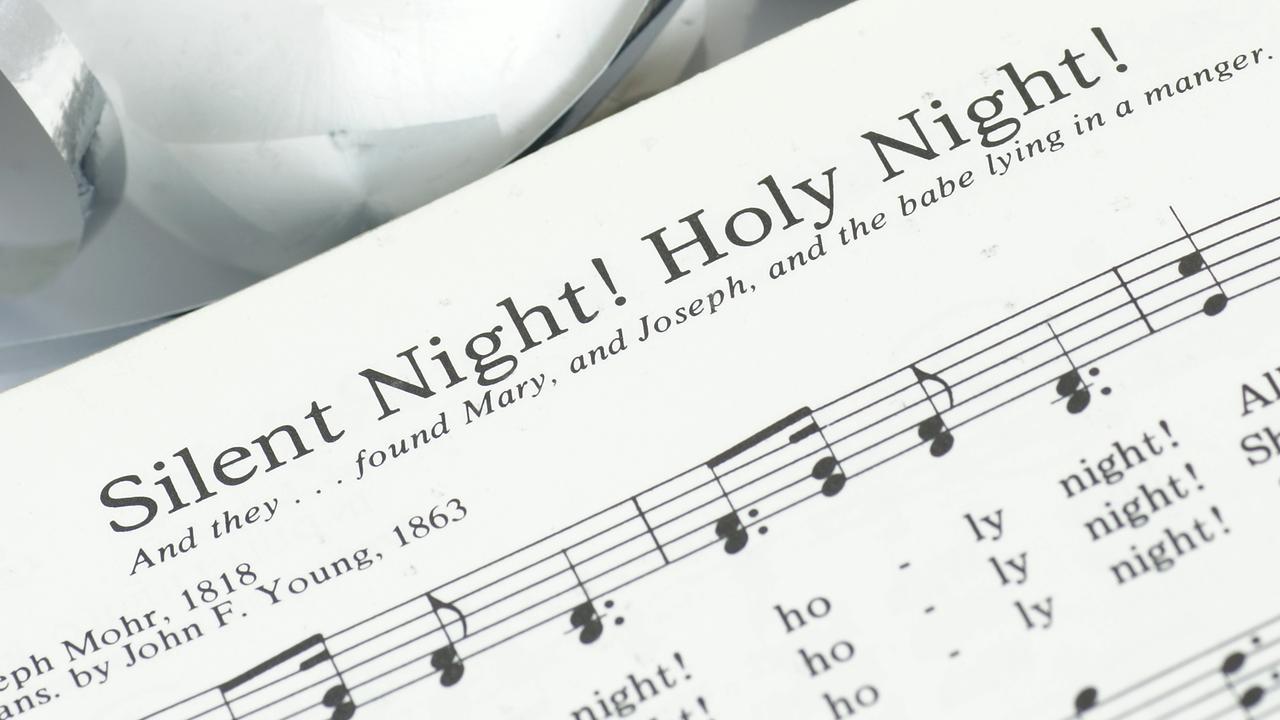 4. Silent Night
The music for Silent Night was written in 1818 by Franz Xaver Gruber to lyrics already written by Joseph Mohr in a small town in Austria.

It was said that Mohr’s congregation was poor and hungry after famine*, war and volcanic eruptions.

So he wrote the six poetic* verses to give people hope that there was still a God who cared.

Silent Night is the most recorded Christmas song in history, with more than 733 different versions copyrighted since 1978.

On more than one occasion during both World Wars, fighting at Christmas was temporarily* stopped by troops singing their native* versions of Silent Night to one another across the frontline*.

The version sung by Bing Crosby in 1935 is the fourth best-selling single of all-time. James Lord Pierpont (1822-1893), an American composer, songwriter and organist born in New England, wrote the melody and lyrics in 1857.

It was actually written for a Thanksgiving* church program in Savannah, Georgia in America’s south where Pierpont was an organist. The song was so well accepted that it was again sung on Christmas Day and since then it has become one of the most popular Christmas carols in the world. Santa with carollers at Carols by Candlelight in Melbourne. Picture: Tony Gough

6. Santa Claus is Coming To Town
The story behind this carol is not as happy as the tune. Songwriter James “Haven” Gillespie was broke*, jobless, and his brother had just died when he was asked to write a Christmas song. At the start, he was too overcome with grief, but eventually found inspiration in his brother’s life and the Christmas memories they had shared together.

Part 3: Festive foods and where the came from

Part 6: How to have a sustainable Christmas

HAVE YOUR SAY: Which Christmas carol do you like most?
No one-word answers. Use full sentences to explain your thinking. No comments will show until approved by editors.