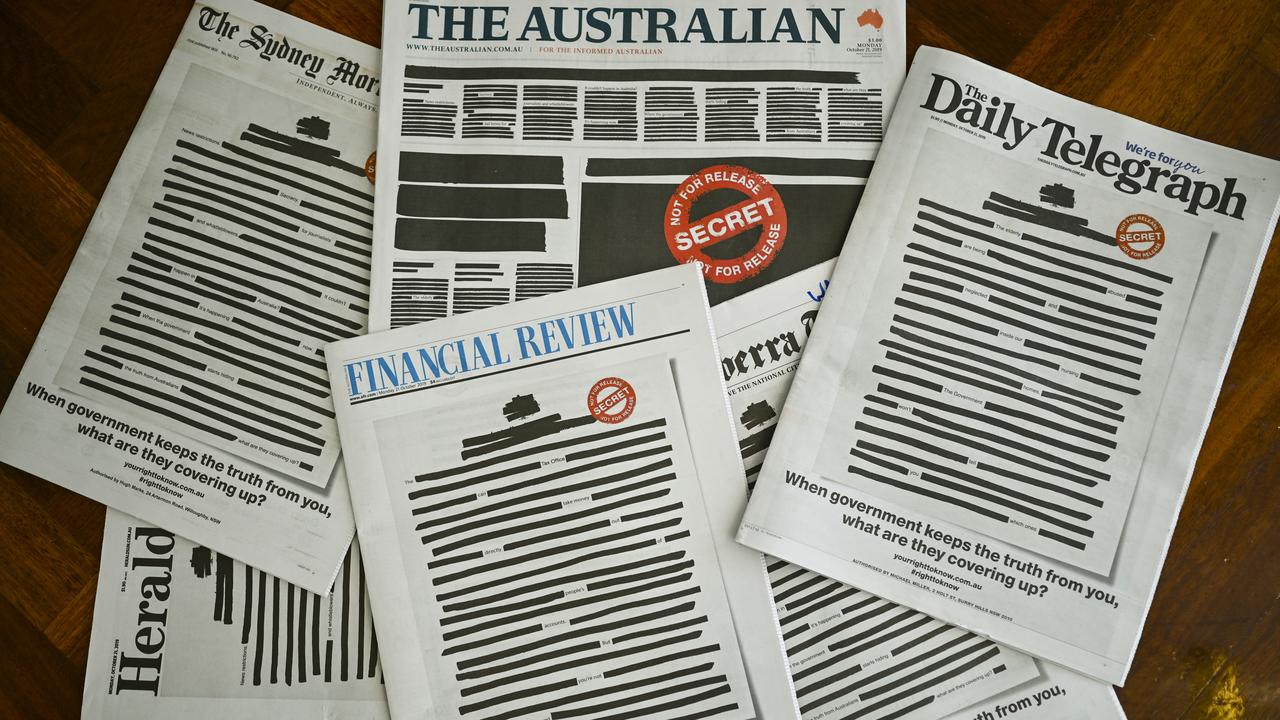 Australia’s major media organisations have taken the unprecedented* step of uniting to fight for press freedoms and the public’s right to know what’s going on in this country.

Australia’s Your Right To Know coalition* of more than a dozen of the nation’s top media companies and industry organisations is campaigning for change to six areas of law that it argues is allowing matters important to all Australians to be kept secret.

The coalition includes News Corp (which publishes many newspapers and Kids News), the ABC, SBS, The Guardian, Nine and the union that represents journalists, called the Media Entertainment and Arts Alliance.

On Monday, the entire front page of all major newspapers across the country carried an image representing a document marked Top Secret that had much of the content redacted, which means it has been covered with black marks so it couldn’t be read. These front pages also carried the text: “When government keeps the truth from you, what are they covering up?” 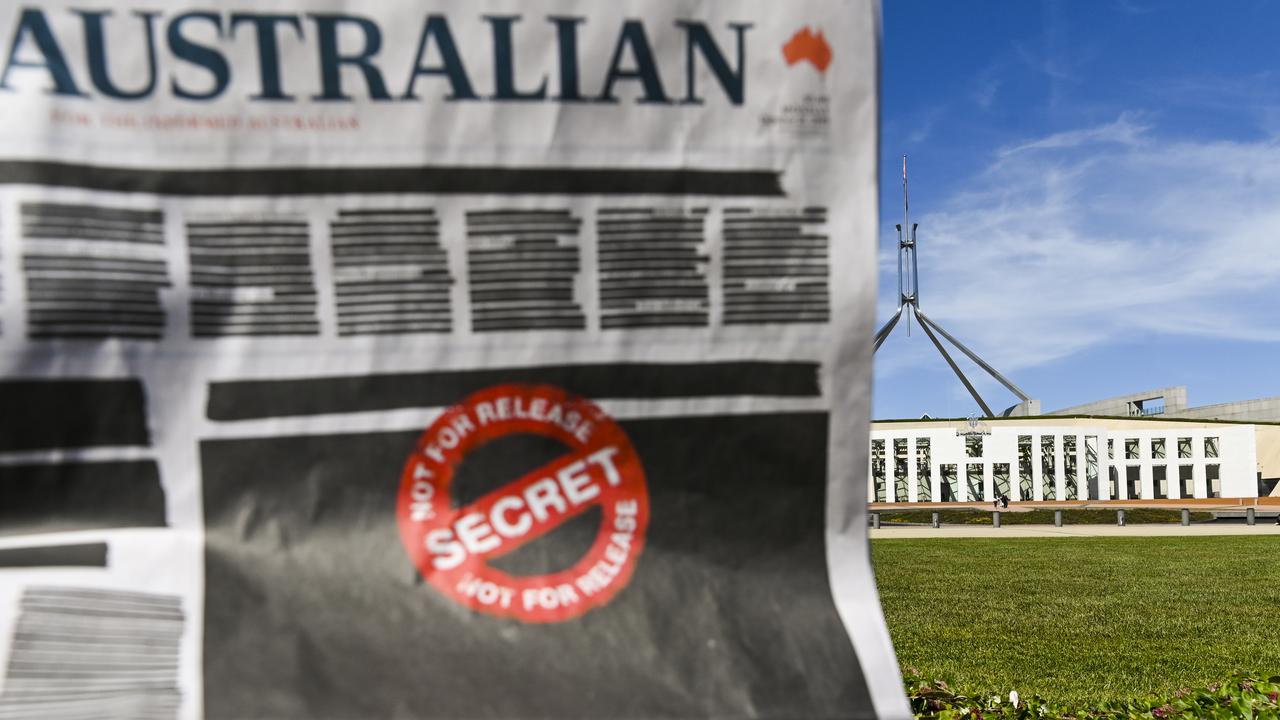 The front page of The Australian newspaper on Monday, October 21, 2019, shown with Parliament House, Canberra, ACT, in the background. Picture: AAP

In response to the Your Right to Know campaign, the Australian Federal Police on Monday announced it had ordered an internal review of how it handles press freedoms and whistleblowers.

Prime Minster Scott Morrison spoke about press freedoms on the eve of the joint-media campaign, saying “no one is above” the law.

Speaking from Indonesia, Mr Morrison said: “My government will also believe in freedom of the press.

“It’s an important part of our freedoms as a liberal democracy,” he said.

“And the rule of law has to be applied evenly and fairly in the protection of our broader freedoms.”

Leader of the Opposition Anthony Albanese said reporters should not be jailed for doing their job and laws that make journalism a crime must be changed. Mr Albanese said he supports granting media organisations the ability to contest* search warrants in court before they are issued. “Journalism is not a crime,” Mr Albanese said. “It’s an important and necessary component* of our democracy.” Since 2002, there have been 75 pieces of federal legislation* intended to protect the public from national security threats but that the coalition argues have found new ways of stopping the public’s right to know what the Federal Government is doing.

New independent research commissioned by the media companies reveals that 87 per cent of Australians value a free and transparent democracy where the public is kept informed, but only 37 per cent believe this is happening in Australia today.

The October survey of more than 1000 Australians by market research company Colmar Brunton showed 81 per cent were concerned about the thousands of complaints about aged-care homes that the government won’t share with the public.

Three-quarters (76 per cent) agreed that journalists should be protected from prosecution* when reporting in the public interest and 88 per cent backed whistleblowers who exposed wrongdoing.

For the media organisations that have formed the coalition, the straw that broke the camel’s back were the raids by Australian Federal Police on News Corp journalist Annika Smethurst’s home after she began investigating the publication of a leaked plan to allow the government to spy on Australians. Ms Smethurst now faces possible criminal charges, ironically because she reported the government was considering new powers to spy on all of us.

The other pivotal* incident was an unrelated raid on the ABC headquarters after a report detailing incidents of Australian special forces troops killing men and children in Afghanistan.

“It’s unprecedented to see the front page of every single newspaper pointing out the same issue we are challenged with having to deal with, but this is serious. It’s serious for all Australians, not just for media, but it’s our job to actually serve our communities,” News Corp Australasia executive chairman Michael Miller said.

“When you see every media organisation lining up together to make this point, we need to see some action.”

ABC managing director David Anderson said there had been a slow erosion* in the public’s right to know over the past two decades “with the introduction of laws that make it more difficult for people to speak up when they see wrong­doing and for journalists to report these stories”.

“This is much bigger than the media,” he said.

“It’s about defending the basic right of every Australian to be properly ­informed about the important ­decisions the government is making in their name.”

CAMPAIGN DEMANDS
The Your Right to Know campaign demands the government make changes in six key areas the coalition says are being used to limit press freedom and keep things secret from the Australian public. The coalition wants:

Dobbing on your mates could be a good thing

CLASSROOM ACTIVITIES
1. Your Right to Know
Write a list of reasons FOR and AGAINST everyday Australians being able to access more information under the Government’s Freedom of Information laws and the public’s right to know what governments doing.

Try and use some facts from the Kids News article in your for and against arguments.

2. Extension
In your own words, define what a ‘whistleblower’ is.

Do you believe people should have more protection from getting in trouble if they tell on someone for doing the wrong thing?

Give an example of a whistleblower in a school setting. Would they get into trouble?

HAVE YOUR SAY: Do you agree or disagree with any of the Your Right to Know campaign demands?
No one-word answers. Use full sentences to explain your thinking. No comments will be published until approved by editors.