PM resolute on keeping the drawbridge up As we slowly return to our new normal in this coronavirus-impacted world, we are seeing more and more things gradually come back. Our state borders haven’t been shut like the proverbial* farm gate for a while so we are starting to take holidays interstate.

Overseas travel is out though. Forget going to Bali or Phuket, we now go to the Gold Coast to get some sun. Which is great for the Aussie economy and local tourism operators who have done it tough over the last 12 months.

This week though the Prime Minister Scott Morrison ruled out reopening our borders to the outside world. He said it was just too risky with the COVID-19 pandemic still raging in parts of the world. Fortress Australia was the term being used and it conjured up images in my mind that I thought would make for an interesting cartoon.

Being an island continent Australia has a natural geographical defence against the importation of the virus. It only got here through infected travellers when they flew in. Eventually we will have to reopen and join the world. Our vaccination program is part of that preparation, but because that is taking longer than anticipated, the government believes the drawbridge should remain up!

All these lovely castle metaphors got me drawing. I started looking at images of medieval castles and soon my Fortress Australia started to emerge. High stone walls, battlements, a huge drawbridge firmly shut and of course it has to have a moat around it, symbolic of our island ‘girt* by sea’ as the national anthem declares. Staring out from the battlements is the Prime Minister, firmly standing by his decision to shut the borders.

The drawing needed something else to illustrate Australia’s stance*. I looked to history to see if there were any similar situations that I could use in a metaphorical* way to explain our decision to shut out the world for fear of letting in the scourge of the coronavirus. Then it came to me. The Trojan Horse!

In ancient times the siege of the walled city of Troy by the Greek army was a legendary story. Unable to breach* the wall, the Greek army retreated and as a parting gift to the city of Troy they left them a huge wooden horse sculpture. So thrilled with their prize the Trojans opened the city gates and wheeled the horse into the city. Unbeknown to them, however, was that the horse had Greek soldiers secreted* inside and that night they quietly slipped out, opened the gates to the city and it was goodnight Irene for Troy!

In other words, our government saw international air travel entering Australia a bit like the Trojan horse. The planes carrying infected passengers would help the virus breach our walled defences.

I drew the Trojan horse standing outside Fortress Australia. I captured it as we have seen in movies and history books, standing 30m high, constructed out of wood, with large wheels, but to give it context to Australia’s border closure I added aeroplane wings and a jet’s tail. It stands there in silence looking across the moat to the Prime Minister.

He doesn’t look like he’s about to open the front door!

Historical events and references can be helpful in understanding our current situations. We can learn from history! 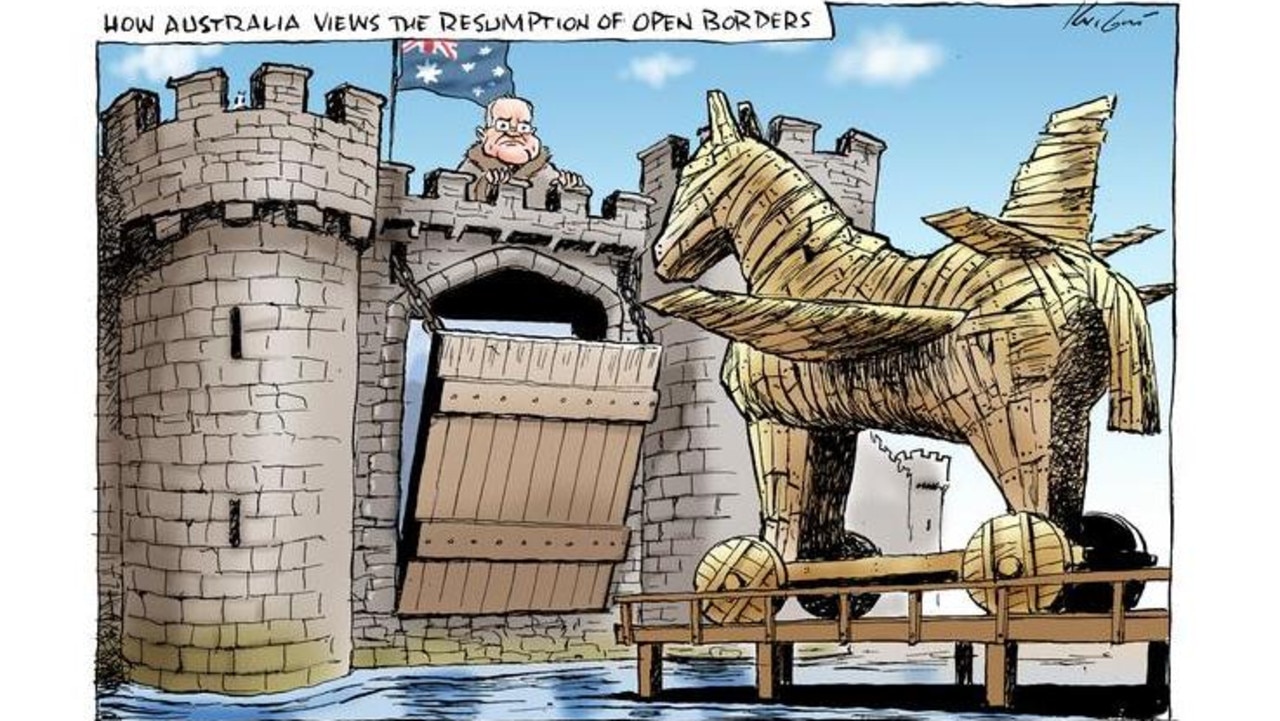 Quick decision by ScoMo not a surprise to cartoonist

Jane’s V a little sign of victory for science

Getting used to our strange new normal

CLASSROOM ACTIVITIES
1. What Happened Before?
Imagine this cartoon is part of a story that is made up of three cartoons. The three cartoons tell a complete story, and Mark’s cartoon is the end (or perhaps the middle) of the story. Think about what the story could be and draw the other two cartoons that tell the story.

Write a list of all of the other skills that you think cartoonists like Mark need to do their job. Next to each skill, write a sentence that explains why that skill is important or helps them to do a great job.