Global landmarks such as Sydney Opera House and London’s Buckingham Palace could one day be surrounded by water in high tides and extreme weather events – that’s if global sea level rise goes unchecked, according to new digital simulations*.

The streets of many major cities could get a soaking, while the rising tide could turn the Australian Centre for Contemporary Art building in Melbourne into a virtual island, if the projections* prove accurate.

With a bit of digital trickery, the global environmental group Climate Central has shown the effects of sea level rise in 200 coastal locations around the world, using topographical* information to show high tide water levels in warming scenarios* of up to 4 degrees. 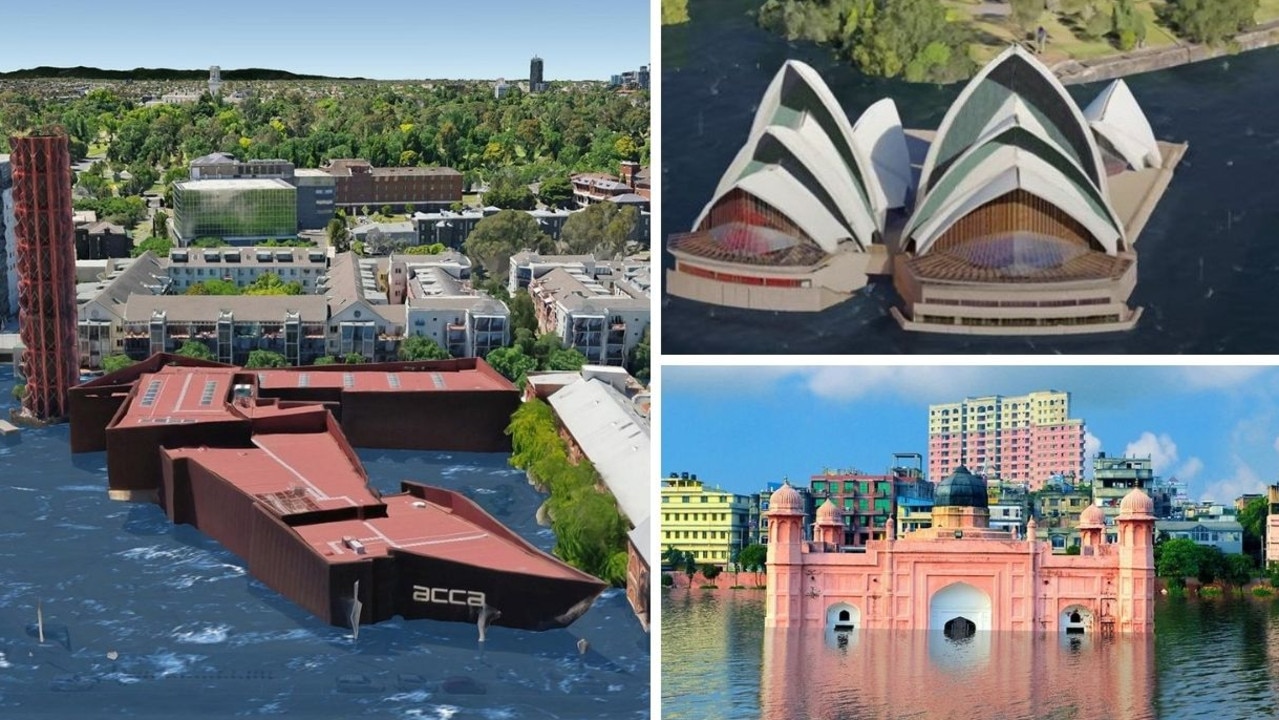 Climate Central has used digital technology and global landmarks, including the Australian Centre for Contemporary Art building in Melbourne (left), the Sydney Opera House (top right) and Lalbagh Fort in Bangladesh (bottom right), to illustrate the impact of rising sea levels due to global warming of 4C. Picture: Climate Central

An accompanying research paper published in Environmental Research Letters states global sea levels could be 73cm higher by the end of the century in a 4-degree warmer world. International efforts are focused on limiting global warming to a maximum of 2 degrees.

While the images of the Opera House and Buckingham Palace look like something out of a science fiction movie, Australian experts stressed that higher warming outcomes were not inevitable and the modelling did not take into account the common-sense drainage and engineering solutions that would be used to protect important structures from encroaching* water. Honorary Professor Andrew Short from the School of Geosciences* at Sydney University said such images were “misleading*”.

“The Opera House will never become an island because we’ll respond to it before it gets to that stage, and to become an island it would be a few metres (of sea level rise) which would take centuries at the present rise,” he said. “If we chose to do nothing, then in a few centuries it could become an island, but that’s a highly unlikely event”.

Professor Short co-authored a paper last year refuting* suggestions that half the world’s beaches would disappear as an effect of climate change, but he said sea levels were definitely rising, with evidence Australian tides were 25cm higher today than they were 100 years ago.

“(The records) do go up and down, but the trend is always up,” he said.

The sea level rise Australia had experienced to date was chiefly affecting tidal flats and mangrove areas, he said, but the areas most vulnerable* to higher waters in future would be cities built on river deltas such as Cairns and Mackay, areas of reclaimed* land in Melbourne and Sydney and canal estates. This digitally adjusted topographical map of Sydney shows Sydney Harbour after water rises at a 4C warmer level, with areas of water encroachment marked in red. Australian experts responded to the images to caution that such an outcome would likely require centuries of inaction. Picture: Climate Central

Fellow geoscientist Associate Professor Ana Vila Concejo said it was hard to predict when sea level rises might become a pressing problem for Australia, but human-made structures on the water’s edge could be especially exposed.

“They do not have the capacity* to react as natural systems do, so they’re very vulnerable,” she said.

As for water lapping at the Opera House forecourt, Associate Prof Concejo said such a scenario was “absolutely possible … however this might not end up happening because Sydney would try to engineer an icon* such as the Opera House to protect it.”

“But I don’t think that would happen with all areas,” she said. “There isn’t enough money to protect every shoreline. Our government will have to choose what to save, what to engineer, and some parts will have to go.”

Teen climate warriors have their day in court

CLASSROOM ACTIVITIES
1. Predict the future
In this news story, we read about what might happen in the future with regard to rising sea levels. What actually happens will be largely dependent on human behaviour. Weighing up what you know about climate change and actions that humans are taking to prevent it and mitigate its effects, what do you think will happen? Write a paragraph explaining what you think the future holds and why you predict this outcome.

2. Extension
Honorary Professor Andrew Short is quoted in this story. Can you identify one event that he says:

VCOP ACTIVITY
Let’s draw a cartoon about this story. Use cartoonist Mark Knight’s three-step process to get started: