It’s out with the old, in with the new as PM charges into electric vehicle era Mark Knight's cartoon compares and contrasts the Prime Minister's position on electric vehicles now and in the past.

Australians have been good “early adopters” of technology. We took up home computers with enthusiasm back in the 1980s, mobile phones and Wi-Fi have spread like wildfire and solar panels cover our roofs these days like beach towels on a hot summer’s day at Bondi Beach.

It will be the same with electric cars. Eventually they will become the norm. When technology improves and the prices start to come down, Aussies will take to electric cars like Kevins to Commodores.

Even blokes like Prime Minister Scott Morrison seem to be jumping on the EV* bandwagon*, after he performed an amazing U-turn last week by announcing his government will fund an increase in electric vehicle charging stations around the country. At the last federal election he opposed electric cars as being unfit for Australians who like to get out and travel around this wide brown land in their utes and SUVs*.

He said battery powered cars would “destroy the weekend”! He was probably right in that most of the EVs we have in Australia at the moment can’t tow your caravan across the Nullarbor or pull your boat across the beach at Mallacoota, but they are coming.

They are already in the US and it’s just a matter of time before they get here. And they will help us achieve our target of net zero carbon emissions by 2050. 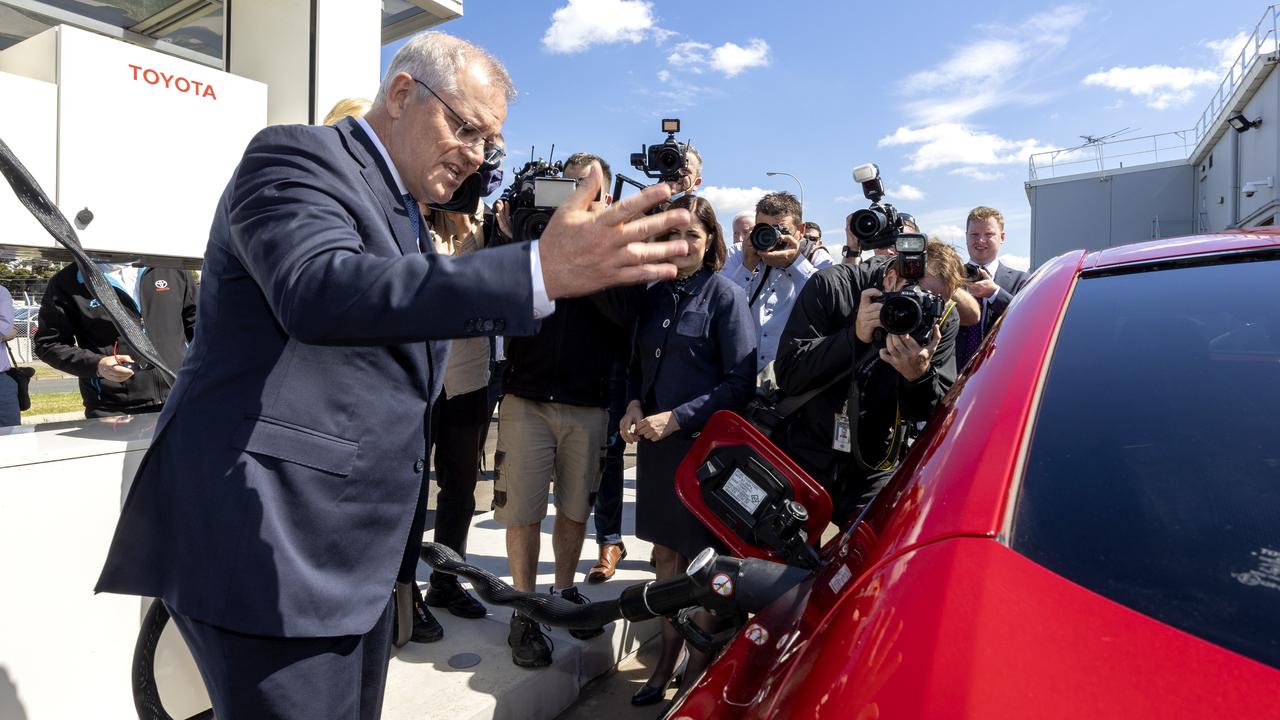 Prime Minister Scott Morrison charges up an electric car on his visit to the Toyota Hydrogen Centre. Picture: David Geraghty

This called for a cartoon to illustrate the PM’s change of mind. I thought the cartoon should be a comparison on where his mindset was three years ago and where it is now. That would be achieved by drawing what car he was in then and what he might be driving now after his conversion to EVs.

I’m amazed by the number of chunky looking SUV utes you see on the roads. These are more than just a tradie’s work vehicle on steroids*, people are spending serious money on tricking them up*: huge wheels and tyres, fancy bull bars, suspension upgrades and spotlights that would melt a deer crossing the road at 400m. And all this just to drive the family around the suburbs. The chunky looking ute in Mark Knight’s cartoon was inspired by cars like this.

If you place one of these testosterone* injected SUVs next to an inner-city purposed EV, the comparison is quite hilarious. So that’s what I did of course!

In the cartoon, ScoMo has driven his fire-breathing Godzilla series diesel ute up onto the footpath of the EV dealership which is offering trade-ins.

Such is the PM’s haste to do a deal on a new car, the driver’s door on the ute is left swung open. Before you can say “Fill ’er up” he is cheerfully motoring out of the dealership in his new little EV, past his old carbon-belching diesel SUV with a car salesman happily waving goodbye. It is the easiest deal he has ever done.

The cartoon is a clear “compare and contrast” between the old government policy and the new, with the policies symbolised by the two vehicles.

One wonders what the folk at the Deniliquin Ute Muster will make of it when ScoMo’s turns up in his new ride!

Greens want only electric cars by 2030