Beachgoers in Sydney have been shocked at the sight of millions of maggots washing up on the northern beaches.

The creepy crawlies were first spotted at Newport beach on Sunday when a woman named Jane Gardner posted photos on Facebook with the tagline: “Zillions* of maggots washed up on the tide at Newport Beach.”

The infestation* forced Northern Beaches Council to close Bilgola beach’s rock pool this week and yesterday the insects were seen at popular Dee Why beach — now it is a waiting game for the larvae* to turn into flies. 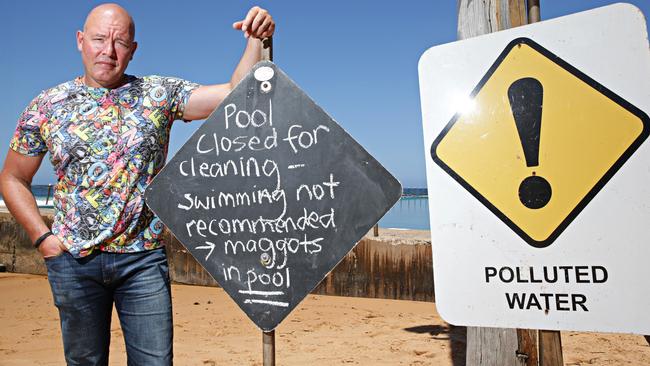 Bilgola resident Colin Weir was preparing to go for a swim at the rock pool when he was confronted by clusters* of the wriggling larvae.

“It was disgusting — this moving carpet of white maggots,” Mr Weir said.

“I’ve been going to this beach every year for 15 years and have never seen anything like this.

“It has been quite the talk of the beaches this morning. There were millions of them.” Maggots on the sand on a Sydney beach. Picture: Jane Gardner/facebook A close-up of some of the maggots in the pool. Picture: Manly Daily

And while the thought of swimming alongside one — let alone millions — of maggots is off-putting to anybody, the seagulls were happy.
“You look up the beach and there were about 200 seagulls feeding off them … it was quite extraordinary,” Mr Weir said.

Council’s manager of environment and infrastructure, Ben Taylor, said flies had laid eggs on big chunks of seaweed that had washed up on the shoreline of the two beaches.

“Natural beach conditions along with warm weather have contributed to an infestation in the seaweed caused by flies laying larvae,” he said.

“This is an unfortunate but natural occurrence and we have cleaning crews monitoring and managing the situation.”

Hazardous* surf conditions yesterday raised hopes the water may have washed away many of the maggots.

“Large swells overnight have removed the bulk of the seaweed across the northern beaches and the council will continue to monitor the situation,” a council spokeswoman said.

CLASSROOM ACTIVITIES
1. Read the story carefully.
Why have millions of maggots washed up on Newport and Bilgola beaches?

Write down all of the steps that have led to this.

2. Write a story
Use the following sentences to start a story. Don’t forget to plan your ideas first.

Extension: Think about the story that you have just written.

Retell the story from the point of view of: