Thwaites Glacier is said to be 'the most vulnerable place in Antarctica' and is melting from below because of warm water currents. Picture: AFP

Scientists have found the giant Thwaites Glacier in Antarctica is melting from the inside and believe they now know why.

Thwaites Glacier is nicknamed the Doomsday Glacier because of the deadly impact its melting could have on our planet.

If it collapsed completely it could raise sea levels by 60cm. It’s thought that a sea level rise of 60cm would swamp coastal towns and cities around the world.

Surveys carried out by British and US researchers show that warm water melting the glacier from below gets there via ocean channels.

“These channels had not been mapped before in this kind of detail,” Dr Kelly Hogan from the British Antarctic Survey (BAS) told BBC News.

“What we’ve discovered is that they’re actually much bigger than anyone thought – up to 600m deep. Think of six football (soccer) pitches back to back.”

She added: “Because they are so deep, and so wide – this allows a lot more water to get at, and melt, Thwaites’ floating front as well as its ice that rests on the seabed.” 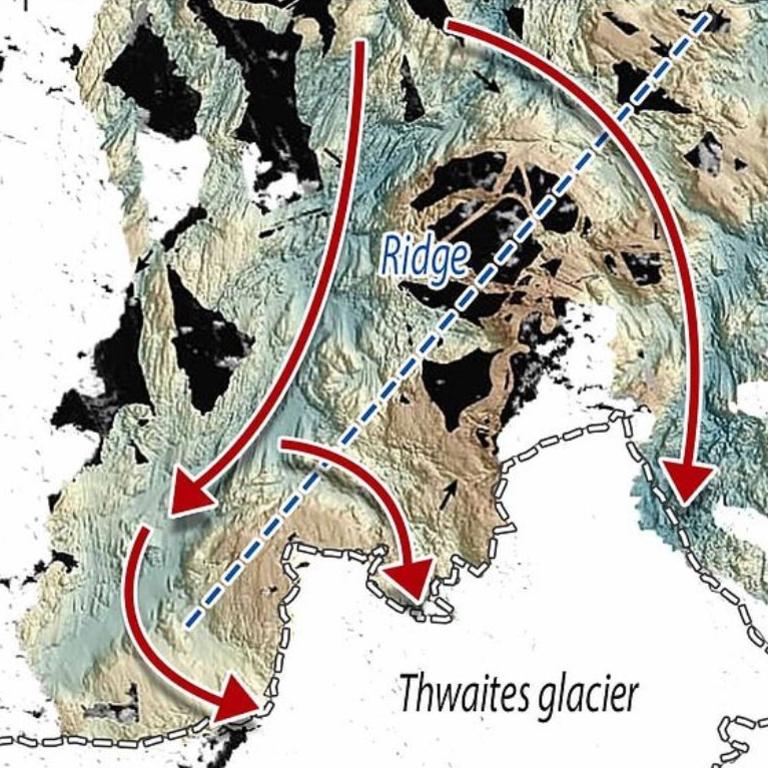 New maps reveal that channels carrying warm water along the Antarctic sea bed are the likely culprits for the gradual collapse of the Thwaites glacier. Picture: British Antarctic Survey

Thwaites, which flows into Antarctica’s Pine Island Bay, is already losing eight times as much ice a year as it was in the late 1990s.

It dumps 80 billion tonnes of ice into the ocean every year, heavily contributing to global sea level rises.

In addition, the Thwaites Glacier, the nearby Pine Island Glacier and several smaller glaciers are seen as a protective buffer for the much larger West Antarctic Ice Sheet. The two bigger glaciers are shielding ice that, if melted, would contribute to significant sea-level rise around the world.

Scientists think we could see a total collapse of the glacier within the next century and are scrambling to better understand how to save it.

As part of two new studies into the glacier, teams of US and UK scientists scanned Thwaites from above and below.

One group mapped the ice sheet from the air, while another used an icebreaker vessel equipped with an echo-locator*.

The two studies provide the best view yet of the underside of the glacier.

Their maps reveal a series of channels deep beneath the ice shelf that join up to form a major cavity.

Scientists think this cavity is a major cause of the ice loss seen at the glacier.

“The connected channels that we’ve mapped are the potential pathways for deep-ocean warm water to get in and do damage,” BAS’s Dr Tom Jordan said.

He added that the channels “also melt the base of the ice shelf, which if you weaken will make the ice further upstream in the glacier flow faster.” Scientists will use the new data to create models that can help them to better predict the glacier’s behaviour in future.

CLASSROOM ACTIVITIES
1. What Can We Do?
What do you think that could be done to stop or slow down the Thwaites Glacier melting? Brainstorm as many ideas as you can. Choose your best idea and write out a plan or create a design that could put this idea into action.

2. Extension
Create a diagram that will help another student understand how and why the glacier is melting.

HAVE YOUR SAY: How concerned are you about glaciers melting and climate change?
No one-word answers. Use full sentences to explain your thinking. No comments will be published until approved by editors.