Southern Lights turn on a night sky spectacular in Victoria 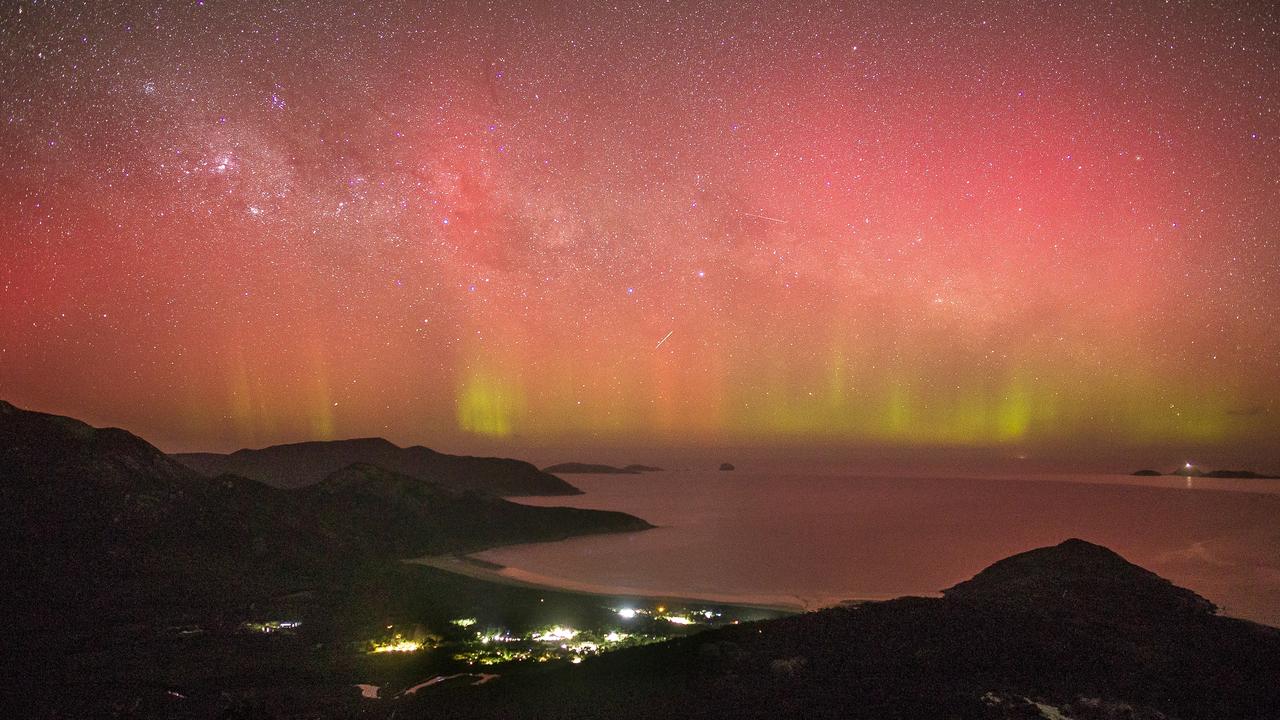 It was a light show of the Down Under kind when the Aurora Australis put on a rare and impressive display over Victoria.

Keen photographers captured the stunning display of colourful, dancing lights in the night sky in the early hours of November 1.

But the right camera lens was vital – the colours were not visible to the naked eye.

The spectacle was visible as far inland as northern Victoria but amateur* photographer Luke Rasmussen captured his photograph from atop Mount Bishop at Wilsons Promontory*, the southernmost point in Victoria.

He said it was one of the best spots to view the aurora*.

“If you can get up a hill and get a clear view towards the south, with no clouds or light pollution, that gives you a great chance,” he said.

“You could see the lights dancing in the sky, and with the camera you can see the colours too.”

“You get a chance every month or so in Victoria, (but) Tasmania gets the best show every few weeks because they are further south,” he said.

“The lights will get stronger as we head towards a solar maximum* – it’s about every 11 years and we’re only a couple away.” Aurora Australis as seen from the ground at the Mawson research station in Antarctica. Picture: Australian Antarctic Program/Chris Brown

WHAT IS THE AURORA AUSTRALIS?

Cosmic cousin to the northern hemisphere’s Aurora Borealis, the Aurora Australis happens when electrically charged solar particles* and atoms* in the Earth’s atmosphere collide with gases like oxygen and nitrogen, causing them to emit light.

The lights usually appear either red or green in colour. According to the Australian Antarctic Program, “at lower altitudes* (about 100–110 km up) green emissions* from atomic oxygen dominate, while at about 250 km up, red emissions from oxygen dominate.”

WHERE CAN WE SEE IT?

The planet’s two auroras occur in ovals around Earth’s two magnetic poles, which is why your chances of seeing Aurora Australis improve the closer you are to the South Pole.

Tasmania, New Zealand and of course Antarctica are all in “pole” position for sightings of the Aurora Australis. Located on the southeast coast of Australia, Victoria also offers a decent vantage* point when conditions are just right, as they were on Monday.

The same proximity* rule holds for the North Pole and the Borealis. The Northern Lights attract tourists and avid* sky gazers to far northern nations like Finland, Iceland and Norway. WHEN CAN WE SEE IT?

The Australian Antarctic Division of the Department of Agriculture, Water and the Environment put the odds of seeing the Aurora Australis in Tasmania on a clear night as only between 1 and 2 per cent. Most lightshows happen during the southern autumn and winter months spanning March to September.

The night must be as dark as possible, with little if any cloud cover and no artificial* lighting.

Australia’s best known icebreaker was named for the spectacular Southern Lights. Operating as part of the Australian Antarctic Division, the Aurora Australis transported researchers, scientists, supplies, equipment and even artists in residence to Antarctica for 30 years before her retirement last September. Pictured on the waterfront in Hobart, the Aurora Australis icebreaker was retired in September 2020 after 30 years of service in Antarctica. Picture: Richard Jupe

CLASSROOM ACTIVITIES
1. Top tips sheet
Create a “Tips for viewing the Aurora Australis” sheet. Include as dot points each of the important things a hopeful viewer should know to increase their chances of seeing the spectacle.

2. Extension
Draw a diagram that explains how the phenomenon of an aurora works.

VCOP ACTIVITY
The sky lights up
You have just been awarded an innovation award for your new invention. A pair of night glasses that allows the naked eye to see the Aurora Australis by creating an overexposed layer on the lens.

You need to market the glasses to a top sunglasses brand to try and get them to stock them in their store.

Your advertisement needs to be both visually appealing, as well as choosing convincing wording that encourages the audience to race out and buy these new glasses.

Design and present an advertisement that can go in the next issue of a top magazine or catalogue promoting your new product.

In your product description, include what the product does, why the customer needs it, why your product is better than others on the market, maybe who the target market it, and anything else that might convince them to race out and purchase. Use your VCOP skills and check over your work before you share with your audience.