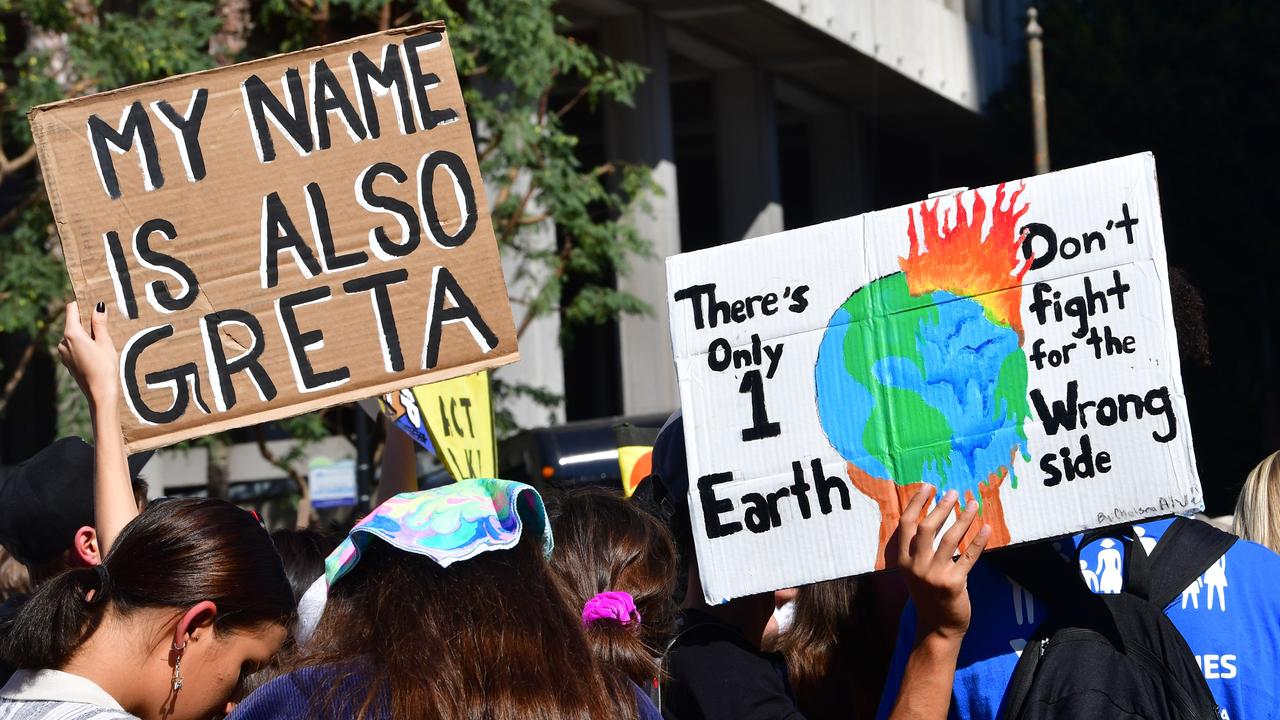 Activists hold placards before a march through downtown Los Angeles, US, during a climate change rally where teenage Swedish activist Greta Thunberg addressed the crowd on November 01, 2019. Picture: AFP

Eliminating subsidies to fossil fuel companies, restoring forests, eating more plants and wasting less food, having fewer children and abandoning an obsession with economic growth are among the recommendations from a new report cosigned by thousands of scientists warning of a climate emergency.

11,263 scientists from 153 countries have joined together to endorse* the declaration of a climate emergency, offering six clear measures they believe could avoid “untold* human suffering” as a result of climate change.

The group said the declaration is based on the scientific analysis of more than 40 years of publicly available data on energy use, surface temperature, population growth, land clearing, deforestation, polar ice mass, fertility rates, GDP* and carbon emissions from around the world. 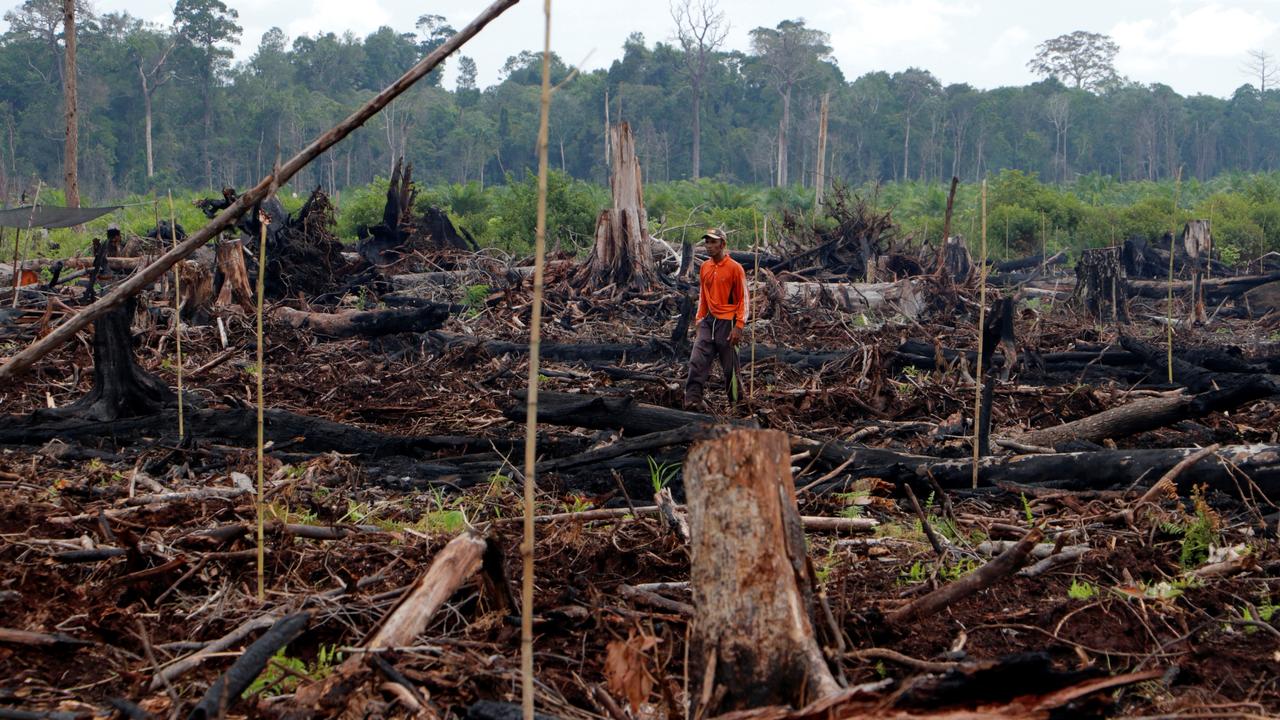 It provides what the coalition calls “six clear measures” where immediate steps must be made to slow down the pace of climate change, relating to energy, pollution, land use, food, the global economy, and population.

ENCOURAGING SIGNS
While they said the planet is facing a climate emergency, they concede* getting governments to act is going to be tricky, and will involve “transforming the ways we govern, manage, eat, and fulfil material and energy requirements”, but there have been some signs of progress.

“We are encouraged by a recent global surge of concern. Governmental bodies are making climate emergency declarations. Schoolchildren are striking. Ecocide lawsuits are proceeding in the courts. Grassroots citizen movements are demanding change, and many countries, states and provinces, cities, and businesses are responding,” the paper reads.

CITIZENS’ RIGHTS TO PROTEST
While governments and businesses around the world are responding to climate-concerned boycotts* and protests, Prime Minister Scott Morrison recently announced he wants to prevent Australians exercising their right to engage in similar action, though how the government plans to do so remains to be seen, if such a practice ever actually eventuates*.

University of Sydney school of environment and life sciences’ Dr Thomas Newsome, one of the lead authors of the warning, is one of many Australians who have voiced opposition to Mr Morrison’s proposal.

“I think the growing concern about inaction to reduce greenhouse gas emissions is causing people to speak out in many different ways. Peaceful protesting and joining the strikes is one way to send a message, and people have the right to do so,” Dr Newsome said. Hundreds of thousands of schoolchildren left school in September to call for action on climate change as part of global strikes.

Dr Newsome is one of five scientists from the University of Sydney, Oregon State University, University of Cape Town and Tufts University who authored the warning, published today in the journal BioScience.

“From the data we have it’s clear we are facing a climate emergency,” Dr Newsome said. “Scientists have a moral* obligation to warn humanity of any great threat,” he added, though he also sought to avoid being dismissed as yet another doomsayer*. University of Sydney’s Dr Thomas Newsome co-authored the warning with four other scientists from around the world.

‘NOT HOPELESS’
“While things are bad, all is not hopeless. We can take steps to address the climate emergency,” Dr Newsome said.

“Some people may not think they can make a difference, but lots of small changes can inspire larger scale shifts in policy* and economic frameworks,” he added.

“Because the impacts of climate change are becoming more obvious and damaging, for example record heatwaves and increasing extreme weather events, it is likely that people will start to pay more attention and urge governments, policymakers and the business community to take action,” Dr Newsome said.

But there’s more to measure than just the temperature of the Earth, and Dr Newsome said a “broader set of indicators should be monitored, including human population growth, meat consumption, tree-cover loss, energy consumption, fossil-fuel subsidies and annual economic losses to extreme weather events”.

“Despite 40 years of major global negotiations, we have generally conducted business as usual and are essentially failing to address this crisis … climate change has arrived and is accelerating faster than many scientists expected.” An aerial image of a drought affected farm in Queensland, where 66 per cent of the state has been drought declared.

In 1979, scientists from 50 countries met at the World Climate Conference in Geneva, a conference that was repeated in 1990 and again in 2009, and are among a number that have resulted in calls for action.

The report said that despite this, greenhouse gas emissions continue to rise, along with an increase in per capita* meat consumption and the number of airline passengers, as well as increased losses in global tree coverage, which reduces the Earth’s capability* to absorb carbon dioxide from the atmosphere.

Oregon-based non-profit The Worthy Garden Club in the US, a collective of businesses, energy specialists, agriculturists, scientists, and astronomers, provided partial support for the research. A rigger working on a 3200 panel solar farm in the Northern Territory helps the growth of renewable energy sources that scientists say are key to limiting climate change.

Protesting extinction is as old as the dinosaurs

CLASSROOM ACTIVITIES
1. What can you do?
Think about the six measures recommended by the scientists. Use them to help you to write a list of everyday things that you and your school can do to help.

2. Extension
You have read in the story that our Prime Minister Scott Morrison wants to prevent people from taking action against climate change.

What do you think about this? Write to the Prime Minister explaining why you agree or disagree with this statement. Remember to give lots of reasons and evidence to make your letter very convincing.

VCOP ACTIVITY
6 Clear Measures
Make a poster to help represent the 6 clear measures where immediate steps must be made to slow down the pace of climate change.

You can label the poster or use pictures to help represent the 6 categories.

Make it as clear as possible so people understand the easy changes they can start making immediately.

HAVE YOUR SAY: What measure can you take to address climate change? Do you think people should protest to call for action on climate change?
No one-word answers. Use full sentences to explain your thinking. No comments will be published until approved by editors.