A boom floats across a small bay near the dam wall at Warragamba Dam, NSW, on January 29, 2020. Although there have been no major impacts on drinking water yet from the intense fires, authorities know that the risks will be elevated for years while the damaged catchment areas recover. Picture: AP

Sydney’s Warragamba Dam has been draped with fabric curtains to trap ash and sediment* expected to wash off bushfire-scorched slopes.

Two massive booms* support the curtains, which hold back ash that floats on the surface.

The reservoir supplies water to more than five million people, holding 80 per cent of untreated drinking water for the Greater Sydney area in New South Wales.

Bushfires have burned almost all the perimeter* of the dam.

In Canberra, ACT, authorities are hoping a new water treatment plant and other measures will prevent a repeat of water quality problems and disruption that followed the 2003 bushfires.

Though there have not yet been major impacts on drinking water systems that supply cities in southeast Australia as a result of the recent bushfires, because of the size and intensity of the fires, the potential impacts are not clear yet. Firefighters watch as a helicopter water bombs a spot fire in the Orroral Valley south of Canberra, ACT on February 2, 2020. Picture: Getty Images

More than 104,000 sqkm has burned across Australia since September.

“The forest area burned in Australia within a single fire season is just staggering,” said Stefan Doerr, a professor at Swansea University in Wales, UK, who studies the effects of forest fires on sediment and ash run-off.

“We haven’t seen anything like it in recorded history.” 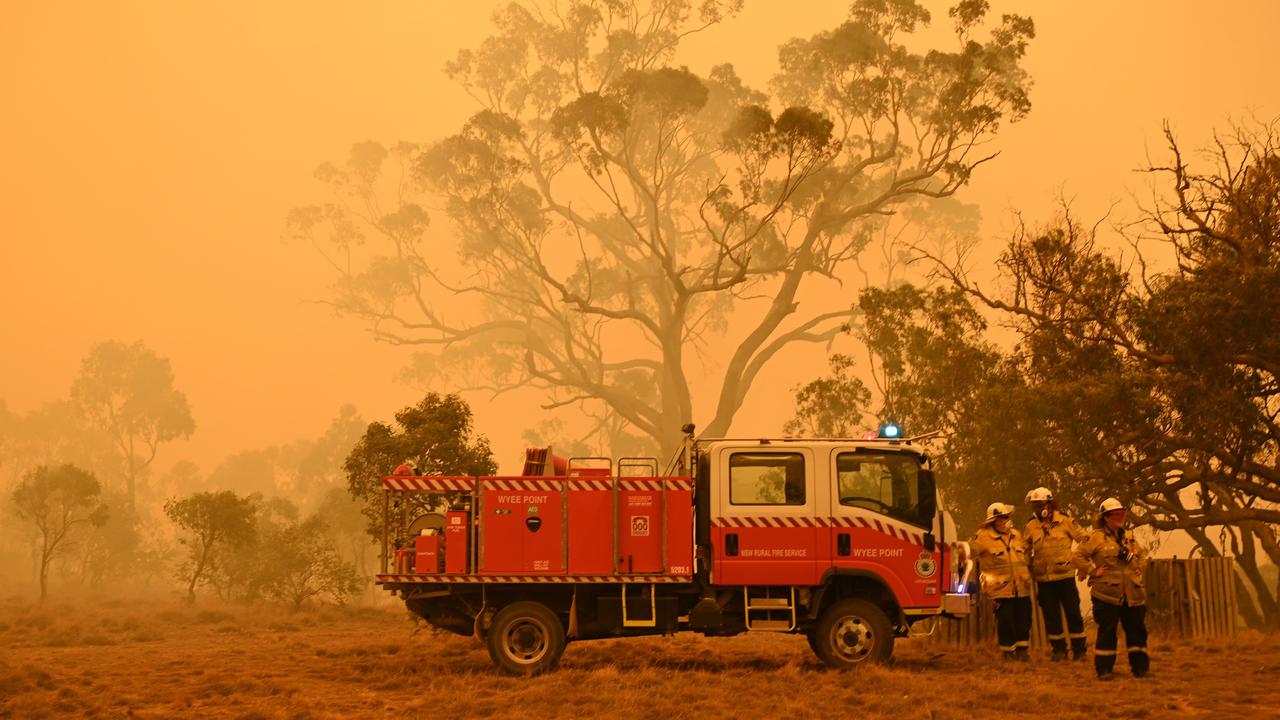 Firefighters protect a property from bushfires burning near the town of Bumbalong south of Canberra on February 1, 2020. Picture: AFP

A GLOBAL CONCERN
The situation in Australia illustrates a growing global concern: Forests, grasslands and other areas that supply drinking water to hundreds of millions of people are increasingly vulnerable to fire due in large part to hotter, drier weather that has extended fire seasons, and more people moving into those areas, where they can accidentally light fires.

When rain does fall, it can be intense, dumping a lot of water in a short period of time, which can quickly erode bare slopes and wash huge volumes of ash, sediment and debris into waterways and reservoirs. Timbers from a small bridge over a creek are still burning after fire destroyed the crossing near Burrill Lake, NSW. The ground around is bear and will be at risk of washing away when there is heavy rain. Picture: AP

Besides reducing the amount of water available, the run-off also can introduce pollutants, as well as nutrients that create algae blooms.

The area that burns each year in many forest ecosystems* has increased in recent decades, and that expansion likely will continue through the century because of a warmer climate, experts say.

Very hot fires burn organic matter and topsoil needed for trees and other vegetation to regenerate, leaving nothing to absorb water. The heat also can seal and harden the ground, causing water to run off quickly, carrying everything in its path.

That in turn can clog streams, killing fish, plants and other aquatic life necessary for high-quality water before it reaches reservoirs. Already, thunderstorms in southeast Australia in recent weeks have caused debris flows and fish kills in some rivers.

“You potentially get this feedback cycle,” where vegetation can’t recolonise* an area, which intensifies erosion of any remaining soil, said Joel Sankey, research geologist for the US Geological Survey.

PREPARING FOR FIRE
Canberra’s water authority has prepared for fire by collecting water from three catchment areas instead of two, and it can switch among sources if necessary, said Kristy Wilson, a spokeswoman for Icon Water, which operates the system. Water can be withdrawn from eight different levels within the largest dam to ensure the best-quality water, even if there is some sediment, she said. Millions of litres of water pour over the Cotter Dam on the outskirts of Canberra while it was being built in 2012.

That is paired with simpler measures such as using straw bales, sediment traps and booms with curtains to control silt, and physically removing vegetation around reservoirs and in catchment areas to reduce fire fuel, she said.

People who live in regional areas are calling for more to be done to ensure quality drinking water outside the big cities, too.

Ageing or inadequate* water infrastructure*, continuing drought plus demand for water to fight fires has meant water shortages in some communities, with many complaints of poor-quality water. Lithgow, NSW, residents, for instance, have complained of brown or even black water that looks like Coca-Cola in the wake of the Gospers Mountain fire.

Despite the appearance of Lithgow’s water, NSW Health advised that the water has been tested and there are no health risks, according to Nine News.

Scientists say that eventually, some communities might need to switch their water sources because of fires and drought. Perth, WA, for instance, gets much of its water from underground and desalination*. Residents in Lithgow, NSW, have complained of brown or black water rather than the clear water we prefer to drink.

CLASSROOM ACTIVITIES
Flow-on effects
Bushfires, like other environmental disasters can have significant flow-on effects. The recent bushfires are no exception leaving the potential for water pollution a real risk for the Greater Sydney area.

Use the information in the article to create a flow chart to show how the recent bushfires will still have an effect long after they have been put out. Include on your chart all the effects that bushfires can have and how these (or some of these) can lead to water pollution. Your flowchart can include a combination of written and illustrated content to highlight the connection between the effects.

Can you add some causes to your flow chart? What might have caused the bushfires this fire season to be so intense?

Draw a labelled diagram of what you imagine the ACT dams may look like. Label the preventative water quality measures they have included and explain how they help maintain water quality.

HAVE YOUR SAY: Have you noticed changes in your drinking water as a result of drought or fires?
No one-word answers. Use full sentences to explain your thinking. No comments will be published until approved by editors.