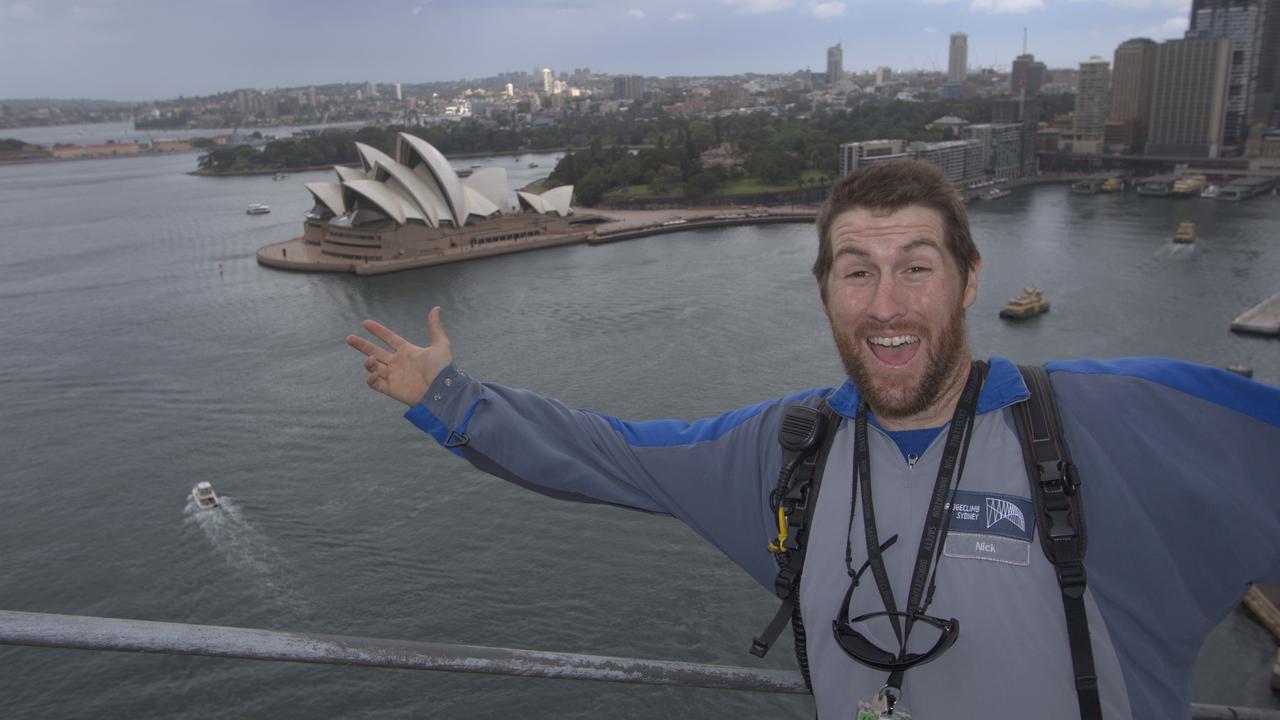 Nick Hayes at work up on the Sydney Harbour Bridge. Picture: BridgeClimb Sydney

The Sydney Harbour Bridge is the tallest steel-arch bridge in the world, its top 134m above sea level.

Nick Hayes has climbed it about 2000 times, sometimes three times in one day!

And although he loves doing it, he’s not just doing it for fun: it’s his job. He has been a bridge climb leader since 2010, although he took two years off a while ago to travel the world.

Could this be the world’s best job? Kids News talked to Sydney-born Nick about a typical day at work for the tour company BridgeClimb Sydney and some of his more memorable moments on the job.

What is the best thing about our job?
It’s like getting to travel without leaving home! Meeting people from everywhere from Albuquerque to Adelaide to Angola, and learning about how life works in their corner of the world. And of course, THAT view.

What is your favourite bridge memory?
Spending the morning with childhood idol David Beckham and his sons Romeo and Cruz on a private tour. He loved chatting about sports and life and kids and was super down to earth. Second would be helping Prince Harry’s climb on the ladders and meeting with him and his response being “it’s nice to be greeted by a fellow ginger*” even though I’m not sure I agree that I’m a ginger!

What else are you good at?
I don’t mind trying to channel* my inner endurance athlete from time to time. The longest run I’ve done is from Melbourne to Sydney (900km, or 21 marathons in 21 days) and raised $60,000 for the McGrath Foundation in the process. I have competed in Ironman triathlons as well. I’ve raced in bike races without a bike (on foot), and all sorts of wacky things to keep me entertained.

If I’m leading tours, it’s generally a three-hour tour, then a half-hour lunch break, then another three-hour tour (and sometimes a third tour if it’s really busy!). A group on a bridge climb on the Sydney Harbour Bridge, New South Wales on October 3, 2020. The view from up there is incredible. Picture: NCA NewsWire/Bianca De Marchi

Which part of the view do you like best?
I love looking at the ocean, but on really clear days when you can see the Blue Mountains it’s awesome — they really look blue from so far away.

What is the best thing you have seen from up there?
I love trying to spot wildlife in the water of the Sydney Harbour. I’ll often see many different types of fish, jellyfish and stingrays, but I have seen seals, dolphins and even penguins. I’m still waiting to see a shark though.

What is the hardest part of your job?
We climb in nearly all types of weather so sometimes when it’s really windy it’s quite hard to communicate to climbers, and is a little harder on my voice after a long day.

Why did you choose this job?
I was sick of doing an office job and wanted to do a job that was outdoors and fun … and it is!

Do you get tired or injured?
I like to run and ride my bike in my spare time so I like to think I’m in good shape, so climbing the bridge is a good fit for me. But getting enough sleep and eating healthy foods is very important, and staying well hydrated especially on three-climb days in the heat of summer. Three-climb days are the only time I’ll get a bit tired. 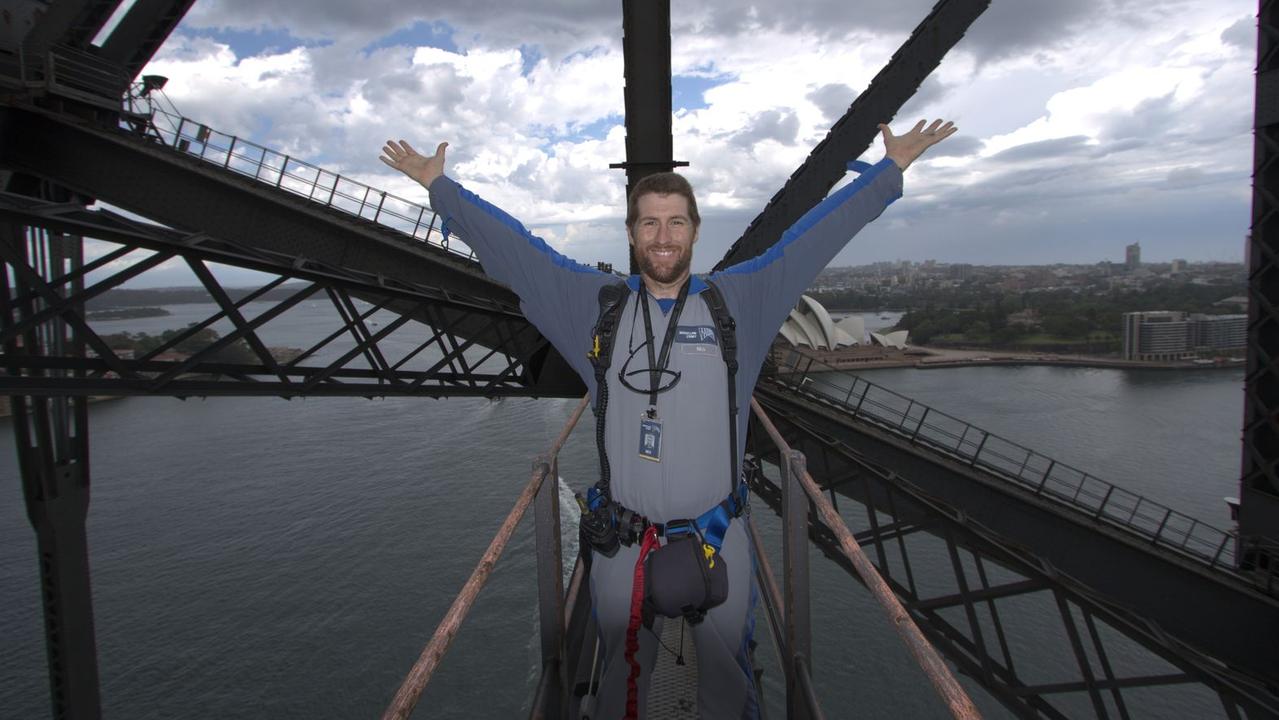 Nick Hayes on the Sydney Harbour Bridge. He’s not scared of the height and loves helping people conquer their fears. Picture: BridgeClimb Sydney

Do you feel scared up there?
No I love it! Although some climbers climb the bridge to challenge themselves and conquer* their fear of heights. That’s really rewarding to be a part of.

What is the silliest question you have been asked?
I once had a foreign climber ask if an island we’re looking at in the harbour was New Zealand. I didn’t know how to tell them politely that New Zealand is over 4000km away and we’re definitely not able to see it from here! Thousands of people cross the Sydney Harbour Bridge on the day of its official opening on March 19, 1932.

The public was allowed to walk across the deck of the bridge when it was first opened in 1932 and again 50 years later in 1982.

On May 28, 2000, about 250,000 people walked across the bridge in a continuous stream that lasted nearly six hours as part of what is called the Walk for Reconciliation*, in which people showed support for reconciliation between Indigenous and non-Indigenous Australians. It was the largest political demonstration ever held in Australia. People walking across the Sydney Harbour Bridge for Walk for Reconciliation, May 28, 2000. Picture: Troy Bendeich

Typical day in the life of a ballet dancer

CLASSROOM ACTIVITIES
1. Write a Job Ad
Write a job advertisement for a new person to join the BridgeClimb team with Nick. Include a description of what you think are the main duties of the job, the skills and training that you think are needed and the personal qualities that you would need to do this job.

2. Extension
What would be your dream job when you grow up? Describe the job, what’s so great about it and why you would be perfect for it!

HAVE YOUR SAY: What would you like about this job? What wouldn’t you like?
No one-word answers. Use full sentences to explain your thinking. No comments will be published until approved by editors.