Kids News explainer: What and where is the equator? 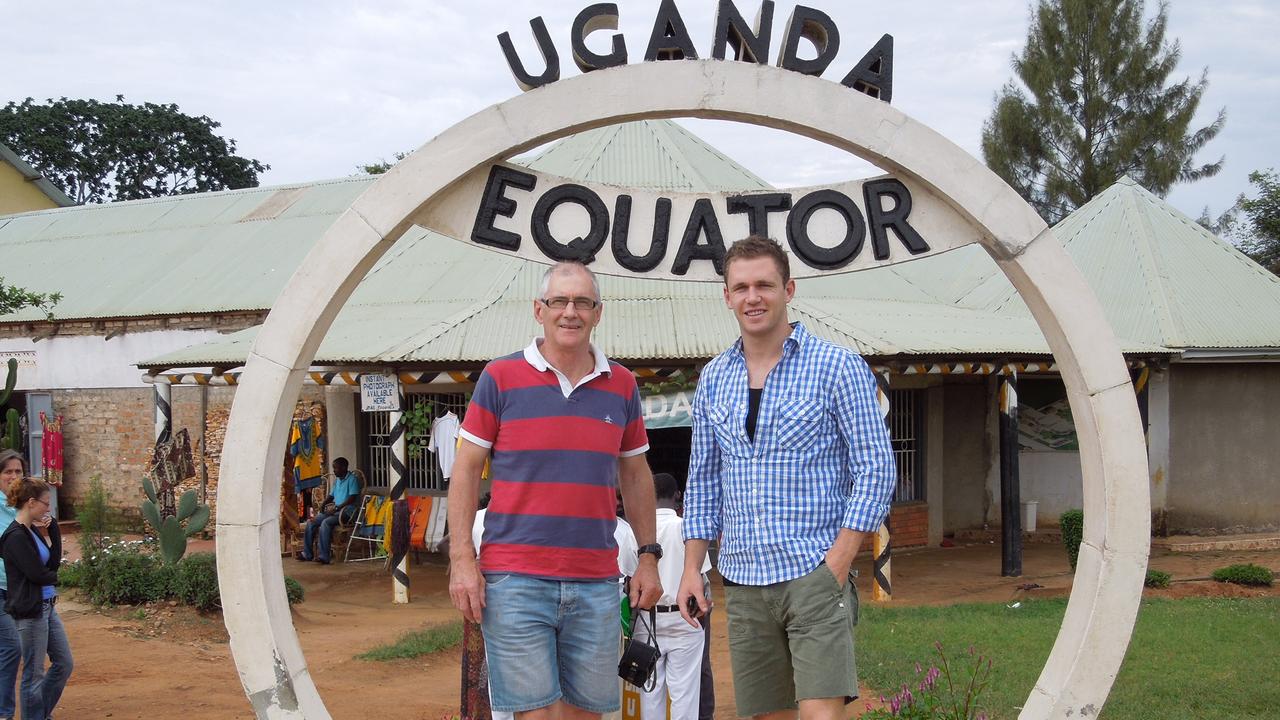 Geelong Cats AFL player Joel Selwood (right) and his dad, Bryce Selwood, at the equator in Uganda on a holiday in recent years. Picture: supplied

A group of paratroopers has set a world record for the most crossings of Earth’s equator during a parachute jump by a team.

The professional paratroopers — soldiers expert in parachuting — from Venezuela and Ecuador achieved 12 crossings of the equator in a single jump over the beaches of Coaque, Ecuador.

They were successful on January 10 after two unsuccessful attempts due to poor weather conditions the previous day, Guinness World Records announced.

The paratroopers made the jump consecutively*, and after just 20 minutes in the air they managed to do an incredible 12 crossings. 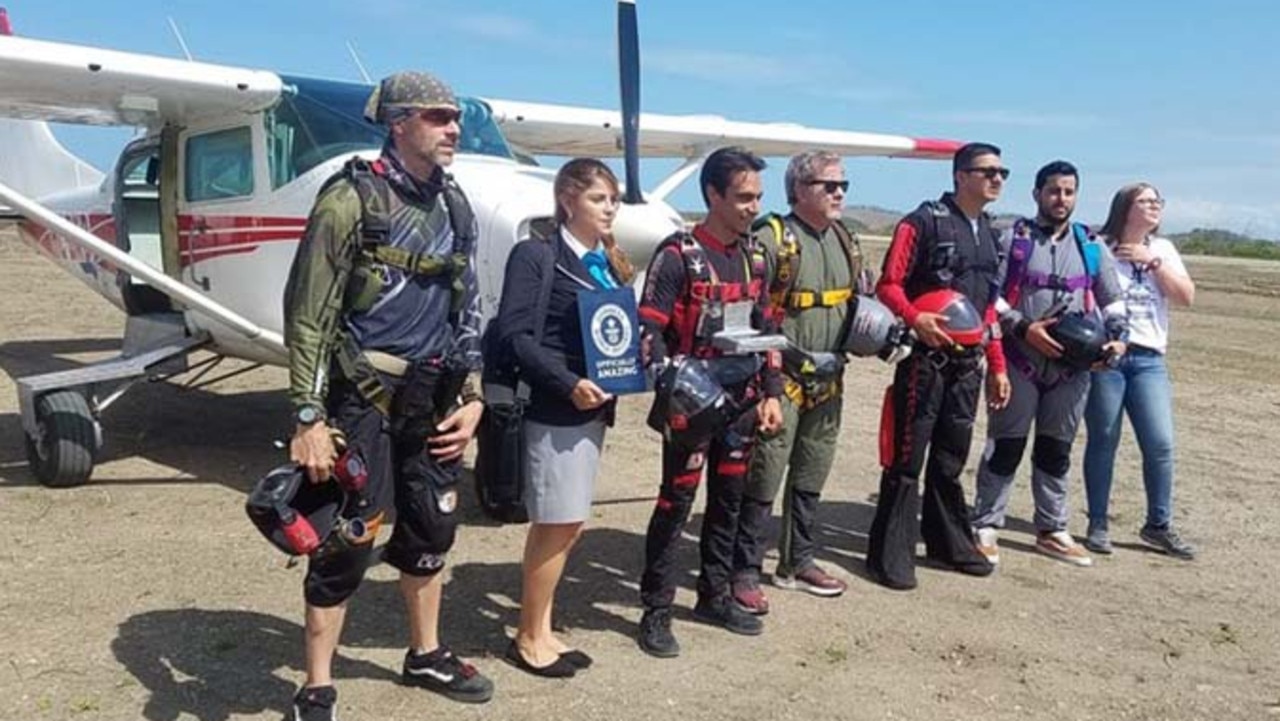 Paratrooper José Rafael Barcia said the jump was not about a line on a map that separated two halves of the Earth, but where two halves met.

“This achievement is special because it is accompanied by an important message. We want people to know that the equator is not where the world is divided, but where the two hemispheres meet. And with that purpose in mind, we descend with the zigzag-shaped parachutes, as if suturing* an imaginary line. In this way, we prove to the world that when there are people together, great things can be done.”

The Guinness World Record got Kids News wondering what and where the equator is and who invented it. Here’s what we learned.

The equator is also perpendicular* to the Earth’s axis, which is another imaginary line, made by drawing a straight line through Earth from the North Pole to the South Pole, just like if you stuck a round apple on a stick through its core.

Other planets and spherical* bodies in space, such as the Sun and other stars, Earth’s Moon and other moons, all have equators.

WHERE IS IT?
The equator runs through 13 countries: Brazil, Columbia, Venezuela, Ecuador in South America, plus Congo, Democratic Republic of Congo, Gabon, Uganda, Kenya, Somalia in Africa plus the Maldives (South of India), Indonesia (north of Australia) and Kiribati (in the Pacific Ocean north of Fiji and Samoa).

The equator also runs through the Pacific Ocean, the Atlantic Ocean and the Indian Ocean. 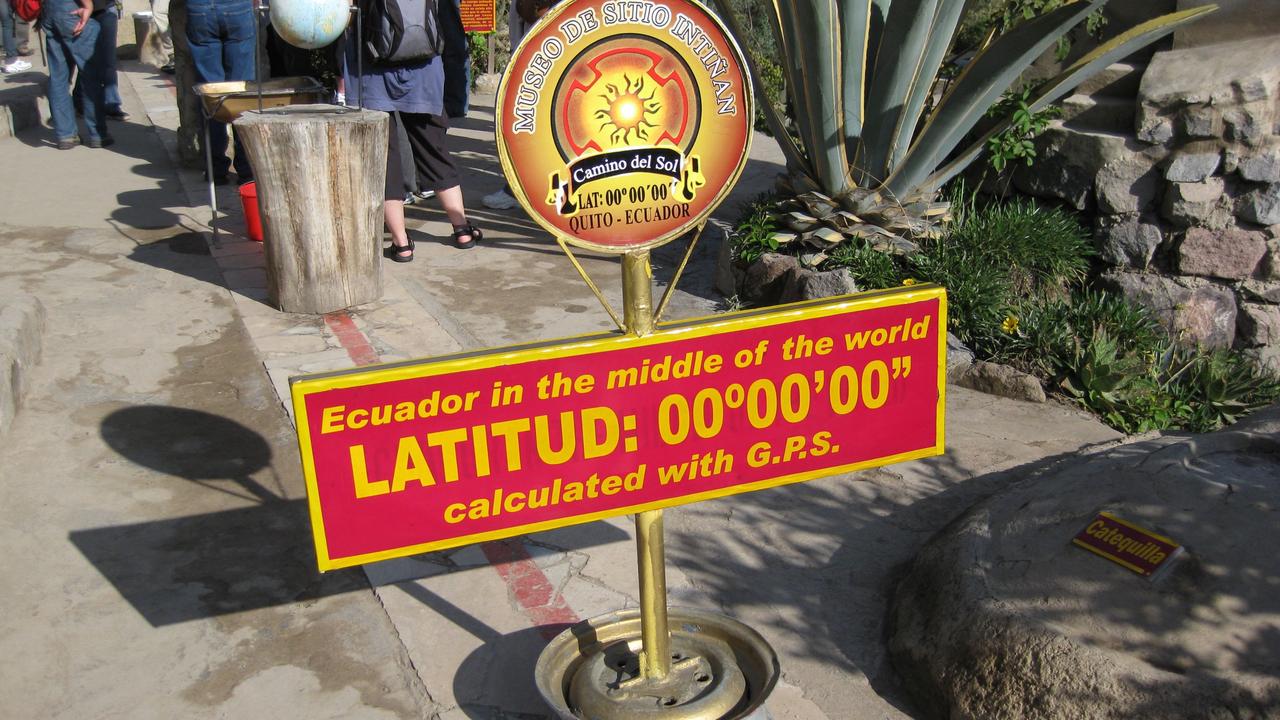 WHO INVENTED THE EQUATOR?
No one discovered the equator because it is just a line on a map, but a team of French explorers mapped it in 1736. A woman pushes down on the North Pole on a globe of the world, which is a good way to imagine the real shape of the Earth, bulging a little around the equator.

WHAT IS THE EQUATORIAL BULGE?
The equator is 40,075km long.

Although we think of Earth as a perfect sphere or ball, it’s not quite spherical. It is slightly fatter at the equator, as though a big hand pushed down on the North Pole. This is called the equatorial bulge.

The equatorial bulge means the Earth’s diameter (distance from one side to another through the middle) is longest at the equator, where it is 12,756km. This is about 43km longer than the diameter between the two poles.

The equatorial bulge is created by the outwards forces on the Earth as it rotates. A point on the equator spins faster (because it has farther to travel for a full rotation) than a point closer to one of the poles. A faster spin increases the outwards force, which causes the Earth to bulge.

Gravity is slightly weaker along the equator because of the equatorial bulge.

Weaker gravity means the equator is the ideal place to launch rockets into space because it uses less energy to push a rocket away from the Earth into space. NASA launches rockets from the Kennedy Space Center in southern Florida, as close to the equator as possible on mainland US. WHAT IS CROSSING THE LINE?
Sailors have rituals and celebrations when they cross the equator, which they call crossing the line.

A nickname for sailors who haven’t ever crossed the line is tadpole, pollywog or slimy pollywog and other sailors play practical jokes on them.

Sailors who have crossed the equator are nicknamed shellbacks, trusty shellbacks, honourable shellbacks, or sons of Neptune, the god of the sea in Roman mythology.

FAST FACT
Sunrise and sunset at the equator are the fastest on Earth and it only takes a few minutes to go from dark to light and light to dark.

Man who found Titanic out to find Earhart

CLASSROOM ACTIVITIES
1. Write a Diary
Imagine you are one of the paratroopers in today’s story. Write a diary entry for the day that you made the record-breaking jump.

2. Extension
Why do you think that we need to know about the equator?

Write paragraphs explaining your answer to this question

HAVE YOUR SAY: Has anyone in your family crossed the equator? Where?
No one-word answers. Use full sentences to explain your thinking. No comments will be published until approved by editors.