Michael Theobald, with his Mother Sashi, is celebrating his first birthday with the gift of life. Picture: Jay Town

Little Michael Theobald just celebrated his first birthday after being given the most generous gift of all — a new liver and a second chance at life.

Michael spent the first six months of his young life in hospital after two early medical problems were discovered. He had a slowed heart rate and when he couldn’t feed properly on his mother’s breastmilk, doctors also found the levels of ammonia* in his blood were at toxic*, life-threatening levels.

“The breastfeeding and the heart problem initially* saved his life,” his mum Sashi Theobald said.

Doctors at the Royal Children’s Hospital in Melbourne told the family their boy had a rare genetic disorder*. He lacked one enzyme* that prevented him from getting rid of nitrogen* from his body. The condition is called Ornithine transcarbamylase deficiency.

“No matter what the team tried to do, he seemed to be going downhill,” Mrs Theobald said.

It was clear a liver transplant* was Michael’s only chance of controlling the build-up of ammonia and saving his life. 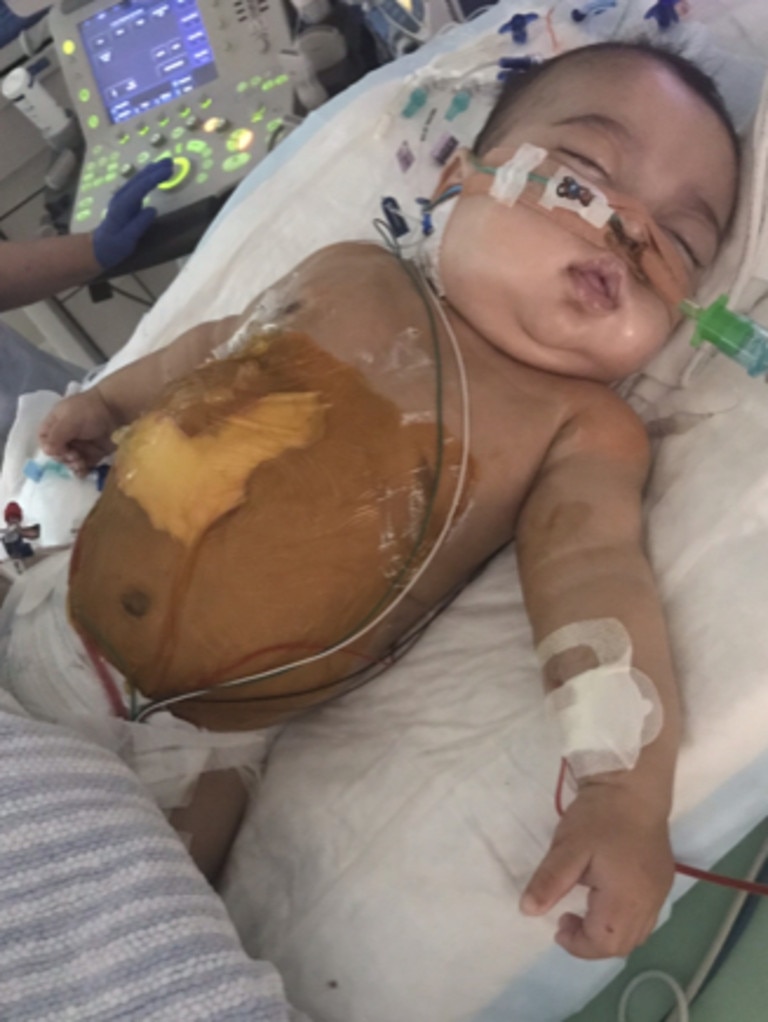 Michael Theobald during his treatment at the Royal Children’s Hospital earlier this year.

Michael’s name went to the top of the organ donor transplant waiting list and his mum started preparing herself to donate her own liver to her son.

But Michael’s most precious gift came from a stranger. A new liver generously donated thanks to a decision made by a grieving* family who had lost a loved one.

“I was ready to get on that operating table on the Thursday, and he got the transplant on the Tuesday,” Mrs Theobald said.

“It’s given him a chance to live.

“I think about the donor a lot. I’ll never forget them. My son is proof just how much a liver changes a life. It’s given him a second chance. He wouldn’t be here without it.”

This week, as part of Donate Life week, Australians are encouraged to talk about organ donations with their own families and consider joining the Australian Organ Donor Register. WHY DO WE NEED ORGAN DONATIONS?
Organ transplants save lives.

People who need an organ transplant are very sick because their own organ is failing.

Organ transplants are made possible through organ donation, which is often described as the “gift of life”.

There are two types of organ donation:

WHAT ORGANS CAN BE DONATED? What organs you can donate.

HOW MANY ORGANS ARE DONATED EACH YEAR?
Last year (2018) in Australia, 1544 people had an organ transplant from 554 deceased organ donors. This was possible because the families of the people who died generously decided to donate the organs of their loved ones to save the lives of other people.

Organ donation is very rare. Less than 2 per cent of people who die in hospital are able to become organ donors.

This is because organ donation is only possible in certain circumstances. The person needs to have been on “artificial ventilation” — a breathing machine — in the intensive care unit of a hospital when they died.

CAN ANY OTHER BODY PARTS BE DONATED?
Yes. Various types of human tissues can also be donated, including heart valves and other heart tissue, bone, tendons, ligaments, skin and parts of the eye such as the cornea and sclera.

The biggest myths about organ donation

HOW DO PEOPLE BECOME ORGAN DONORS?
When a person dies in a situation where they could become an organ donor, the possibility of organ donation is raised with the person’s family.

Hospital staff also check the Australian Organ Donor Register to find out whether the deceased person had registered their decision about organ and tissue donation. (This decision can be a “yes” or “no”).

A large number of medical tests are also performed to see if the deceased person’s organs and tissues are suitable for donation.

In Australia, families are always asked to agree or “consent” to organ donation. That is why it is important for Australians to tell their families and loved ones whether or not they would like to be an organ donor, and to join the Australian Organ Donor Register.  Anyone aged 16 or over can join the register.

If organ or tissue donation goes ahead, the organ donor’s body is always treated with dignity* and respect*.

Donor families and transplant recipients can write anonymous, de-identified letters to each other through DonateLife and the hospital transplant units.

To find out more about organ donation or to join the Australian Organ Donor Register (if you are aged 16 or above), visit www.donatelife.gov.au

What is ear wax and how big can it grow?

Weird ways tech could be changing our skeletons

CLASSROOM ACTIVITIES
1. Letter to a hero’s family
Write an open letter to the families of organ donors, letting them know how their loved one’s “gift of life” has helped others. What would you say to them? Make sure you express your thoughts and feelings in a sensitive way.

2. Extension
Visit the DonateLife website www.donatelife.gov.au and choose one of the donation stories featured on the site. Read the story and write a brief summary of what happened. Come up with five words to describe how this story made you feel.

HAVE YOUR SAY: How did reading this story about Michael and organ donation make you feel?
No one-word answers. Use full sentences to explain your thinking. No comments will show until approved by editors.