What is Remembrance Day and how do we commemorate it? Millions of people around the world pause in silence to mark Remembrance Day on November 11.

In Australia, one minute’s silence is observed* at 11am. Ceremonies are held around the nation and many schools also join the commemorations*.

It is a chance for people to think about those who have fought and died in conflicts since World War I. 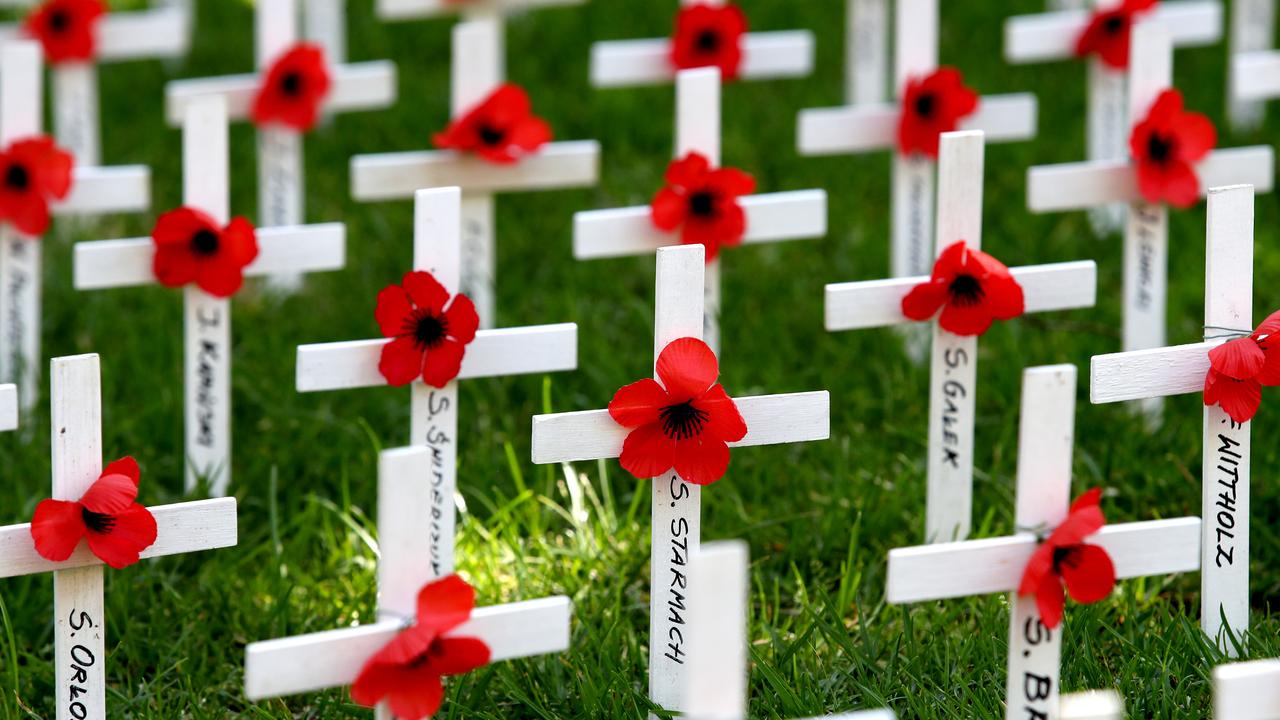 Crosses bear poppies and the names of the fallen for Remembrance Day in Adelaide, South Australia, in 2018. Picture: AAP Image

This was known as an armistice, a suspension in fighting to allow for a peace agreement to be reached between the defeated Germans and the victorious allied nations, which included Britain, France and Australia.

Between 9 million and 13 million people died in World War I, including more than 60,000 Australians. Historians believe up to a third of those who died were not buried in a grave marked with their name. Soldiers, mules and carts are stopped on a street in a ruined village in the Ypres area of Belgium on the Western Front in August 1917. Picture: Australian War Memorial

Many people felt it was important to remember their sacrifices and so the moment the guns fell silent – the 11th hour of the 11th day of the 11th month – was chosen as the time and day the allied nations would remember.

Remembering in silence
Observing two minutes’ silence was introduced on the first anniversary of the armistice in 1919.

It was suggested by Australian journalist Edward Honey, who was working in London at the time, and also a South African man, Sir Percy Fitzpatrick, who presented the idea to the British government.

King George V then asked all the people of the British Empire to observe two minutes’ silence at 11am on November 11. Four Australian soldiers walk along a duckboard track near Zonnebeke in an area that was captured by the Australians in the fighting of the Third Battle of Ypres on the Western Front in September and October 1917. Picture: Australian War Memorial

The Unknown Soldier
On the second anniversary of the armistice in 1920, the remains of an Unknown Soldier from the Western Front, a 645km stretch of land across France and Belgium, were interred* with full military honours in the church of Westminster Abbey in London and at the Arc de Triomphe monument in Paris. Australian soldiers gather in a trench while fighting on the Western Front in France near the Somme River during World War I. Picture: Australian War Memorial

An unknown Australian soldier was interred at the Australian War Memorial in Canberra in 1993, the 75th anniversary of the end of World War I. Before being returned home to Australia, the soldier had been buried in an unmarked grave in a World War I cemetery near the French town of Villers-Bretonneux.

The Unknown Soldier represents all those who have died at war protecting our country.

Renaming Armistice Day
Australia and Britain changed the name of Armistice Day to Remembrance Day after the end of the Second World War. The new name was considered more appropriate for a day which would commemorate all war dead, not just those from World War I.

How Australia remembers
Australia’s main Remembrance Day commemoration takes place at the Australian War Memorial in Canberra. This ceremony is called the Remembrance Day National Ceremony and includes the laying of a wreath* and the observance of a minute’s silence at 11am. Prime Minister Scott Morrison places a wreath at the bottom of a monument at the Australian War Memorial on Remembrance Day in 2020. Picture: Gary Ramage

Major ceremonies are also held in the capital cities of all our states and territories.

One of the most moving is at Melbourne’s Shrine of Remembrance. The Shrine was designed so that a beam of sunlight shines through an opening in the roof at precisely 11am. The beam of light lands on the Stone of Remembrance on the floor inside the Shrine, lighting up the word “love” in the engraved statement “Greater love hath no man”.

With Covid-19 restrictions limiting the number of people who can attend services in person this year, many commemorations are being live streamed over the internet. Poppies
You might have seen people wearing or selling red poppies around the time of Remembrance Day.

During World War I, red poppies were among the first plants to spring up in the devastated Western Front battlefields in northern France and Belgium.

According to folklore*, the poppies got their vivid red colour from the blood of the soldiers that soaked into the ground.

So the poppy became a powerful symbol of the sacrifices made by soldiers during World War I.

Today, poppies are sold in Australia by the Returned Services League (RSL) to raise money to support veterans* and their families. Personal messages were placed among the poppies on the Roll of Honour on Remembrance Day at the Australian War Memorial in 2018. Picture: AAP Image

Veterans go ‘back to Hell’ through VR films

What does Anzac Day mean?

2. Extension
“Events like Remembrance Day should not happen because they celebrate wars. That is wrong.” What do you think about this statement? Do you agree or disagree? Write paragraphs explaining your answer and opinion on this. Use lots of examples to make your paragraphs convincing.

VCOP ACTIVITY
A letter of thanks
There are so many people who have fought for us, or who are still fighting for us even today. They fought to make sure we are safe, and to make sure we have a better tomorrow.

Whether it’s the soldiers, other defence force officers, or maybe they are more local public service officers, educators and health workers (police, nurses, firefighters, ambulance officers, teachers, crossing guards, doctors etc), they are all trying to make the world a better place to live in.

Choose someone to write a thankyou letter or card to, and explain why you want to thank them for what they do.