Winter weather often brings a lot of noticeable snot, but what does it tell us about our health? We all make about 1.4 litres of snot every day, whether we’re sick or healthy. Yuck.

We swallow most of it. Double yuck.

Not many of us know much about snot — also called mucus — because it’s not a very nice thing to talk about.

And most of the time, we don’t notice that we’re making and swallowing it.

But when we’re suffering from an allergy, a cold or the flu, there seems to be so much snot we can feel like we’re drowning in it.

We’re not. We don’t produce any more snot when we’re sick than we do when we’re healthy. It just changes to become thicker or runnier and those changes are noticeable and make us feel uncomfortable. We mostly don’t notice mucus unless there’s something wrong and the balance of mucus and watery liquid isn’t how it should be. Picture: iStock

Here are a few of the most important things you’ll need to know to become your own snot detective. And be sure to leave everyone else’s snot alone.

WHAT IS SNOT?
Doctors and people who don’t like saying snot call it mucus.

Mucus is a sticky substance made in your nose and sinuses. The sinuses are a series of hollow sections in your skull, above and beside your nose.

Mucus is made to filter air before it goes into your lungs. Dust, pollen, smoke and other polluting things stick to the mucus. 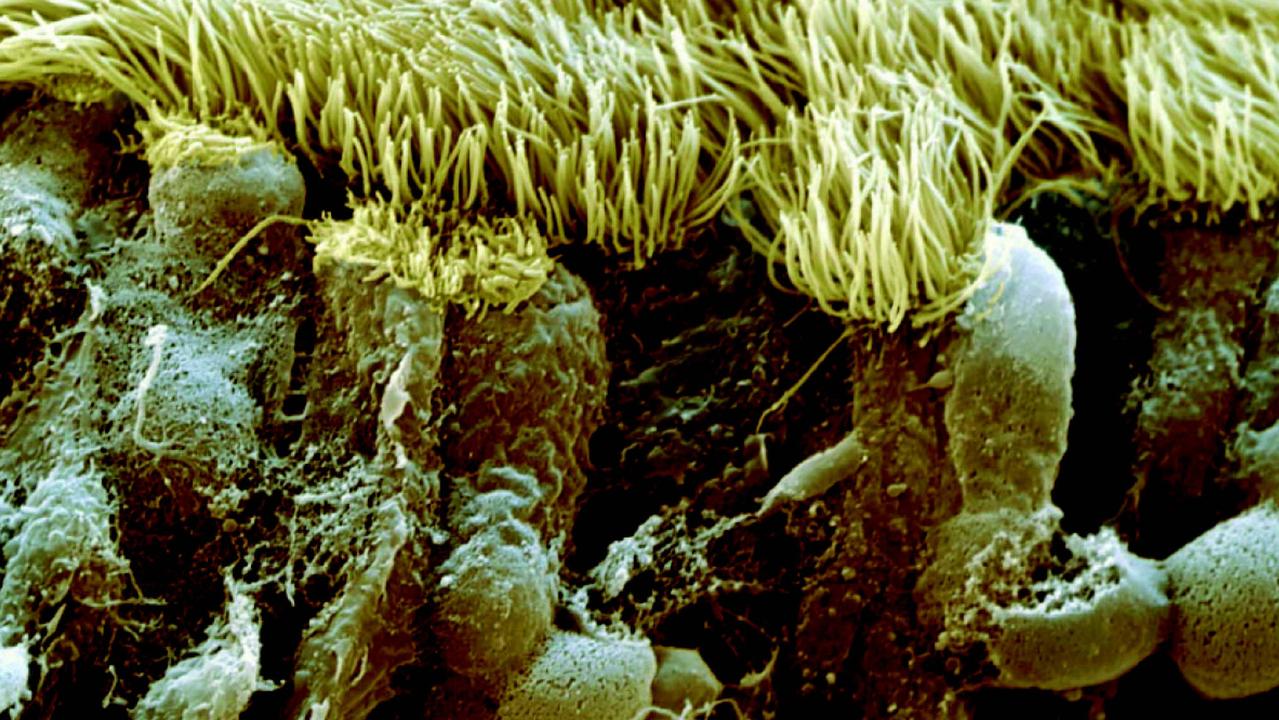 A view with a microscope of the inside lining of a nose, with hair and gloopy mucus visible. Picture: from the book “Inside the Body: fantastic images from beneath the skin”

Its other job is to lubricate or moisturise the inside of your nose, throat, lungs and digestive system* to stop the surfaces drying out and cracking.

What most of us think of as snot is actually a mix of two things: mucus and a more watery secretion*.

WHY IS SNOT SOMETIMES RUNNY AND SOMETIMES THICK?
When we’re healthy, the body produces just the right mix of mucus and the watery secretion for the best moisturising and filtering results.

If you are allergic to something — for instance, if you get hayfever — your body makes more of the watery secretion to help wash or flush out the allergens* you have breathed in and your nose drips like a tap. 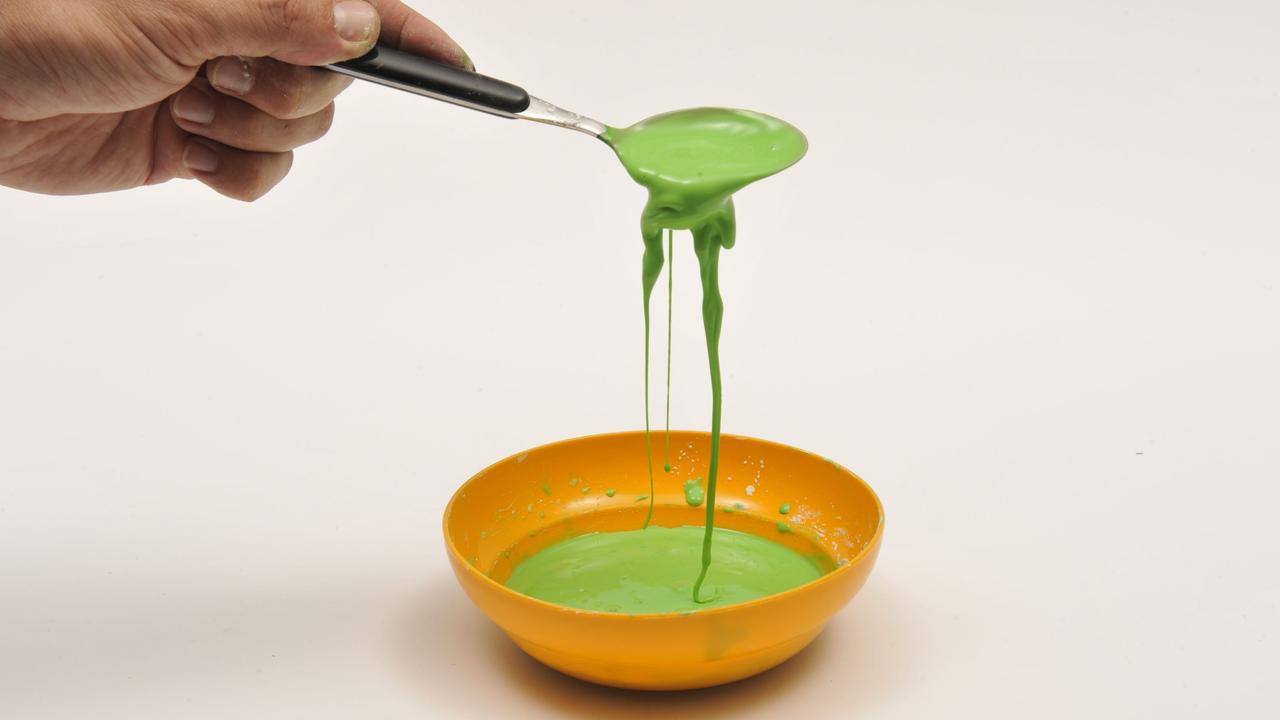 When there is not enough watery liquid mixed with mucus in your snot, it becomes very claggy. This is fake snot. Picture: from the book “The Surfing Scientist: 40 Super Human Body Tricks” by Ruben Meerman

WHAT IS PHLEGM?
Phlegm is a slightly different substance to the mucus made in your nose and sinuses. It is made in your lower airways and lungs. It is made when there is inflammation*, often in response to an infection. When we cough up a snot-like substance, it is often phlegm.

WHAT CAN MUCUS COLOUR TELL US?
Snot, mucus or phlegm can be clear, white, yellow, green or brown.

Looking at the colour of your snot or phlegm is interesting, but it may not give you a very accurate answer about your health.

If it is yellow, green or brown it could be a sign that your body is fighting an infection such as a cold, but you can have an infection and still have clear or white snot. How you feel is a much better guide to your health than snot colour. Amy Ingram, Nick Skubji and Nelle Lee were actors in a play called Out Damn Snot. Thankfully, they are covered in fake snot. Photographer: Liam Kidston

Sometimes, the colour can be just because there has been a lot of dust or smoke in the air and the snot has done its job filtering the air before you breathe it.

GOOD SNOT MANAGEMENT
Colds and other viruses such as influenza — also called the flu — are contagious and spread by droplets of snot or spit (called saliva). You can do a lot to keep yourself and others healthy by: Sneezing without covering your mouth spreads your germs out for everyone else to catch.

WHEN IS IT A COLD AND WHEN IS IT THE FLU?
A cold is a minor infection that should clear up by itself in 7-10 days. You don’t usually need to go to a doctor when you have a cold.

Common flu symptoms include a sudden fever (high temperature), body aches, extreme tiredness and a dry cough. People who have the flu may also feel unusually cold (called the chills), have a sore throat and a runny or blocked nose and not feel hungry.

If you think you or someone in your family has the flu, rest, drinking enough water and generally looking after yourself or them is important.

It’s also important if you think you have the flu to stay away from other people — particularly babies and people who are sick or elderly — to prevent spreading the infection.

Cold and flu what you should do

WHAT IS THE FLU VACCINE?
The Australian government and doctors recommend getting a flu vaccine each year.

The vaccine provides a high level of protection from the flu so that you are much less likely to be infected or you get only a very mild dose.

Scurvy making a comeback due to poor diets

CLASSROOM ACTIVITIES
1. Have Your Say!
“This story is disgusting! Kids News shouldn’t have stories about snot, it’s wrong.”

Write a text that will persuade the person who wrote this sentence to understand why it is important for kids to learn about “yucky” or unpleasant things, especially snot.

Create a script for a TV, radio or online ad. The purpose of your ad is to help people understand how snot, phlegm and other kinds of mucus play an important role in our bodies and for our health.

HAVE YOUR SAY: Have you or a family member had the flu? How was it different to a cold?
No one-word answers. Use full sentences to explain your thinking. No comments will be published until approved by editors.