This infra red satellite image shows lava from La Cumbre Vieja volcano in La Palma on October 14. A week later and experts say there is no prospect of the eruption ending in the short-term. Picture: AFP Photo/satellite image/Maxar Technologies

The surface area of Spain’s La Palma island is continuing to grow, thanks to the build up of lava from its volcanic eruption last month. Flowing into the Atlantic Ocean since the September 19 eruption, the lava is solidifying* when it hits the water, European Union scientists said.

The European Union’s Earth observation program Copernicus* confirmed that its satellite imagery showed a D-shaped tongue of molten rock had extended the island’s western shore by 338ha at the start of October.

Now four weeks since the lava river started to flow, there was still no sign of the eruption coming to an end, officials said Sunday. Lava flows down the Cumbre Vieja volcano on October 10, 2021. Since the volcano erupted on September 19, lava destroyed hundreds of hectares, but also formed peninsulas of volcanic rock, extending the surface of the island. Picture: Getty Images

Part of the Canary Islands archipelago* off northwest Africa, La Palma’s eruption has so far destroyed more than 1800 buildings, mostly homes, though prompt evacuations* have helped avoid casualties* on the island of some 85,000 people. Banana plantations* – the source of income for many islanders – have also been lost or damaged due to volcanic ash. Pictured on October 16, a member of the Spanish Ground Forces walks across a street in Las Manchas that was completely buried in ash following the eruption of La Palma’s Cumbre Vieja volcano. Picture: AFP Photo/Luismi Ortiz/Spanish Military Unit

Canary Islands President Ángel Víctor Torres said scientists monitoring the eruption have seen no indications that the eruption is abating*.

“We are at the mercy of the volcano,” Torres told reporters. “It’s the only one who can decide when this ends.”

Some 7000 people have had to leave their homes, with hundreds more advised to stay home to avoid the possible inhalation* of toxic gases.

The volcano has produced a constant rumble and roar, with dozens of minor earthquakes most days, and has covered a wide area with volcanic ash. The ash plume is several kilometres high.

Airlines have sporadically* cancelled flights to the islands, including 56 flights over Saturday and Sunday, due to the ash.

The latest satellite imagery showed the molten rock has covered 754ha, most of it countryside and farm land. Almost 60km of roads have also been ruined. 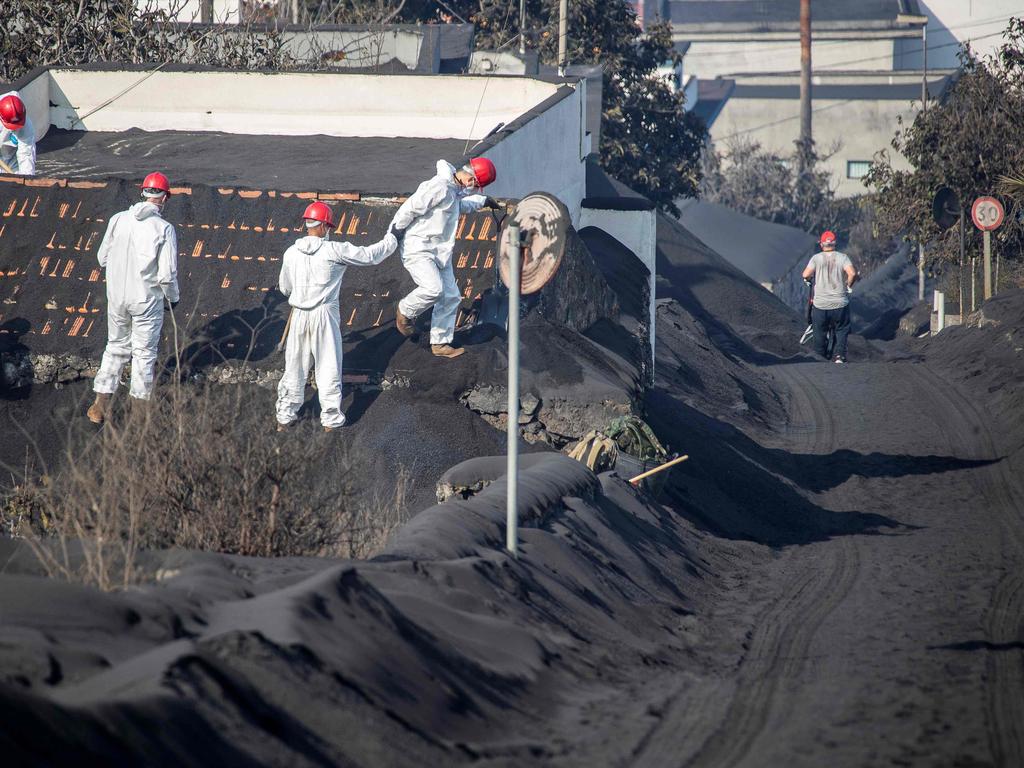 Spanish Ground Forces clean up ash in a street of Las Manchas, following the eruption of the Cumbre Vieja volcano, which to date has destroyed almost 60km of roads. Picture: AFP Photo/Luismi Ortiz/Spanish Military Unit

The island relies mainly on tourism and banana plantations and the government has pledged millions of euros (dollars) to help rebuild damaged infrastructure*.

Trade winds typical of the region were helping dispel* the plumes of water vapour and toxic gases that result when lava with a temperature of over 1000 degrees meets the ocean, where the water is 22 degrees.

But authorities remained on alert as a change in wind direction could bring toxic plumes toward the shore and further inland.

The hydrochloric acid* and tiny particles of volcanic glass released into the air can cause skin, eye and respiratory tract* irritation.

The direction of the lava flow remained a source of concern. While molten rock coming from the volcano was still running downhill like a river and tumbling over a cliff into the Atlantic, the uneven terrain* could make the lava overflow its current path. CLASSROOM ACTIVITIES
1. Erupting volcano
As the volcano continues to erupt, and not knowing when it will stop, what measures do the emergency responders and islanders need to put into place to ensure their safety?

VCOP ACTIVITY
Describe it
Read the article and make a list of five nouns that you come across. Then describe those five nouns with five adjectives.