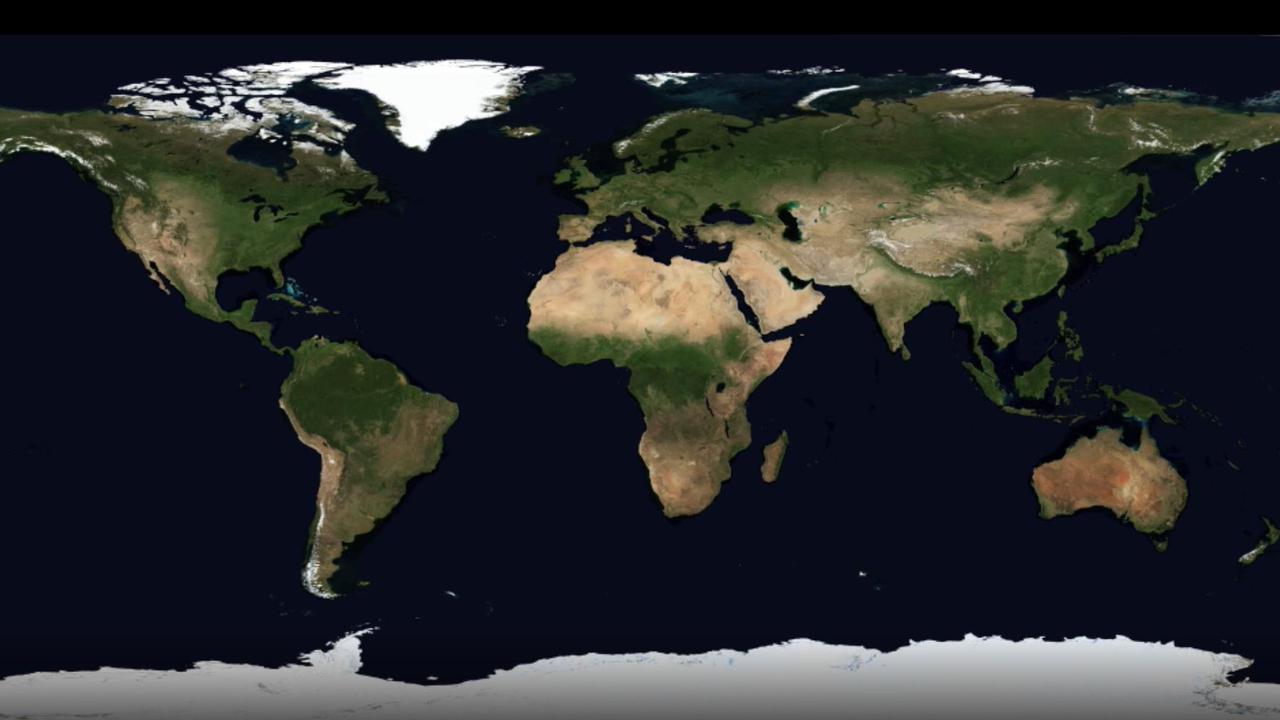 The animation begins by showing the oceans as they are now. Picture: Horace Mitchell/NASA

An amazing animation shows what Earth would look like if we drained its oceans.

Crafted by NASA, it provides a glimpse* of vast* lands on the outer edges of current land areas that were lost to the sea as recently as 12,000 years ago.

“Three fifths of the Earth’s surface is under the ocean, and the ocean floor is as rich in detail as the land surface with which we are familiar,” NASA said.

“This animation simulates* a drop in sea level that gradually reveals this detail.”

The video begins with a map of Earth showing its continents as we know them today.

With each passing second, the sea level drops by tens of metres to reveal the hidden prehistoric lands of our planet.

First to pop up are the continental shelves – large slabs around a continent’s edge that are submerged* under relatively shallow waters.

Two of the first to appear as the animation takes us back through time connects mainland Australia with Tasmania to the south and New Guinea to the north.

Another land bridge, known as Doggerland, is between the UK and Europe. It is thought to have been slowly submerged by water between 18,000BC and 5,500BC.

Also known as “Britain’s Atlantis*”, it was an inhabited landscape stretching from Scotland to Denmark and down the English Channel.

Most of the tens of thousands of prehistoric people who lived there are thought to have been killed by a tsunami 8200 years ago. 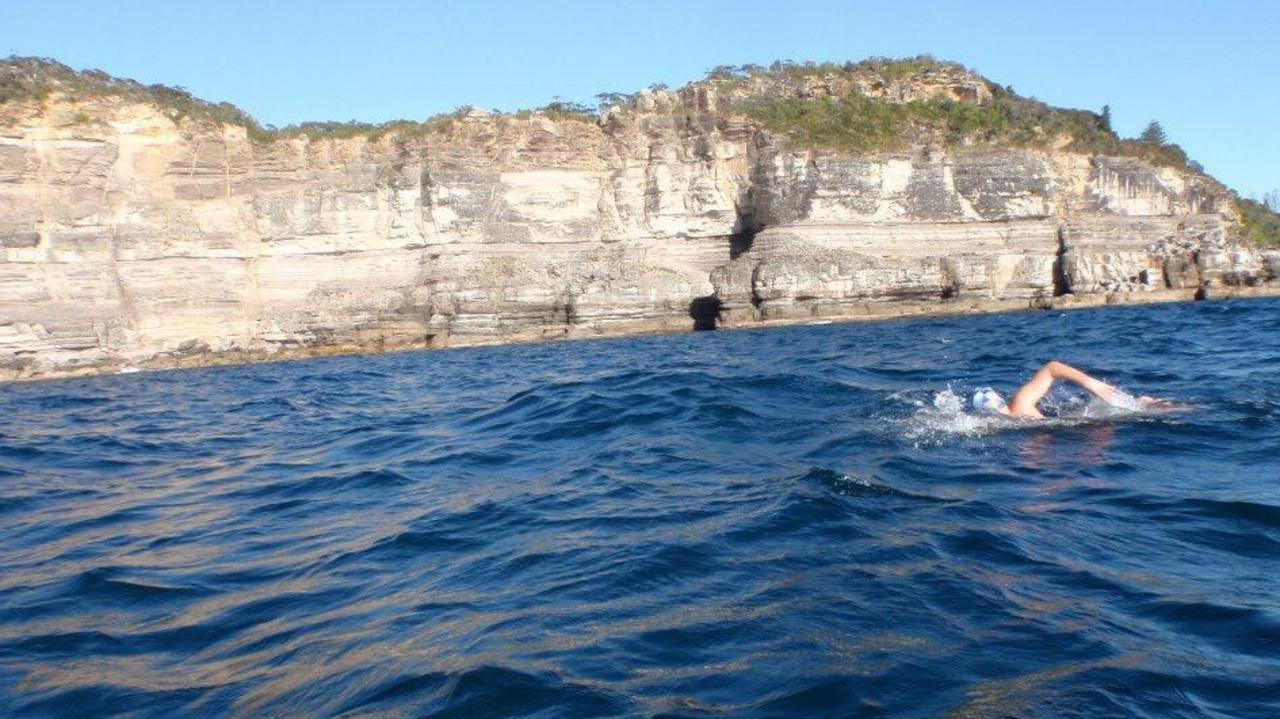 Queensland athlete Tara Diversi during one of her two swims across the English Channel. In ancient times, this 34-240km strait between UK and Europe was an inhabited landscape. Picture: supplied

It’s thought that a continental shelf between Alaska and Russia, known today as the Bering Strait, allowed early humans to cross to the Americas from East Asia during the last Ice Age.

“As the sea level drops, the continental shelves appear immediately,” NASA said of its video, which was first published in 2008.

“They are mostly visible by a depth of 140m, except for the Arctic and Antarctic regions, where the shelves are deeper.”

By 6000m, most of the ocean is drained except for the deep ocean trenches.

These are among the most poorly studied regions on Earth, with many still unexplored by humans.

The deepest ocean trench is the Pacific Ocean’s Mariana Trench at a depth of 11,034m.

This article was first published in The Sun and is republished here with permission. 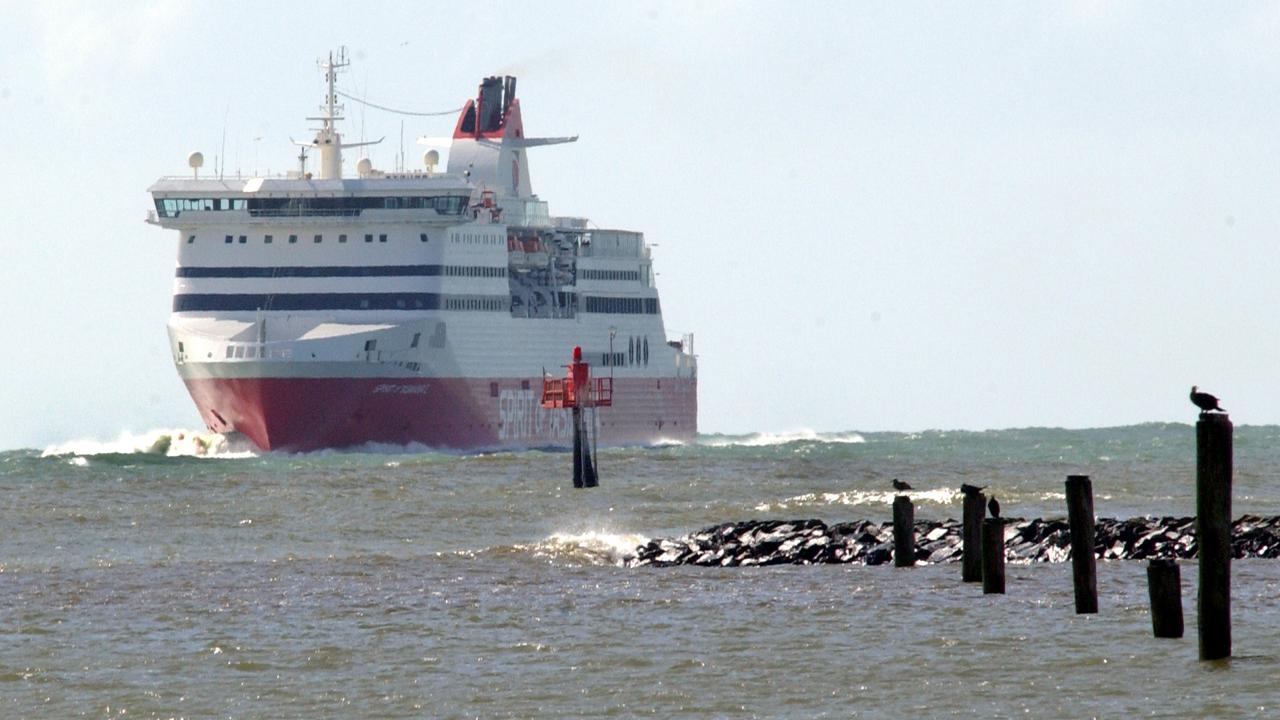 Bass Strait ferry Spirit of Tasmania One arrives at Devonport, Tasmania from Port Melbourne, Victoria. Thousands of years ago, people and wildlife walked the land bridge now covered in water.

CLASSROOM ACTIVITIES
1. Drained oceans
Divide a page into a chart with four boxes and complete the chart recording your thoughts and reactions as you watch this NASA produced animation on what the Earth would look like if the oceans were drained.

Label the four boxes as:

Observations – what do you notice?

Ocean depths – what happens as the deeper oceans disappear?

What do you notice about the Earth’s topography (study of the shape and features of land surfaces)?

What do you find interesting? What questions do you have?

2. Extension
What lies beneath these oceans “are among the most poorly studied regions on Earth”. Why do you think this is so? What important historical information could be found by exploring the ocean’s floors?

HAVE YOUR SAY: Where would you like to walk to if you could drain the ocean?
No one-word answers. Use full sentences to explain your thinking. No comments will be published until approved by editors.