A man waves the Egyptian flag after the container ship Ever Given is fully dislodged from the banks of the Suez Canal. Picture: Suez Canal Authority/AFP

The cargo ship – named the Ever Given – had gone off course and lodged* itself in the side of the canal.

The salvage* team was glad of this week’s full moon, because water levels rose about 32 centimetres higher than normal. The higher tide made it easier to free the vessel – measuring nearly 400 metres long – without losing all or part of its load of around 18,000 containers.

The engineers had to work fast to make the most of this small window. The tidal effect lasts only a few days and it was the best chance of unblocking the canal and saving billions of dollars’ worth of global trade. Tides are higher whenever there is a full or new moon, which is when the moon directly aligns with the sun, with either the Earth or moon in the middle position. This alignment causes a bigger gravitational* pull on both sides of the Earth. As a result, high tides are higher and low tides are lower. They are known as spring tides and occur twice a month.

This effect was boosted by the first supermoon of the year, caused by the full moon coinciding* with the closest point to Earth in its elliptical orbit*. Supermoons happen a few times a year. This one is called the worm moon, for the earthworms that start appearing in Northern Hemisphere soil at this time of year.

When it became clear that tugboats alone could not free the Ever Given, the rescue effort turned to the supermoon’s pull on the tides and how it might help.

“In the last couple of days, all the available tug power has been allocated,” said Lars Mikael Jensen, head of Maersk Line’s global ocean network.

Seven days after a spring tide, the sun and moon are at right angles to each other in relation to the Earth. 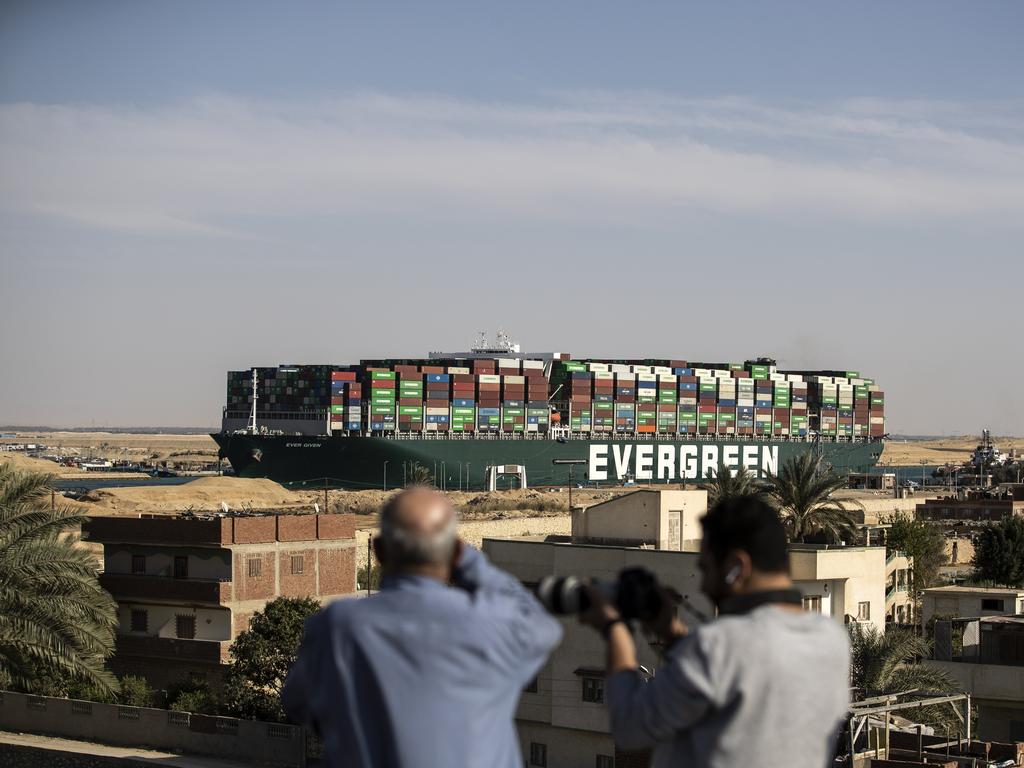 People watch as the container ship Ever Given is refloated, unblocking the Suez Canal. Picture: Mahmoud Khaled/Getty Images

Once the bulge in the ocean caused by the gravitational pull of the sun partly cancels out the influence of the moon, tides become lower. It would take a lot longer to pull loose the Ever Given in lower tides, salvage experts said.

After several attempts failed to free the ship, Osama Rabie, chairman of the Suez Canal authority, sent dredgers to dig out sand from around the vessel and help tugboats move it a little bit further out each day at high tide.

By Friday, the authority had removed roughly the equivalent of seven Olympic-sized swimming pools of sand and mud using dredgers and diggers.

The image of a one digger attempting to free the massive carrier went viral on the internet. It became an instant symbol of facing other big challenges like COVID-19 and climate change.

And they did not give up.

On Saturday, the team used 12 tugboats to try to dislodge the Ever Given: two at the front, six pushing the back and four pulling the stern*. A tugboat pulls the Ever Given container ship after it was dislodged from the banks of the Suez Canal. Picture: Suez Canal Authority/AFP

“We were working four days with our tugs,” said Captain Wessam Hafez, a veteran* chief pilot on the canal. “When this big (Dutch) tug came, immediately the stern of the ship was released from the bank.”

By Sunday night, the supermoon had caused tidal levels to exceed two metres – nearly 50 centimetres above the March 23 high tide when the ship ran aground. The salvage team’s best chance of success had arrived.

By dawn the ship slowly began to break clear.

By Monday afternoon local time, the ship gently drifted toward the centre of the canal, helped by an array of tugboats.

Origami-inspired home for life on the moon

CLASSROOM ACTIVITIES
1. Rescue Diagram
Use the information from the Kids News article to create a diagram (a simplified drawing showing the appearance, structure, or workings of something) of how the tides work to help free the stranded cargo ship. A diagram should have arrows and short headings/descriptions to explain how the sun and moon affect the tides and how that affected the rescue operation.

Make your diagram as clear and simple to read as possible.

Once completed, compare with a friend.

2. Extension
If the rescue operation had to wait weeks or a month for the next full moon high tide, how else could they have tried to free the stranded cargo ship blocking a very important canal?

What are the effects of a ship blocking the Suez Canal which is a major thoroughfare for cargo ships carrying thousands of containers of goods to different countries?

VCOP ACTIVITY
A summary is a brief statement of the main points of something. It does not usually include extra detail or elaborate on the main points.