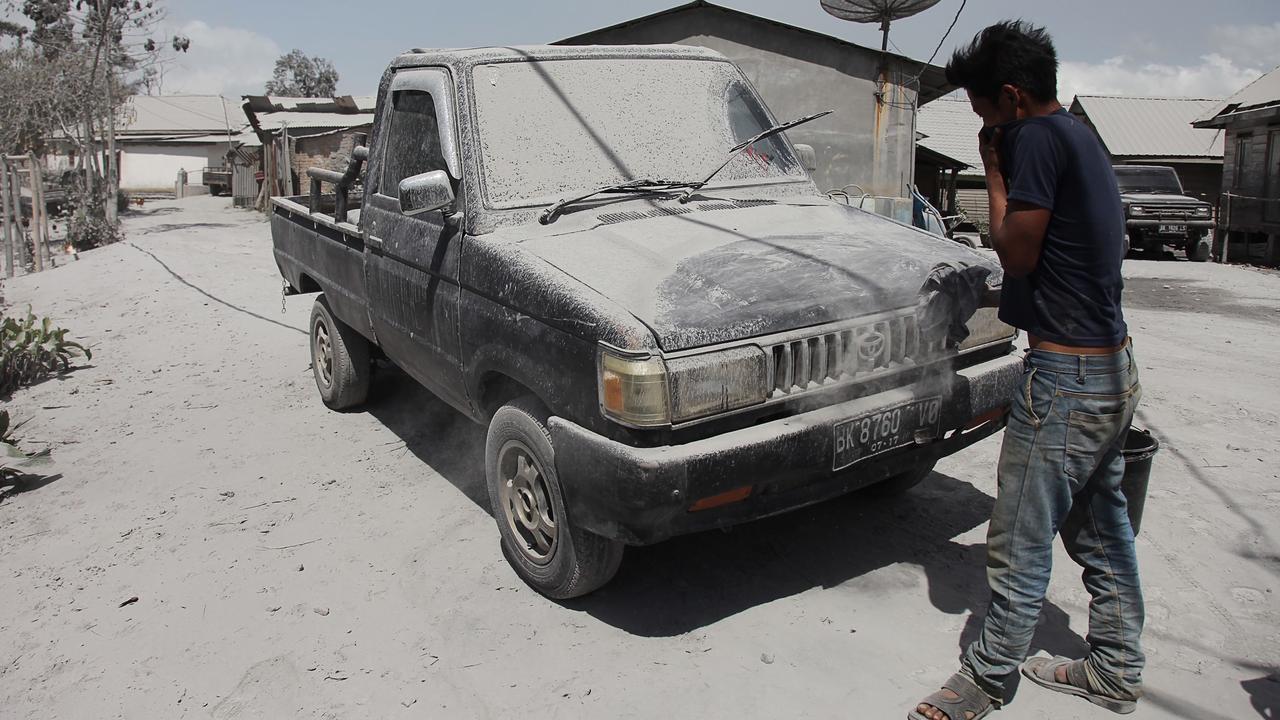 A man cleans a car covered with ash following an eruption by Mount Sinabung at the Sukatepu village in Karo, North Sumatra, Indonesia on August 10. Picture: AFP

Indonesia’s rumbling Mount Sinabung erupted on Monday, sending a column of volcanic materials as high as 5km into the sky and depositing ash on villages.

Falling grit and ash settled up to 5cm deep in already abandoned villages on Mount Sinabung’s slopes, said Armen Putra, an official at the Sinabung monitoring post on Sumatra Island.

At Berastagi, a city in North Sumatra province, about 20km from the crater, drivers switched on car headlights in daylight to see through the ash. Farmers work on their farm covered with ash from Mount Sinabung at the Sukatepu village in Karo, North Sumatra, Indonesia on August 10. Picture: AFP

There were no deaths or injuries from the eruption, Indonesia’s Volcanology and Geological Hazard Mitigation* Center said.

The Center advised people to stay 5km from the crater’s mouth, and should be aware of the danger of lava. Air travel was not being impacted so far by the ash, the Transport Ministry said. Around 30,000 people have been forced to leave homes around Sinabung in the past few years.

Mount Sinabung is among more than 120 active volcanoes in Indonesia. 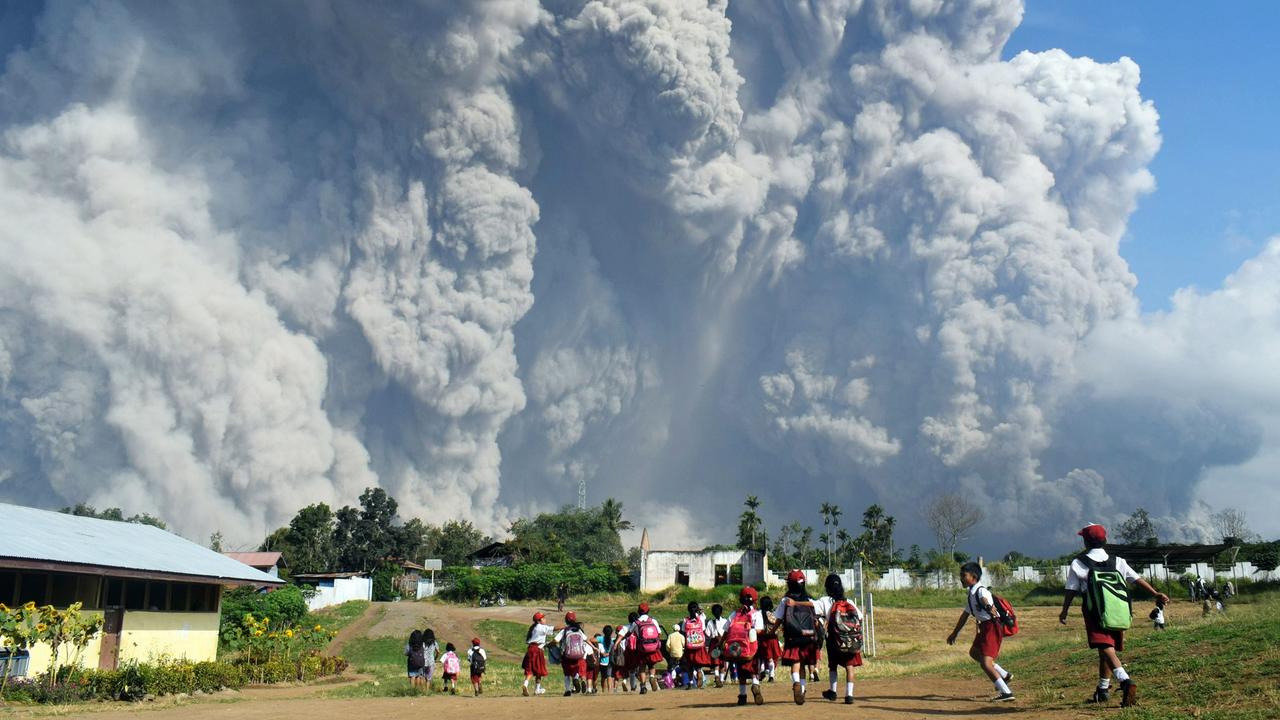 RING OF FIRE
The Pacific Ring of Fire is also known as the Circum-Pacific Belt.

It traces a line of the meeting points of many of Earth’s tectonic plates*, including Australian, Antarctic, Eurasian, North American, Juan de Fuca, Cocos, Caribbean, Nazca, Indian, Philippine, and smaller plates. These all encircle the big Pacific Plate.

These tectonic plates are constantly moving: bumping into or sliding above or below each other, creating fault lines in the Earth. This causes volcanoes, earthquakes and deep ocean trenches.

One of these ocean trenches is the Mariana Trench, 11,034m deep and the deepest point on Earth. If you put Mount Everest at the bottom of the trench, the summit would be 2133m below sea level.

About 90 per cent of the world’s earthquakes occur along the Ring of Fire, including the Valdivia Earthquake in 1960 in Chile. At 9.5 out of 10 on the Richter scale*, this is the strongest earthquake ever recorded.

Mount Tambora, Indonesia, erupted in 1815, also along the Ring of Fire and is the largest volcanic eruption in recorded history.

Australia is not located on the Ring of Fire. It skirts around to the north (including Indonesia and Papua New Guinea) and east (including New Zealand) of Australia.

What is at the centre of Earth?

Why do volcanoes take so long to erupt?

Present your Cinquain poem artistically on poster paper or using a computer program.

2. Extension
If you were to build a house in the vicinity of any of these volcanoes, what things would you have to consider before building and living there?

HAVE YOUR SAY: What in this story would you like to learn more about?
No one-word answers. Use full sentences to explain your thinking. No comments will be published until approved by editors.