World map of names shows lots of Smiths in Australia Part of the world map of most common last names by country. Picture: Net Credit

A fascinating new map has plotted out the most common surnames in every country in the world.

The map also highlights the origins of different names, providing insights into the histories and cultures of different societies.

The most common name in Australia is Smith, and the same is true in the US, Canada, UK and New Zealand. The most common last names across Oceania, which includes Australia. Picture: Net Credit

Smith is derived* from the Anglo-Saxon word smitan, which means “to strike”, and became the name for a man who worked with metal.

The fact that blacksmiths existed in most countries means versions of the name Smith are common around the world, but particularly in English-speaking former territories of the British Empire. The most common last name by country. Yellow indicates the name is occupational in origin, red is patronomyic or from the father, aqua/green is from a personal characteristic, pink is a place name and blue is a name honouring a patron. These origins are explained below under HOW NAMES BEGIN. Picture: Net Credit

In Ireland, the most common surname is Murphy, while in France it’s Martin, and in Spain it’s Garcia.

In Sweden it’s Andersson, in Italy it’s Rossi, and in Poland it’s Nowak.

The most common name in China is Wang, while in India it’s Devi and in Mongolia it’s Ganbold.

Gonzalez tops the list in four South American countries – Chile, Argentina, Venezuela, and Paraguay – while Rodriguez does it in Uruguay and Colombia.

The origins of the name Gonzalez can be traced back to the medieval Germanic* name for war. The most common surnames are far more varied across Africa.

In Egypt it’s Mohamed, in the Congo it’s Ilunga, and in South Africa its Nkosi, while in Sierra Leone it’s Kamara, Ethiopia it’s Tesfaye, and in Angola it’s Manuel

The map was created by online lending company NetCredit. 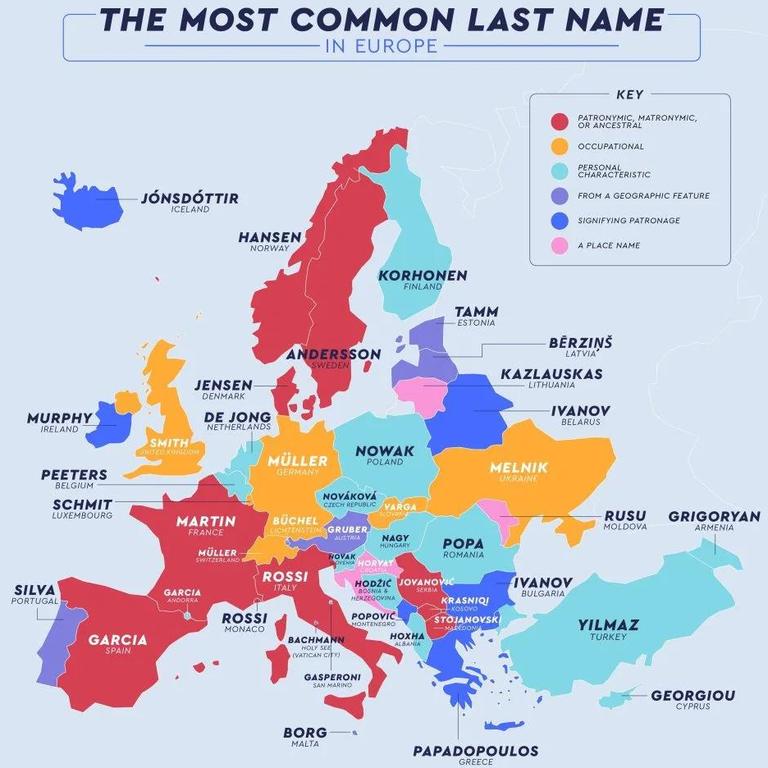 HOW NAMES BEGIN
The map also plots out the origins of the names.

Patronymic names are derived from a father’s first name, like Johnson or Jones, which both mean “John’s son”.

Some names honoured a patron*, like Kilpatrick, which means “follower of Patrick”.

The Slavic ‘-ov’ means ‘the son of’ and is similar to the suffix ‘-en’ on the end of ‘Jensen’ or ‘Hansen’ in Scandinavia.

Some people were named for a place or geographical features.

Others describe a person’s characteristics. For instance, ‘Bērziņš’, the most used Latvian family name, originates from the word for ‘birch’, which would signify someone who lived among birch trees.

In Austria Gruber is the most common surname and evolved from the Middle High German* word for ‘pit’.

Many people were named after their occupation, hence the names Smith, Miller, and Taylor.

In the world overall, China and India’s most popular names took first and second place.

This article was originally published in the The Sun and is republished here with permission. Aussie accents on the move

Hobart could be known as Nipaluna

CLASSROOM ACTIVITIES
1. Create a Pie Chart
Look carefully at the maps in today’s story. Each map has the different categories of where the names came from. For each map, write the number of names in each category. Then, create a pie chart or graph, using the numbers. What do your graphs tell you about the history of names?

2. Extension
It was a perfectly normal day. Except for one thing. Everyone had forgotten their name. In fact, all names had completely disappeared.

Write the story of what happens next.

VCOP ACTIVITY
Proper Noun Police
A proper noun is a noun that names a particular person, place or thing. Is always has a capital letter.

HAVE YOUR SAY: Is your name common where you live? Would you prefer a common or uncommon name?
No one-word answers. Use full sentences to explain your thinking. No comments will be published until approved by editors.