Steam power, Crystal Palace, war and adventure: the world in the 1850s A painting of Queen Victoria and her husband Prince Albert in the 1800s. Picture: The Royal Collection at Windsor

The beginning of the Australian Gold Rush in 1851 was a time of huge change around the world.

There were wars and revolutions*, amazing inventions and mass migration* as people travelled around the world to seek a better life. – A civil war* in China called the Taiping Rebellion changed China forever and was a time of upheaval* and danger. It went from 1850 to 1864 and was a fight between old traditions and religions and people who wanted China to become a Christian country.

– The Public Libraries Act was passed by British parliament in 1850, giving many British people the chance to read books and learn about the rest of the world for the first time.

– Steam was beginning to be used to power ships rather than just sails and the wind, making travel times to far-off lands faster and more predictable*. A drawing of the steam ship SS Admella, which was typical of steamships of the 1850s. It was wrecked off the coast of South Australia on August 6, 1859.

– The Great Exhibition took place in London in 1851 to show off the world’s new inventions (including the first public toilets) and other mass-produced* things made possible by the industrial revolution*. It was held in the extraordinary Crystal Palace and six million people visited. A drawing of the Crystal Palace, London, UK, which was built for The Great Exhibition in 1851.

– At New York’s World Fair in 1854, Elisha Graves Otis showed off his new invention, the safety elevator, with a brake to stop the lift falling if it fails. Tall buildings instantly became more practical.

– Many people became sick and died in London in 1854 from an outbreak of cholera* and John Snow discovered it was passed through the water supply.

– The Crimean War was fought between many European countries from 1853 to 1856. Victorian volunteers in the Crimean War.

– Rabbits were brought to Australia in 1859 to provide meat and later for hunting. They multiplied quickly to plague* proportions*, which led to environmental disaster. 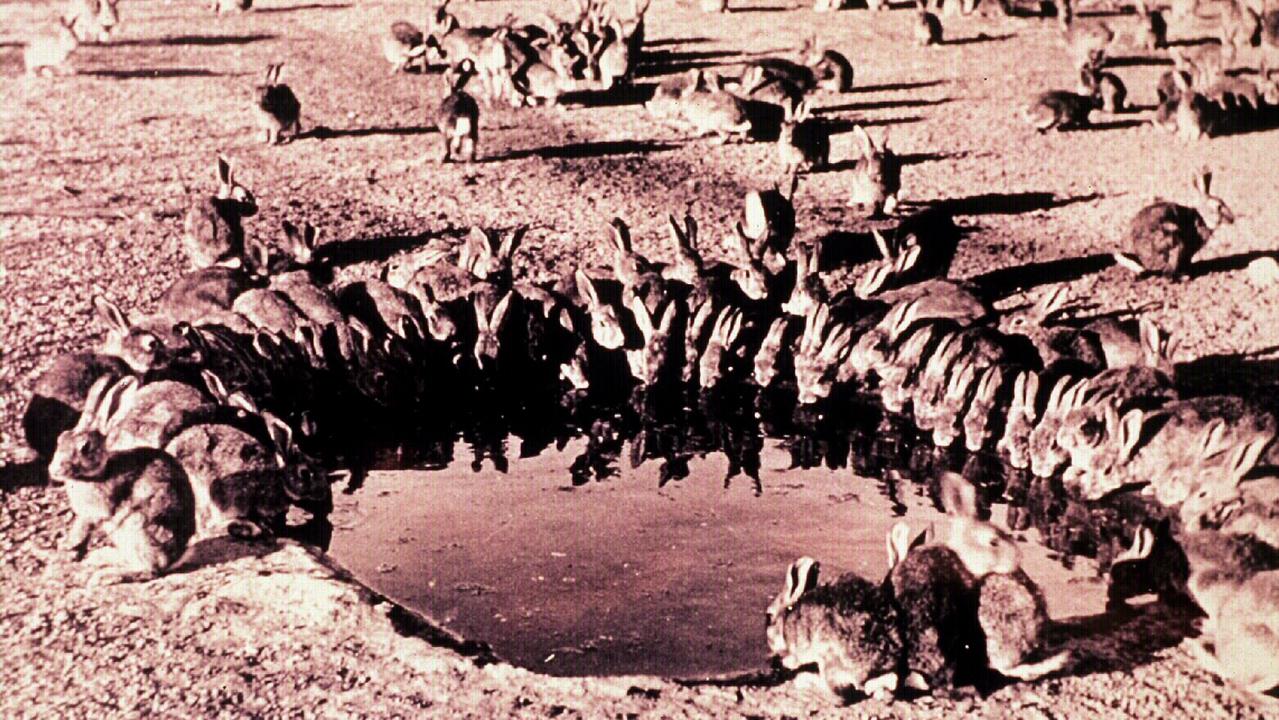 Rabbits at a watering hole in South Australia during the 1935 rabbit plague.

– Australia’s population grew quickly during the Gold Rush, which meant Australian farmers had a growing market within Australia for food and wool. Crop farming of wheat and other grains became much more efficient with the Australian invention of the mechanical harvester called Ridley’s Stripper. – Charles Darwin published his book On the Origin of the Species, which explained his theory of evolution*.

– In the 1850s, people spent their spare time in dance halls, theatres and at the horse races.