As Victoria marked 200 days of lockdowns this week, Victorian Premier Dan Andrews took restrictions on movement across Melbourne to a new level with the introduction of a night time curfew* and the closing of all children’s public playgrounds.

The Delta variant of the coronavirus has seen transmission rates increase. NSW has hundreds of new infections a day, with its version of lockdown not appearing to reduce numbers as quickly as the state would like.

So Premier Dan has gone harder and faster! His line is he doesn’t want Victoria to end up like NSW!

Victorians had these restrictions last year in the darkest period of the 2020 second wave, but to see them return in 2021 after 200 days of lockdowns was hard for some families to take. People and health professionals are now starting to talk about the mental health effects of all these lockdowns.

Our health experts have to balance controlling the spread of the virus with the effects of harsh lockdowns on people’s mental wellbeing. 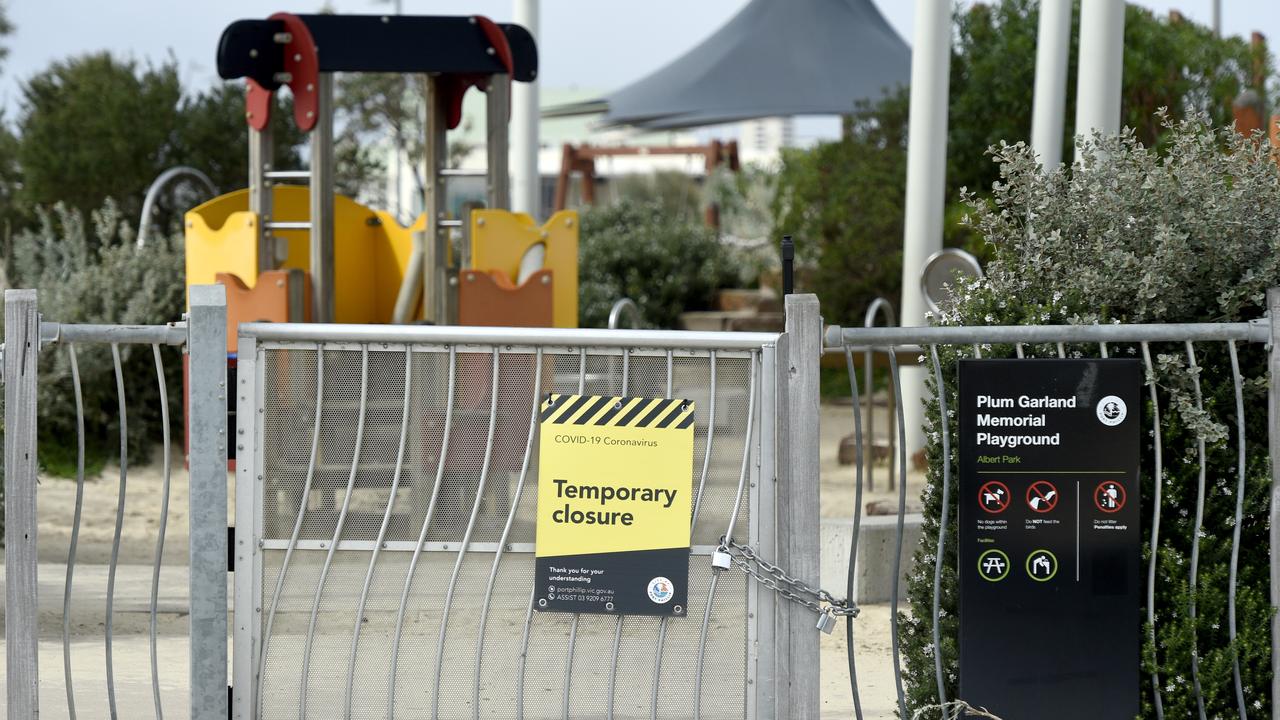 Playgrounds around Melbourne, including the Plum Garland Memorial Playground at Albert Park, were closed under harsh restrictions to stop the spread of Covid-19. Picture: Andrew Henshaw

As school students, you have endured* two years of interrupted and remote learning. I imagine you are all feeling the strain of it at times! Hang in there, it’s not forever!

Everyone was talking about the playground closures, so I thought it would be a good topic for a cartoon. I could see both sides of the health argument, but something inside me felt that closing down playgrounds was perhaps a step too far.

I started sketching a playground I used to take my three children to when they were young. It had a huge space rocket in the centre that you could climb up the inside of. We had some great times and adventures on that rocket. I recalled those times as I drew the rocket park. Some health experts and families are worried about the mental health effects of closing playgrounds. Picture: David Caird

As I drew, the police union boss came out and said that police were not happy with having to patrol closed playgrounds and move along parents and their children. Or even worse, fine kids for playing on climbing castles!

So I decided that the police had to be in the cartoon. But instead of drawing a police officer, I would put the Premier in a police uniform. It was his order, so he should carry it out, seeing that the state’s police officers were reportedly reluctant to do so.

I drew the Premier standing and pointing up at two kids who were happily playing on the rocket. He has a megaphone in his hand ready to order them to come down.

This image painted a picture of the harshness of the lockdown, but I felt it needed a few tweaks*. And it came from something my own kids said to me at that rocket park many years ago.

When it was time to leave the park I would have to round up the children. “Cant we stay longer, Dad?”, they would say. “No, we have to get home and prepare for dinner and school tomorrow”, I’d say. They would look at me with a scowl* and say “You’re the Fun Police, Dad!”

So many years later Dan Andrews is standing in my cartoon wearing his police uniform with “Fun Police” written on the back. On his shoulder the Victoria Police badge is replaced with a not-so-smiley face.

While we all understand the importance of lockdowns and listening to and accepting the advice of health professionals in order to control and ultimately rid ourselves of Covid, my cartoon reflects the human emotions, feelings and effects of forced lockdowns on people and their children.

Vic and NSW lockdown styles in the spotlight

CLASSROOM ACTIVITIES
1. Caption it!
Cartoonist Mark Knight has not used a caption on this cartoon, letting the imagery speak for itself.

Using your sentences to help you, write a caption for the cartoon or some thought bubbles or quotes from one of the people in the cartoon that will make Mark’s meaning clearer for those who haven’t been reading the news this week.