Bold plan to bring woolly mammoths back to life 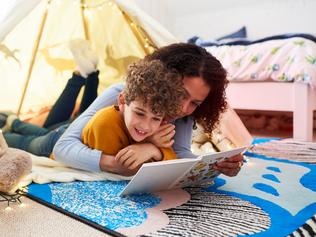 What stories really matter to you? 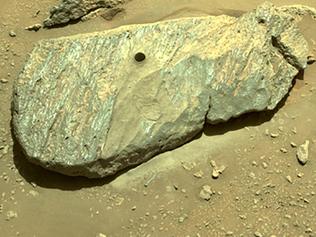 NASA’s Mars rover Perseverance has successfully collected a rock sample from the Red Planet, while China follows up its own Mars mission with a new prototype

The hunt begins for sunken ships

The 43-million-year-old fossil of a fierce, four-legged whale species has been named after the ancient Egyptian god of death

Heritage is more than just buildings and other things we can see from the past, with a local council recognising the heritage value of the smell of Vegemite being made at an old Kraft factory

Weird creatures that could be state’s official fossil

Some states are adopting official fossils to join their traditional animal and flora emblems. See what relics are in the running to become the official fossil of Victoria

Chinese giant panda Kai Kai has become a mum in Singapore after a seven year effort, giving birth to the country’s first ever cub

Parents are worried the shift to a cashless society means teens aren't learning the value of money. How smart are you with money?

A woolly mammoth’s life and travels 17,000 years ago have been detailed for the first time after a study of one of its well preserved tusks. Welcome to Science Week!

After an epic journey followed by millions of fans around the world, China’s weary herd of wandering elephants is homeward bound ahead of World Elephant Day

What is the Census all about?

The story of our nation is updated every five years at Census time – and what a strange chapter this one promises to be as people around Australia continue to live, work and learn through Covid

How Pluto lost its place as a planet

It has been 15 years since Pluto was demoted to dwarf planet status, but some of us who grew up counting nine planets in our solar system are having a hard time letting go

Wiradjuri girl Penelope Towney is just seven-years-old, but the Year 2 student from the Illawarra region of NSW has already made a short film celebrating her family’s country and culture

Smelly theory behind the origin of Earth’s oxygen

A new study suggests that as our planet slowed and daylight grew longer, one very smelly bacteria soaked up the light and started producing the oxygen needed for life on Earth

Buried beneath 5m of clay, archaeologists have made the incredible discovery of a 2200-year-old Egyptian shipwreck

How to kick off the Covid blues

Evidence of regrowth on the Great Barrier Reef

The Great Barrier Reef has gone through an important period of recovery, spared the impact of heatwaves and tropical cyclones over the past year

Big Ronny the scrub python is in lockdown in Sydney, but the whopper reptile will ‘shake it off’ by shedding his skin just in time for World Snake Day

A mint condition copy of Super Mario 64 has sold for a super price, with a mystery bidder breaking the previous record to claim the game at a US auction

The human species’ family tree has sprouted a new branch, with the discovery in China of the ‘Dragon Man’, thought by experts to be a nearer relative to Homo sapiens than Neanderthals

How do astronauts clean clothes in space?

Not even astronauts can avoid the housework forever, as NASA announces plans for a dirty laundry overhaul aboard the International Space Station

From laps in dam to Paralympic dream

Year 7 students in SA have begun testing robotic rubbish collectors in the school pool, with their sights set on one day cleaning up waste-filled water worldwide

Wasabi the Pekingese is one hot hound, beating 2500 other pooches to the top prize: best in show at the world-famous Westminster Kennel Club dog show in the US

After more than a year on the move, the antics of a Chinese herd of elephants are proving irresistible to social and world media

For the third year in a row in France, and 13th time in his career, Aussie wheelchair tennis ace Dylan Alcott is a Grand Slam champion

What is longer than a basketball court and taller than a B-double truck? Australia’s newest and biggest dino, Australotitan cooperensis, nicknamed Cooper

Radioactive rhino horns to the rescue?

Teen climate warriors have their day in court

Aussie teenage climate activists have lost their court bid to stop a NSW mine expansion, but ‘duty of care’ ruling declared a win

How to make a pen pal with purpose

Eight years after the first of its fossilised remains were found in Mexico, palaeontologists confirm a new species of crested dinosaur

The Aussie landmark coins to flip over

Australia Post’s new collectable coins feature some of Australia’s best loved landmarks. Find out which ones made the Great Aussie Coin Hunt along with some cool facts about the icons

We all know bees make honey, but their importance in Australia extends far beyond producing a beloved breakfast spread

Queenslander Dexter Kruger has set a new record as Australia’s oldest ever man, notching up 111 years and 124 days and showing no signs of slowing down

Living with chronic pain from childhood has inspired one South Australian man’s world record bid for the longest abdominal plank.

NASA’s Parker Solar Probe has broken its own record as the fastest man-made object in history as its speed brings it closer and closer to the Sun.

Nepalese Sherpa Kami Rita has set a new record for the most Everest ascents, reaching the summit of the world’s highest peak for the 25th time

The Great Aussie Coin Hunt is back at Australia Post, with the new A-Z of $1 collectable coins from the Royal Australian Mint full of fun and surprises

Two years after its first flight, the gigantic Stratolaunch aircraft took to the skies for a second time above the Mojave Desert in the US.

With only an estimated 80 Sumatran rhinos left in the wild, the results of a new study deliver welcome hope for the survival of the species.

Visitors to see Colosseum as gladiators saw it

Rome’s famous Colosseum will soon have a floor again, allowing the 7.6 million people who visit each year to stand where gladiators stood before they went into battle 2000 years ago

US astronaut Michael Collins, who piloted the Apollo 11 command module while Neil Armstrong and Buzz Aldrin became the first people to walk on the Moon, has died aged 90

Billions of T-rex roamed the Earth

If it scares you to think about one bus-sized T-rex rampaging across the land, what about 2.5 billion of them? New tyrannosaur research has suggested there were 20,000 alive at a time during their reign

What does Anzac Day mean?

Each year on April 25 we commemorate Anzac Day. Kids News explains how the day began, what it means and how it will be observed this year as we continue to live with COVID-19

Aboriginal people in north Australia were making sharp tools from kangaroo leg bones as far back as 46,000 years ago, based on dating of bone tools found in limestone caves in WA

NASA’s experimental helicopter Ingenuity rose into the thin air above the dusty red surface of Mars on Monday, achieving the first powered flight by an aircraft on another planet

Our women cricketers have achieved a level of excellence that places them at least alongside famous sporting teams such as the Invincibles. But are they the best of the best?

Australia was once home to the world’s biggest-ever bird, which weighed as much as a cow. Scientists have called Dromornis stirtoni an “extreme evolutionary experiment”

Anzac Day marches get the green light from PM

Prime Minister Scott Morrison says if Australians can gather to party and protest, they should also come together on Anzac Day to remember and respect our veterans

Indonesia’s komodo, the largest living lizard still on Earth, likely originated in Australia millions of years ago from a mix of parents, according to new research

A 2000-year-old ceremonial carriage made of iron, bronze and tin has been unearthed from the outskirts of Pompeii, the city buried in the volcanic eruption of Mount Vesuvius in 79AD

Australia’s oldest painting has been identified as a kangaroo-like image created more than 17,000 years ago in the Kimberley region of WA, a big step forward in creating an accurate art timeline

Australia’s ‘word of the decade’ revealed

A phrase that was widely used in 2016 when Donald Trump first became US President has been crowned the “word of the decade”, outperforming “Karen”, the people’s choice winner last year

Captain Sir Tom Moore, the UK World War II veteran who walked up and down his garden to raise money for health care workers, has died after testing positive for COVID-19. He was 100

It has been a year dominated by crises, from bushfires to coronavirus, yet neither were the most Google-searched terms in Australia. Instead, ‘US election’ was the most searched-for term

Triceratops coming to live in Australia

A very special dinosaur that roamed Earth 67 million years ago is moving to Melbourne. The one-tonne triceratops skeleton has been described as one of the most complete dinosaur fossils ever found

An Australian geologist is working to uncover the fossilised scene of a T-rex and a triceratops apparently locked in a ferocious duel, the teeth of the T-rex embedded in the other’s spine

Scientists and historians will use AI to study and recreate what the world smelled like hundreds of years ago. Called Odeuropa, the pioneering study will build an online smell encyclopaedia

Writing We Are Wolves left Katrina Nannestad in tears at times but also made her happy. We know this thanks to some great questions from Kids News readers. Check out Katrina’s answers to the top 10 questions here

Solving the mystery of the Bermuda Triangle

Ships and planes have disappeared without a trace in the Bermuda Triangle. But is there really anything strange going on? Kids News looks at the history of this fascinating phenomenon

Huge find in Egypt’s ‘City of the Dead’

Archaeologists have unearthed 100 Ancient Egyptian painted coffins — some with mummies inside — plus 40 precious statues at the Saqqara necropolis near Cairo, Egypt

Australia’s indigenous culture will be celebrated when the men’s cricket team takes to the field in the coming T20 series. Discover what the design represents

Australian researchers have found the skull of a big-toothed, small-brained ‘cousin’ of our species called Paranthropus robustus, which could help us understand human evolution

You can now explore the wreckage of the famous Titanic ship on a submarine tour, helping experts survey the site. The eight-day trip departing from Canada will set you back $175,000

A huge cat carving has been unearthed on a hillside in southern Peru and is thought to be a 2000-year-old Nazca Line. Around 1000 have already been discovered

An incredibly rare, 2000-year-old Roman coin commemorating the death of Julius Caesar – just one of three in the world made of gold — is up for sale by a private collector

Discover some fun facts about important moments in history with book characters Tina, Tom and Dog — and download their A-maze-ing activity sheets

Archaeologists in Egypt have discovered 27 unopened, ancient coffins ornately painted and covered in hieroglyphs near one of the world’s oldest pyramids

UPDATED Stan weighed more than 6 tonnes and had eyes the size of baseballs. His bite could have crushed a car. And this famous Tyrannosaurus rex has been sold for more than $44 million

How Australia’s money has changed

From “holey dollars” and handwritten banknotes, Australia’s money has seen some big changes. With more people going digital, could the next step be the end of cash?

How cold was it in the coldest part of the Ice Age?

Scientists have calculated just how cold it got on Earth during the coldest part of the last Ice Age, using ocean plankton fossils and climate models