One of the discovered mummies.

Egypt’s Antiquities Ministry said the mummies, dating back to the Late Period (664-332 BC), are covered in a layer of painted material known as cartonnage, which is made up of tightly fitting layers of linen glued together.

According to the ministry, the linen has been constructed* in the form of a human, suggesting there are mummified* human remains inside. 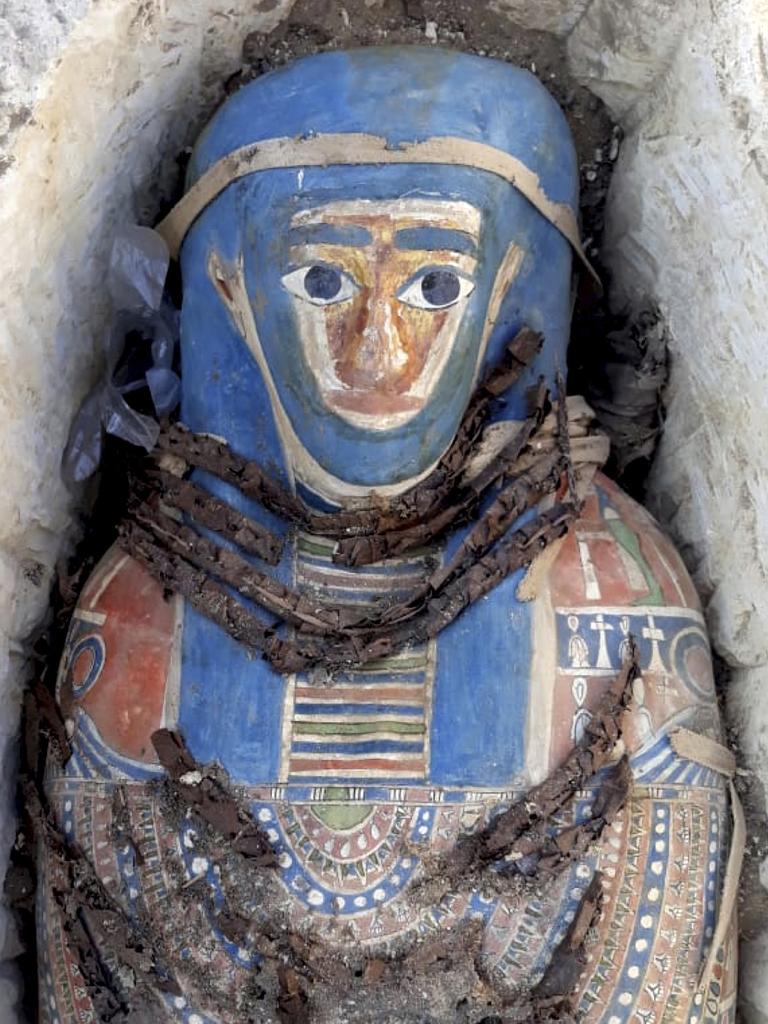 One of the ancient mummies covered with a layer of painted cartonnage. Picture: Egyptian Ministry of Antiquities via AP The painted mummy was found inside a sarcophagus in an area of King Amenemhat II’s pyramid. Picture: Egyptian Ministry of Antiquities via AP

Secretary-general of Egypt’s Supreme Council of Antiquities Doctor Mostafa Waziri explained that three of the mummies are in particularly “good condition”.

He said the mission at a site 40km south of Cairo began digging in August and the mummies were found in an area of King Amenemhat II’s pyramid, located in the Dahshur royal necropolis*.

The necropolis was the burial site for courtiers (royal assistants or advisers) and high-ranking officials.

This area is home to what is considered to be some of the earliest pyramids in history, including Sneferu’s Bent Pyramid and the Red Pyramid.

The coffins are now being sent for restoration work.

Egypt continues to unearth fresh details of its rich history so we can learn more about its ancient way of life.

Archaeologists recently uncovered a “massive” building that was once part of Egypt’s ancient capital city. Researchers recently discovered a broken jar containing what appeared to be a chunk of 3300-year-old cheese. Picture: Courtesy of Enrico Greco, University of Catania, Italy

A stunning sphinx statue was also found at a temple in southern Egypt.

In a separate project earlier this month, experts discovered the mummy of a woman named Pouyouor Pouya in a sarcophagus in Luxor, in southern Egypt.

She is believed to have lived during the 18th Dynasty*.

During the same dig, another tomb nearby revealed a number of mummies in sarcophagi, according to website LiveScience.

One sarcophagus was covered in hieroglyphics* referring to the goddess Mut.

Archaeological digs don’t just uncover the remains of pharaohs* or courtiers however, they also unearth unusual items from Egyptian life.

Experts recently found the oldest solid cheese in the tomb of Ptahmes, mayor of the ancient city of Memphis.

A 2200-year-old gold coin, depicting an ancestor of the famous queen Cleopatra, was also unearthed.

HOW ARE MUMMIES MADE?

Mummification of humans was performed by special priests. All the internal organs were removed from the dead body except the heart because the ancient Egyptians believed that heart is where the soul lives.

The body was then filled with chemicals and spices to prevent bacteria and the body was covered in salt and left to become dry. After 40 days, the priests would wrap the body in linen bandages while chanting spells. After mummification, a mask was placed over the head so it could be recognised in the afterlife*.

There are thousands of mummies in Egypt. One of the most famous mummies is that of King Tutankhamun or King Tut, which is 30,000 years old.

This story originally appeared on Fox News and has been republished here with permission.

How Egypt’s giant pyramids were built

archaeologists: person who studies human history through digging up sites

mummies: human being or animal that has been wrapped in bandages and preserved

Dynasty: a family line of prominent people or rulers

2. Whose pyramid were the eight coffins found in?

3. Which period of time are they believed to be from?

4. Name two of the earliest pyramids in Egypt’s history.

5. What dinner table ingredient is used in mummification?

Unless you were already an expert on Egyptian history, there were probably a lot of interesting new words in this article.

Read through the article and circle 5 words that are new to your vocabulary. Use the article and the glossary to help you understand each of these words, then write a paragraph that contains all 5 words used correctly.

Did this article cause you to wonder more about the mysteries of Egyptian history? Write down a question that this article raised for you and then conduct your own research to see if you can answer your question.

HAVE YOUR SAY: Do you think finding a mummy would be fascinating or scary?