What does Anzac Day mean and how did it begin? Kids News explains WHAT IS ANZAC DAY?

The day marks the anniversary of the first big military action by Australian and New Zealand soldiers in World War I on April 25, 1915.

WHAT DOES THE WORD ANZAC MEAN?

ANZAC is the acronym* formed from the first letters of the words Australian and New Zealand Army Corps*.

It was first written as “A & NZ Army Corps”, when Australian and New Zealand soldiers were grouped together in Egypt waiting to go to Gallipoli, in Turkey, to start fighting. The soldiers who fought at Gallipoli became known as ANZACs.

From 1917, soldiers who had fought at Gallipoli wore an “A” badge on their uniform.

When referring to the Australian and New Zealand Army Corps, it’s written as ANZAC (in capital letters), and mostly as Anzac (in lower case letters) for other things such as Anzac Day or Anzac biscuits. Australian soldier Walter Mactaggart feeding his pet kangaroo or wallaby at Mena Camp in Egypt (see the pyramids in the background) before going to fight at Gallipoli.

WHERE IS GALLIPOLI? WHAT HAPPENED THERE?

Gallipoli is a narrow peninsula* of land in modern-day Turkey.

In 1915, Australian and New Zealand soldiers were part of the effort to seize the Gallipoli peninsula from the Ottoman Empire (Turkey). The aim was to move across the land and eventually capture Constantinople (now Istanbul), the capital of the Ottoman Empire, which was an ally of Germany.

The Australian and New Zealand soldiers first landed on the beaches of Gallipoli at dawn on April 25, 1915, meeting strong resistance from the Ottoman Turkish soldiers. The fighting dragged on for eight months before the allies were evacuated from the peninsula. Soldiers working on the beach at Gallipoli in 1915. Picture: Charles Ryan

Many soldiers of all nationalities involved in the fighting were killed at Gallipoli, including more than 8000 Australians. Many more were injured and all had endured terrible conditions including extreme heat, strong wind, rain and snow, loud noises from weapons and the grief* of having people being hurt or dying around them. People gather during a ceremony at Lone Pine Cemetery on the Gallipoli Peninsula on April 25, 2019. Picture: AFP

WHY DO WE STILL REMEMBER GALLIPOLI?

We remember Gallipoli to remember and honour the soldiers who fought and died or were injured there.

Although the goal of seizing Gallipoli and advancing towards Constantinople wasn’t achieved, the toughness and the bravery of the ANZACs became well known in Australia and New Zealand and around the world and helped give rise to what has become known as the “Anzac legend”.

Many people believe that the Anzac legend – sometimes talked about as meaning being hard working, tough, brave and fair and looking after your mates – is either something that defines us today, or that it is something we should remember, celebrate and aspire to. WHEN WAS THE FIRST ANZAC DAY?

The first Anzac Day commemorations were held on April 25, 1916. There were services and marches by soldiers and nurses across Australia, a sports day in the Australian military camp in Egypt and a march by more than 2000 Australian and New Zealand soldiers through London. A London newspaper headline called the marching soldiers “the knights of Gallipoli”. For the remainder of World War I, Anzac Day was used as an opportunity to recruit more people into the armed forces.

In the 1920s, Anzac Day became a national day to remember the more than 60,000 Australians who died during World War I.

All the traditions of modern Anzac Day commemorations were in place by the 1930s.

Over time the day also commemorated those who served and died during World War II and, later, other military and peacekeeping operations. 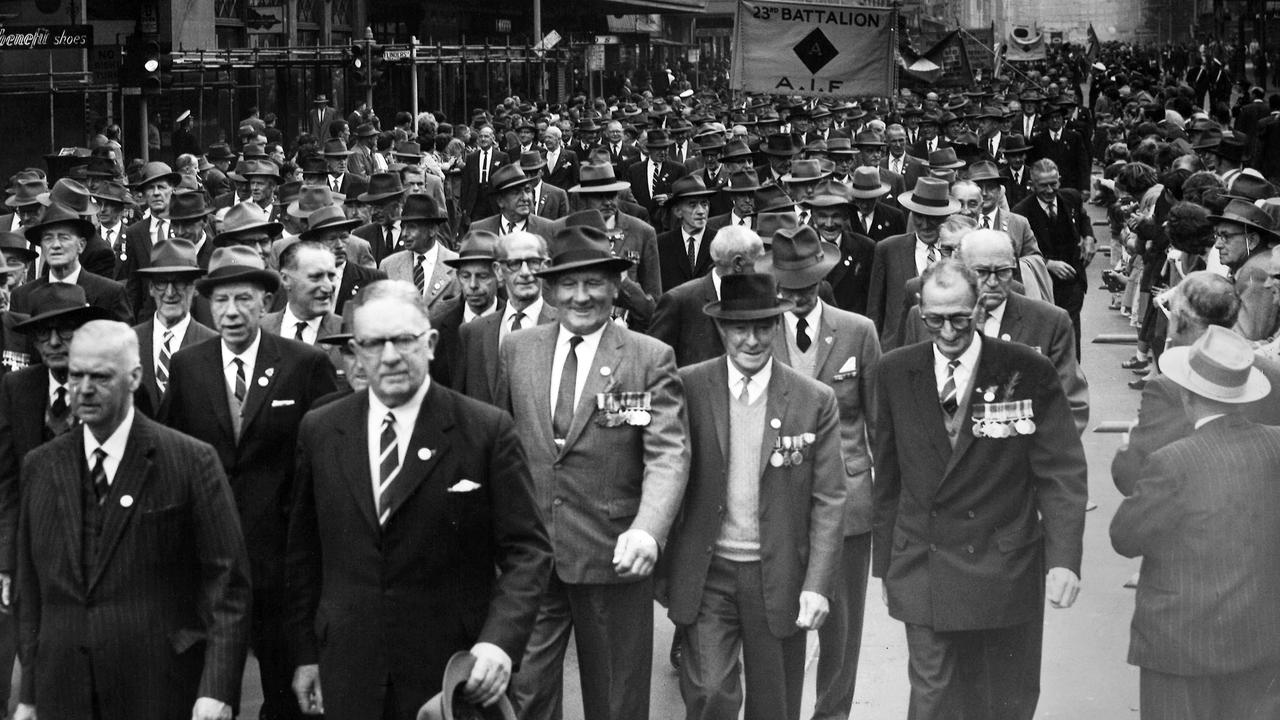 Australians attend commemorative services around Australia, at Gallipoli and elsewhere around the world at dawn, the time of the original landing. These are called Dawn Services.

Later on Anzac Day, former servicemen and servicewomen meet up and march through towns and cities. If a former serviceman or servicewoman is no longer alive, their family members sometimes march for them, wearing their medals of service. Students from Whitsunday Anglican School march in the Anzac Day parade in Mackay, Queensland in 2019.

WHAT HAPPENS AT A DAWN SERVICE?

At the Australian War Memorial in Canberra, ACT, the national Dawn Service begins with the traditional order of service, including the veteran’s* march, commemorative address, laying of wreaths, hymns*, the sounding of the Last Post, one minute’s silence, and the national anthems of New Zealand and Australia.

The bugle call called the Last Post signifies the end of a soldier’s day. It is sounded at Anzac Day services and also at military funerals to indicate that the soldier has gone to his final rest.

Most Dawn Services at other locations follow a similar format. HOW WILL WE OBSERVE ANZAC DAY THIS YEAR?

Anzac Day will look more normal this year, with the lifting of Covid-19 restrictions meaning a return to traditional commemorations for the first time in three years.

Full scale dawn services and marches will be held around the nation on April 25. Robert, 8, observed Anzac Day outside his house in Queensland in 2020 after his family built a flagpole for the commemorations. Picture: Richard Walker

Last year, dawn services and marches were allowed but crowd numbers were restricted so those participating could keep a safe distance apart. Those who attended many of the services also had to register beforehand.

In 2020, public services were cancelled and Australians were encouraged to pay their respects from home.

The RSL* suggested people walk outside their homes and stand in their yard or driveway as the sun came up and the Last Post was played during the Anzac Day Dawn Service. 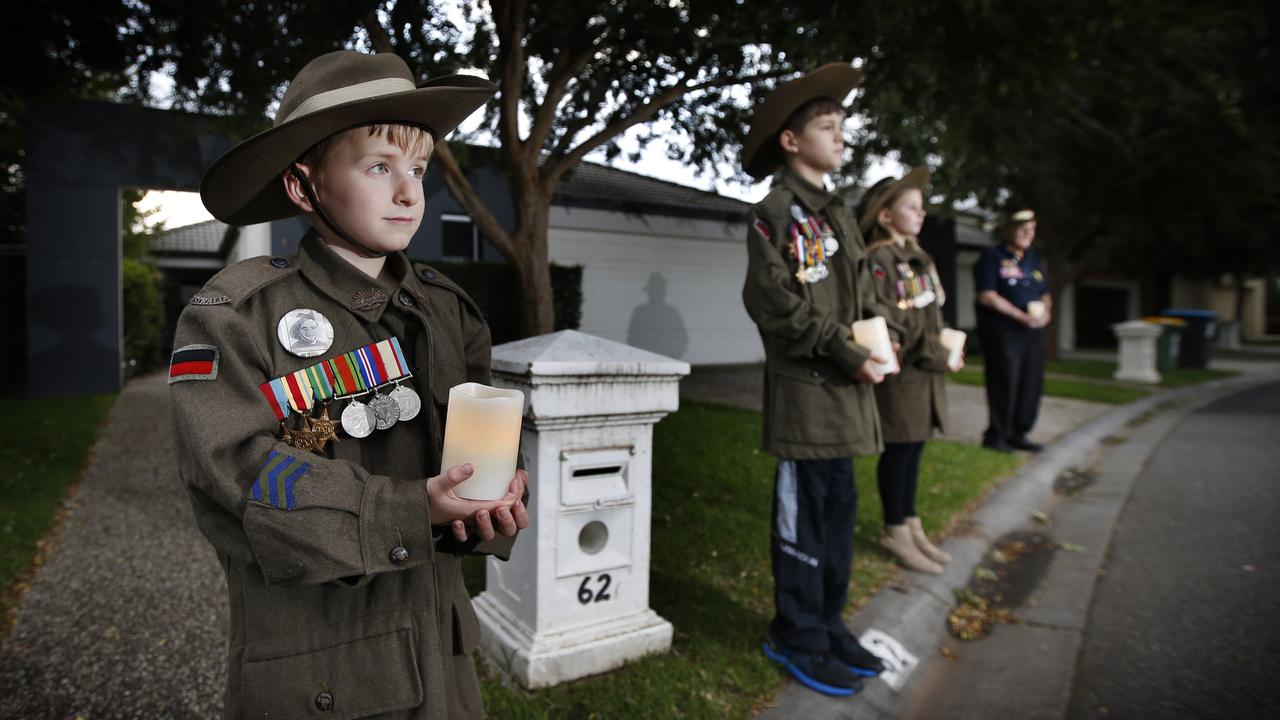 William 7, held a vigil with grandfather David Doughty 66, and cousins Riley, 10, and Kaitlyn, 9, outside their grandfather’s house on Anzac Day in 2020. Picture: David Caird

Diary of a Gallipoli ANZAC

Anzac Day marches get the green light from PM

CLASSROOM ACTIVITIES
1. What have you learnt?
There is a lot of information in this article about Anzac Day. How it began, when it was first celebrated what happens at the services and much more!

Read through the article carefully looking for information that is new to you.

Write 5 pieces of information from this article, that you already knew about Anzac Day.

Write 4 pieces of information from the article, that you did not know before.

Write 2 pieces of information related to Anzac Day that you know, that is not in this article.

Write 1 thing you will do this year to commemorate Anzac Day.

2. Extension
What does Anzac Day mean to you? Do you have a personal connection with someone who was involved in World War I (a Grandparent or Great Grandparent)? Or know someone or of someone who was involved in another war? Is there someone you know who is in the Defence Forces now? Have you heard stories about the mateship and bravery of our soldiers? Or do you have another perspective? Look through some of the activities suggested by the Australian War Memorial that you can do from home this year.

Write a paragraph that explains how you feel about Anzac Day and what it means to you and why it is an important day for Australians and New Zealanders.