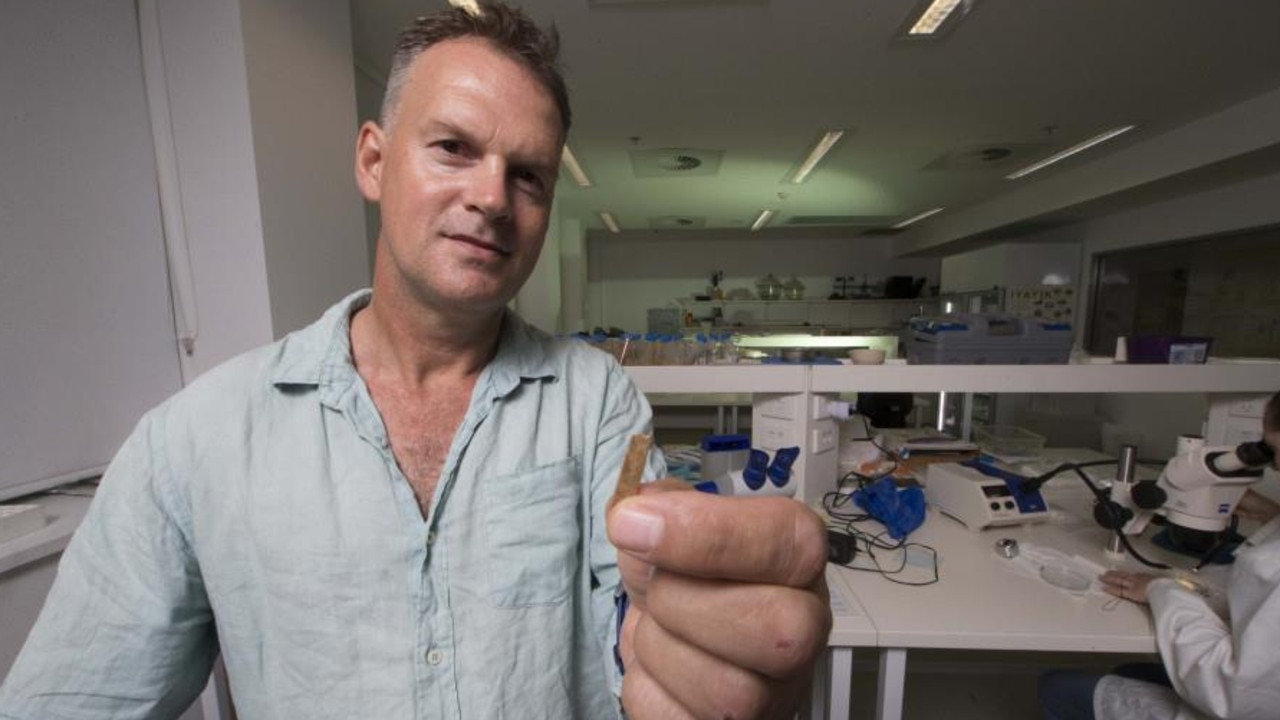 Geoffrey Clark with one of the pieces of bone that is an ancient tattoo tool. Picture: ANU

Researchers have uncovered the world’s oldest known tattoo kit, some of which is made from human bone.

The tools were found on Tongatapu Island, the main island of Tonga in the Pacific Ocean.

Radiocarbon dating* found them to be around 2700 years old, making them the oldest confirmed tattooing combs found in Oceania*.

A pot thought to be for ink was also found in 1963 but is now missing. If it was an ink bottle, it makes this collection of tools the oldest complete tattooing kit to be discovered anywhere in the world.

Historians have long argued whether Polynesian-style tattooing was brought to the region by migrants or whether it developed there in ancient times then spread to other areas.

“This discovery pushes back the date of Polynesian tattooing right back to the beginnings of Polynesian cultures around 2700 years ago,” Assoc Prof Clark said.

Polynesian tattoo tools have changed very little in almost 3000 years, with current-day traditional tattooing equipment used in the Pacific near identical to the ancient examples.

“To find an entire kit is phenomenal. We very rarely find a whole kit of any type of tools in the archaeological record,” Dr Langley said.

“These artefacts show that the modern tattooist toolkit — one-piece narrow combs, haft*, mallet, carbon pigment, mortar, pestle, and ink-holding vessel — were in use 2700 years ago in West Polynesia.

“The kit most likely belonged to one tattoo artist. One tool was broken and it looks like it was being repaired, so perhaps the kit was accidentally left behind or was too broken to bother salvaging*. Perhaps the tattooist was given a new set. Some of the tools in the kit. They have each been photographed on both sides and are very small. Picture: ANU

“The actual tool itself — the comb shape and the way it’s used — hasn’t changed much, and that’s why this find is so interesting. These ancient tools continue to be used today.” One of the tools from the kit, which the researchers believe is made from human bone. Picture: ANU

The ancient tattooist’s kit was excavated on Tongatapu by Dr Jens Poulsen, then of ANU. The entire kit was feared to have been destroyed during the 2003 Canberra bushfires.

While the tattooing combs were found safe and unharmed, the ink pot has not been recovered.

Assoc. Prof. Clark and Dr Langley, who are the first researchers to carefully study and date the kit, said the four tattooing tools are made from bone: two from a large seabird and two from large mammals.

“As there were no other mammals of that size on the island at the time, and human bone is known to be a preferred material for making tattooing combs, we believe they are most likely made from human bone,” Dr Langley said.

“Tattooing is very important in the Pacific. When Christian missionaries* came through and banned tattooing on certain islands, people would travel to other islands to get their tattoos as they represented important aspects of their beliefs and traditions.”

This is an edited version of a story first published by ANU and reproduced with permission. Part of a sketch of a Maori chief by Scottish artist Sydney Parkinson. The chief was most likely from the North Island of New Zealand. Parkinson travelled with Captain James Cook on the Endeavour and was the first European artist to visit Australia, New Zealand and Tahiti. Picture: public domain

ANCIENT AND TRADITIONAL TATTOOS
Humans have marked their bodies with tattoos for thousands of years.

Some of these markings had religious significance, some indicated status in society and some were to guard against or cure illness or injury.

Until the 1990s, everyone believed ancient Egyptians were one of the first cultures to tattoo. Several female Egyptian mummies about 4000 years old have tattoos on their abdomen, breasts and upper thighs. It is thought Egyptians believed these tattoos would help protect a pregnant woman and her baby.

In 1991, the tattooed body of man nicknamed “the Iceman” was found on the border between Italy and Austria in Europe. He has been dated as 5200 years old. The Iceman’s tattoos were on his spine, knee and ankle and historians think they may have been part of treatment for pain or injury.

Tattooing was part of many indigenous cultures including in Japan (Ainu people), Greenland (Inuit people), North America (Cree, Inuit, Osage peoples, among others), South America (people of Chile and Peru) and Polynesia (including Tongan people and Maori people of New Zealand).

CLASSROOM ACTIVITIES
1. The Mystery of the Missing Ink Bottle.
What do you think happened to the ink bottle that went missing in 1963? Imagine that you are an archaeologist who has solved the mystery and found the bottle. Use clues in the story and your imagination to plan a report on what happened to the bottle, how you found it and how you can prove it is the missing bottle.

2. Extension
Why is archaeology important? Write a script for a podcast, radio show or a storyboard for a TV documentary that will help other kids understand why archaeologists are so important. Use information in the story and other things that you know for examples as well as your own ideas. Don’t forget to make your show interesting and entertaining.

HAVE YOUR SAY: What did you find most interesting about this story? What would you like to know more about?
No one-word answers. Use full sentences to explain your thinking. Your answers will not show until approved by editors.