The AFL has praised its players for their public support of Adelaide Crows star Eddie Betts and said player power is one of the strongest tools in fighting racism.

Betts received widespread support after he highlighted a racist comment on a photo of him and Hawthorn’s Shaun Burgoyne arriving to play AFLX* on Friday night. 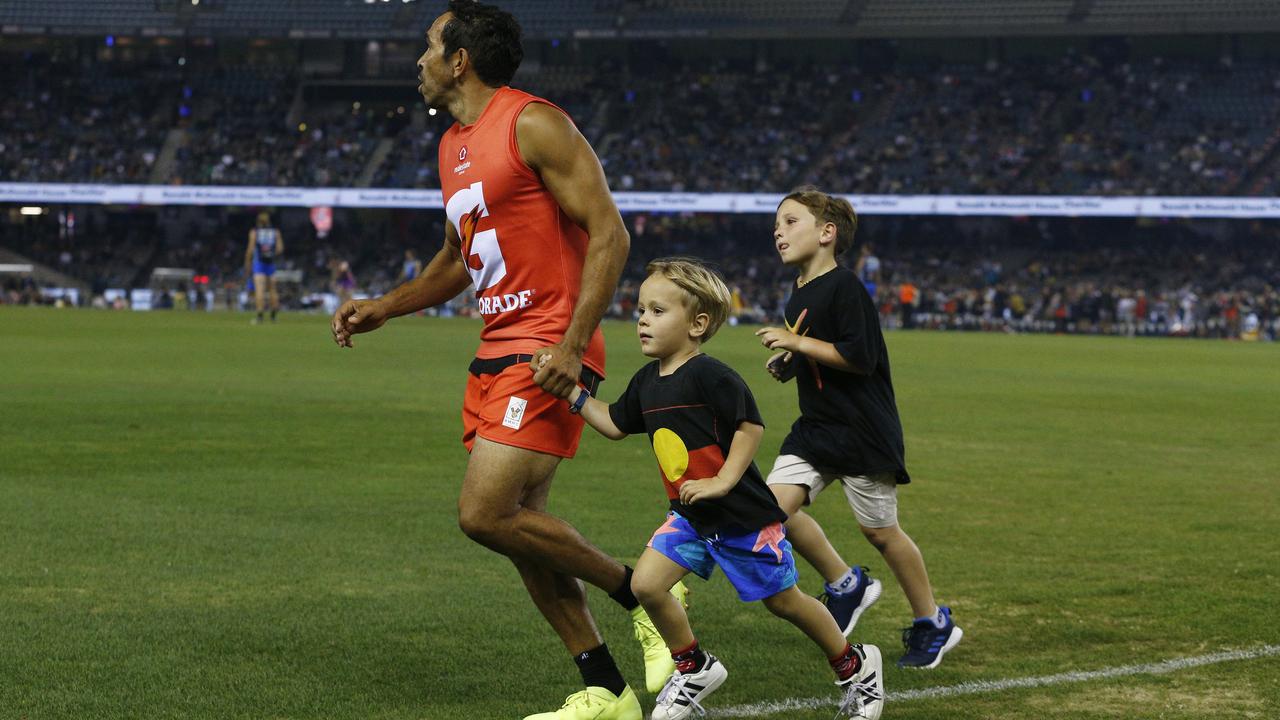 Eddie Betts, captain of all-indigenous Team Deadly with his sons Lewis and Billy during the AFLX competition at Marvel Stadium in Melbourne, Friday, February 22. Picture: AAP

Both Betts and Burgoyne are indigenous players. Racism is behaviour that treats someone differently or badly based on the belief that a person’s own race is better.

Comparing indigenous people to monkeys is a form of racism that has been used by white people all around the world for centuries. It suggests that white people are superior.

The Crows released a statement strongly condemning* the racial abuse but racist comments continued to be posted in the reply section of the Instagram account on Sunday, including pictures of a banana and a monkey.

The club deleted the comments and blocked the accounts responsible. The AFL and the Crows confirmed they were attempting to identify the person responsible for posting the comment on Instagram and may cancel their club or AFL membership if they had one. The Instagram account has been deleted.

Some of the game’s biggest names including Geelong Brownlow Medallist Patrick Dangerfield and Western Bulldogs premiership captain Easton Wood rallied* around Betts over the weekend, labelling the behaviour “disgusting, cowardly and racist”. Shaun Burgoyne of Team Deadly team and his sons catch up with Patrick Dangerfield of Team Bolts during Friday night’s AFLX competition. Patrick Dangerfield was one of many AFL players to quickly express their disgust at racist behaviour. Picture: Getty Images

“It’s wonderful to see this kind of support spontaneously* just show up like this,” Hosch said.

“I’m sure Eddie must appreciate it and when you see it from outside your own teammates and right across the league — that’s a very positive thing … Hopefully that gets the message out there that racism is never OK.”

She said the huge show of support for Betts is a reminder that “it shouldn’t be up to the person being vilified* to speak the loudest”.

Last year, Betts was subjected to another racist comment on Instagram and in 2016 had a banana thrown at him during a match at Adelaide Oval.

VIDEO: Eddie Betts talking after a banana was thrown at him in 2016

Everyone’s welcome at the AFL

CLASSROOM ACTIVITIES
1. Fighting racism
See if you can put yourself in the shoes of Eddie Betts or Shaun Burgoyne, who were the target of racist comments on the online social media platform Instagram.

On a blank piece of paper, draw a large circle. Divide the circle into three equal, wedge-shaped sections. Label the sections: looks like, feels like, sounds like.

2. Extension
Have you ever witnessed or been a victim of racism or heard about an incident of racism like the one you read about today? How did it make you feel? Share with a friend.

What do you think the consequences should be for people who are heard making racist comments at a football match?

VCOP ACTIVITY
Try to imagine how it would have felt to read that comment about the AFL players’ photo.

Pick one of those emotions and write a sentence imagining a time you have felt that way and why.

HAVE YOUR SAY: How does this story make you feel?
No one-word answers. Use full sentences to explain your thinking.