Half a billion women around the world can’t read and write.

That’s just one of the important topics women, men, girls and boys are talking about this week as they gather to mark International Women’s Day on March 8. 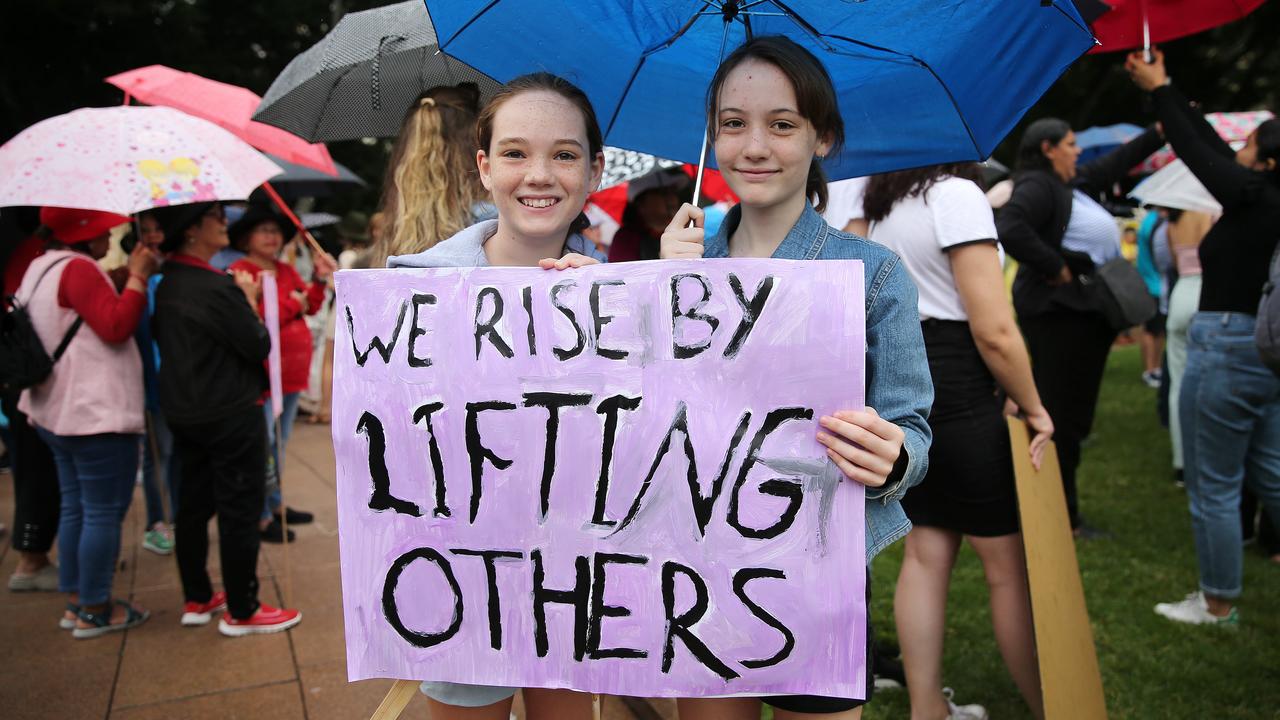 Georgia and Gemma march for International Women’s Day 2019 in Hyde Park, Sydney, NSW, with an inspiring message that remains relevant for this year’s theme of “I am Generation Equality: Realising Women’s Rights”. Picture: Tim Hunter

UN Women Australia executive director Janelle Weissman said the organisation was working towards “a world where all of us are free and equal”.

Ms Weissman said that worldwide there are half a billion illiterate* women.

“UN Women is working to close that gap … to ensure that every woman and girl has access to an education, to employment opportunities, and to lead,” she said, speaking at the UN Women Australia Brisbane breakfast.

“It’s the freedom to go to school. Freedom to pursue any job pathway that she would choose.

“To live life free from discrimination and free from violence, which I know has touched us all.

“And freedom to run … on the footy field, or run for election – that’s what it’s all about.” “There is no country in the world that has achieved gender equality … so this work is unfinished business,” she said.

Project results have shown that educated women are more likely to be healthier, have higher earnings and exercise greater decision-making power within their household.

Shockingly, the children of educated women are also “50 per cent more likely to survive”.

Speaking at the Brisbane International Women’s Day event, Sonali Hedditch, project manager of Second Chance Education, said it was important to quantify* the problem being addressed.

“You’ve heard the statistic already that there’s 500 million women who are illiterate in the world today … that’s huge! And that trend hasn’t changed in 20 years,” she said.

“What has changed is that we are starting to see gender parity* at the primary education level.

Ms Hedditch said that families were taking girls out of school once they hit puberty.

“It’s decided that it’s no longer safe for the girl to commute to school, or it may be that she now needs to be accompanied by a male relative to get to school and there is no one available to do that,” she said. Palestinian schoolgirls walk home from classes at the United Nations-run school at the Rafah refugee camp in the southern Gaza Strip in 2018. Picture: AFP

“It could be that there’s no bathrooms at the school, or bathrooms aren’t segregated*. It could be decided that the financial burden is now too high for the girl to continue her education and it’s a better return to invest in the boy, to continue his education – which is absolutely not true when you look at the data.” A girl carries a water jug where she lives in Kutapalong Rohingya refugee camp on February 8, 2017 in Cox’s Bazar, Bangladesh after her family had to flee danger in their home country of Myanmar. Picture: Getty Images

Early marriage was also a large contributing factor to the disruption of education for young women.

“One in seven girls currently today is married before the age of 16,” Ms Hedditch said.

“So these girls begin their life transitions very early – children are having children. And by the time all of this has occurred, they have essentially missed out on their education.

“These girls become women with kids themselves, and it’s really hard for them to find a second chance, a place to go back to get their education.

“Often it’s not available. Even when it is available there are still so many barriers for these women to access it.” Malala Yousafzai, the Pakistani advocate for girls’ education who was shot in the head by the Taliban, speaks at the United Nations Youth Assembly on July 12, 2013 in New York City, US. Picture: AFP

“It starts in schools and it starts in our workplaces,” she told breakfast guests.

“We all have to be respectful of one another.

“All of that underpins* this year’s theme, Generation Equality. That every girl, every woman has equal opportunities to learn, earn and lead – and live lives free from violence and discrimination.

“I know we have a lot of young students here in the room today and it’s wonderful to see that you’ve made the effort to come today, because generational change does happen.

“And every generation I see more and more change in my lifetime.

“We need to make sure we inspire you to become the leaders of the future and never ever stop.

CLASSROOM ACTIVITIES
1. Importance of Education
“Half a billion women around the world can’t read or write”.

What educational opportunities would you like to see for all girls around the world?

2. Extension
What does Gender Equality mean to you?

Do you think your perspective changes depending on whether you are male or female?

HAVE YOUR SAY: What will you do to mark International Women’s Day? Why is the day important to you?
No one-word answers. Use full sentences to explain your thinking. No comments will be published until approved by editors.