No shortcuts for Sir Tom, a hero of the pandemic Captain Tom Moore poses with his walking frame doing a lap of his garden on April 16, 2020. Picture: AFP

While editorial cartoons are generally designed to give their readers a laugh (usually at some poor politician’s expense), that is not always the case.

There are topics where events require a more serious reflection on an issue, for example our bushfires, acts of terrorism and armed conflicts. These cartoons do not seek laughter as a reaction; their aim is to show empathy for those affected or interpret complex political situations in a simple drawing so that readers can understand what is happening.

There is another area of cartooning that I find myself doing regularly and that is paying tribute to people of note when they die. Whether it be leaders of nations, sportspeople, stars of the stage and screen, science and literature, in my cartoons I like to bid farewell to individuals who have made a difference and affected our lives. In a way pay tribute to their achievements. Death can be a great time of sadness for those left behind but it is also a great occasion to celebrate a life.

In my memoriam* cartoons sometimes I use humour and other times the tone is more solemn. One of my most popular cartoons was when internationally famous Australian wildlife warrior and crocodile hunter Steve Irwin was killed by a stingray. There was great shock and sadness in the community that I wanted to reflect in my cartoon on the subject.

A few days later, one of Australia’s favourite sons, motor racing legend Peter Brock, was killed in a car rally.

Losing two of the most recognisable talents in the one week led me to draw a cartoon that combined both men into one drawing. I pictured Steve Irwin, in his characteristic khaki shorts and shirt walking skyward, with a crocodile of course; in the cartoon a Holden pulls up next to him with Brock behind the wheel and asks him if he needs a lift.

The implication* in the cartoon is that they are going the same way, into eternity. The cartoon struck a chord with readers. 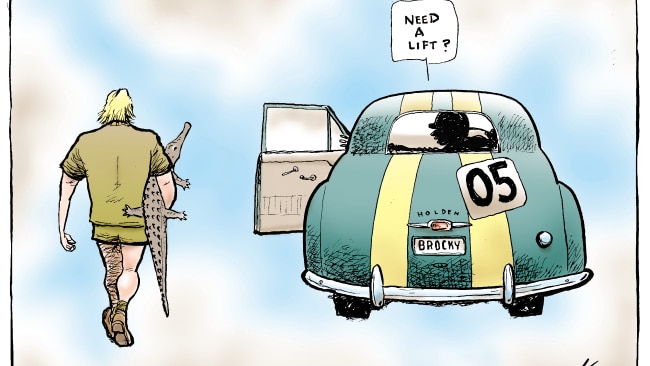 This week we had another farewell. The 100-year-old British World War II veteran Sir Captain Tom Moore passed away. He is the chap who decided he needed to help out the British national health system raise millions of pounds during COVID by walking hundreds of kilometres back and forth across his front yard.

The achievement was incredible because he was 99 years old when he started and walked with the aid of a frame. He became an international hero and was knighted by Queen Elizabeth, whom we should add is no spring chicken and is only a few years younger than the Captain herself!

His efforts not only raised money but also more importantly, raised morale during the tough times the UK was experiencing due to the coronavirus. Sadly he contracted pneumonia and then COVID-19 and he died. There was an outpouring of emotion around the world for a life well lived.

I felt it was appropriate to pay tribute to Sir Tom in a cartoon.

I like to use the “Pearly Gates” as a symbol of entry into eternity. Some people believe in the afterlife and others don’t, but the heavenly ornate wrought iron gates are a nice visual metaphor for ‘passing’.

There are the different forms of ‘paradise’ or ‘heaven’ according to which religion you observe, in this case with Captain Moore it was Christianity. I thought I could use the visual aspect of his fundraising achievement in the drawing to add humour and that was how he walked for miles by going back and forth across his yard. So in the cartoon Sir Tom, pushing his walking frame, does not head straight towards Saint Peter waiting for him at the gates, but in his trademark style he makes his way slowly going back and forth as he did when he raised all that money. Even though the visually funny image of this humble centenarian, hunched over his frame as he serpentines* his way towards the light makes us smile, the cartoon is perhaps saying that even in the afterlife, a person with the character of Captain Sir Tom Moore is seeking to help others.

How giving a little makes a big difference

Harry cooks up a good idea with his mates

Step up and step out for a kinder world

CLASSROOM ACTIVITIES
1. Caption it!
Cartoonist Mark Knight has not used a caption on this cartoon, letting the imagery speak for itself.

Using your sentences to help you, write a caption for the cartoon or some thought bubbles or quotes from the person or animal in the cartoon that will make Mark’s meaning clearer for children or people who haven’t been reading the news lately.