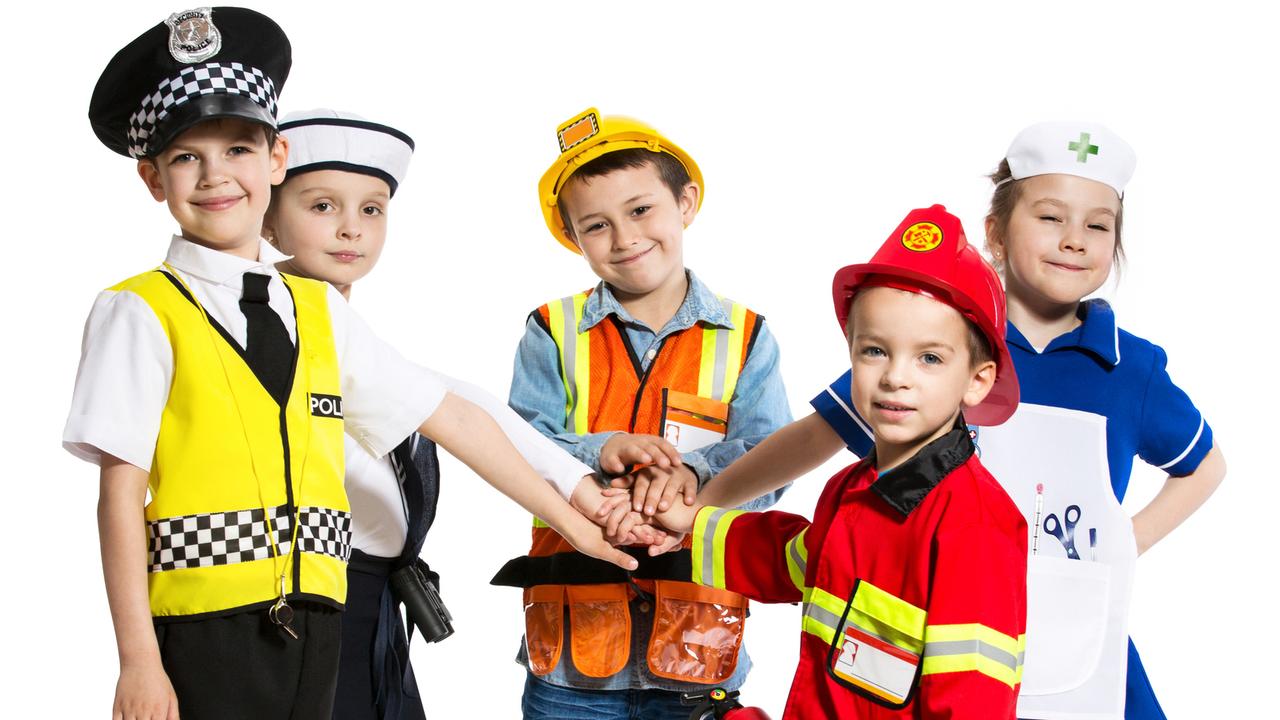 Girls and boys are opting for careers traditionally performed by their genders, with experts saying the way they play is influencing their choices. Picture: iStock

Toy stores should be non-gendered* in a bid to stop girls wanting traditional jobs like teaching and nursing, an Australian researcher says.

They found the top occupations for boys included professional sports, STEM related jobs and policing or defence. Girls wanted to be teachers, vets or to work in the arts. The study found jobs in defence were popular with boys, while warfare toys are common in the “boys section” of toy stores. Picture: iStock

Associate Professor Scholes said the influence of gender stereotypes* on such choices began in early childhood.

“Bright pink ‘toys for girls’ and blue ‘toys for boys’ are sold on store shelves around the world,” she said on The Conversation website.

“In the boys’ section you’ll find science, construction and warfare toys – perhaps a motorised robot or a telescope. “This flows into lower numbers of girls taking STEM (science, technology, engineering and mathematics) subjects at school. In turn, this means fewer women are going on to work in the sciences.”

Associate Professor Scholes’ comments come as women make up only 28 per cent of the STEM workforce, with the biggest gap in the highest-paid jobs of computer science and engineering. A lack of science related toys like this for girls means fewer women are going on to work in science fields, according to Associate Professor Laura Scholes. Picture: iStock

California in the US has passed the first law requiring retailers to display toys in gender-neutral* ways.

In Australia some brands such as Mattel and Hasbro are no longer targeting boys or girls with their toys. Retailers such as Target and Kmart already have gender-neutral toy aisles.

Danish toy giant Lego last week vowed* to remove gender stereotypes from its toys, after a global study found that 71 per cent of boys feared being teased for playing with toys marketed at girls.

Lego said its products were mainly used by boys, but pledged to work to remove gender bias* from its toys and instead market them at both genders.

Lego to build blocks without bias

Gender-neutral friends for Barbie and Ken

CLASSROOM ACTIVITIES
1. Do You Agree?
Are toys the only things that make girls and boys choose more traditional jobs? List all of the things that you think make kids like or dislike particular jobs.

2. Extension
Associate Professor Scholes and Dr McDonald surveyed Year 3 children. This means that they asked them questions to find out what girls and boys want to be when they grow up. They also asked questions to help understand what influences girls’ and boys’ career choices. What do you think they asked? Write five questions that you think they would have asked to help them to write their study.

VCOP ACTIVITY
Marketing Manager Needed
The toy world needs your help. They need to remove stereotypes from toys and who best to ask than the kids themselves. Think of a toy that is marketed to the opposite gender to you. Think about the ad you might have seen on TV or in the toy catalogue. Think about the packaging it’s in.

How could they rebrand this toy to change the marketing (advertising and packaging) to suit both genders?

Create a design for a new advertisement poster or toy package to submit to the toy manufacture.

Think about the words you use, the colours, the pictures and if any children appear in the ad.