Richmond player Sydney Stack leads a traditional dance at the pre-match ceremony of the Dreamtime at the G match in 2019. Picture: AAP Image

Warning: This story contains images of Indigenous Australians who have died

The history, culture and achievements of our First Nations peoples will be in the sporting spotlight this week as the AFL and NRL kick off their Indigenous rounds.

Specially designed Indigenous shirts and pre-match ceremonies will be part of the celebrations, which aim to highlight the contributions made by Aboriginal and Torres Strait Islander players and their communities.

The Indigenous designs worn by the teams from both football codes are a highlight of the Indigenous rounds each year.

Each club has its own design, created by Indigenous artists. Take a look at some of this year’s designs.

The NRL Indigenous Round, round 12 of the season, kicks off with a match between the Brisbane Broncos and Melbourne Storm on Thursday, May 27.

The following night, the Western Bulldogs take on Melbourne in the first match of the AFL Indigenous round, which is known as the Sir Doug Nicholls Round.

The Sir Doug Nicholls Round will run across two weekends this year, with the “Dreamtime at the G” match between Essendon and Richmond the traditional highlight.

The annual Dreamtime match between the Bombers and Tigers began in 2005 and has become one of the most significant* matches on the AFL calendar.

Its success led to the AFL introducing a dedicated* Indigenous round in 2007 and this became the Sir Doug Nicholls Round from 2016. 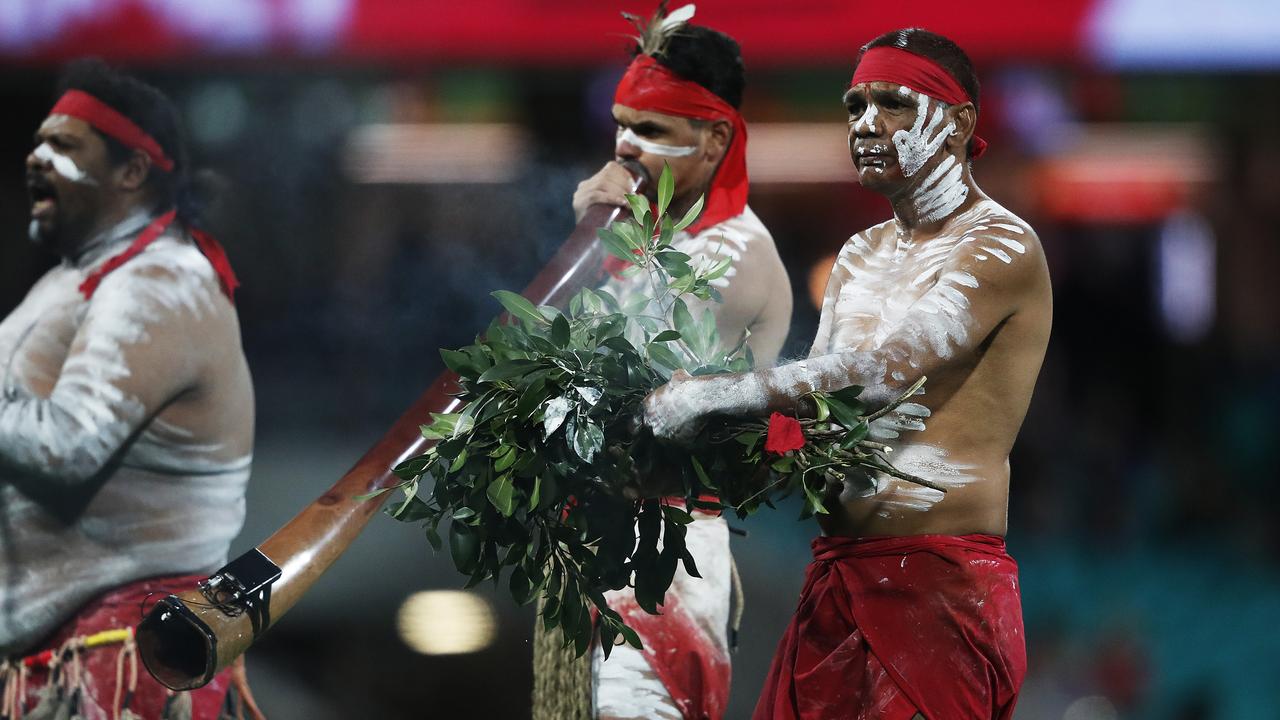 A welcome to country ceremony is held ahead of AFL’s Sir Doug Nicholls Round match between the Sydney Swans and North Melbourne at the SCG in 2016. Picture: Phil Hillyard

The Dreamtime match usually follows another recent tradition, The Long Walk. This event is named after Essendon champion Michael Long, who in 2004 walked from Melbourne to Canberra to talk to the Prime Minister of the time, John Howard, about the challenges faced by Aboriginal and Torres Strait Islander people.

The Long Walk sees thousands of people walk 1km from Federation Square in Melbourne to the MCG, arriving just before the Dreamtime match in a show of support for reconciliation*. Michael Long leads The Long Walk to the MCG for the Dreamtime at the G match in 2017. Picture: Andrew Henshaw

Last year, the Dreamtime match was played in the Northern Territory because of COVID-19 outbreaks in Melbourne.

This year, the match was scheduled to return to the MCG but had to be switched to Perth at the last minute because of another Covid-19 outbreak in Melbourne.

Two other games — Gold Coast versus Hawthorn and Melbourne versus Brisbane Lions — were supposed to be played in Darwin and Alice Springs but also had to be changed when the Northern Territory closed its border to people from Victoria.

The NRL is taking its Indigenous Round around the country this year, with matches in Sydney, Townsville, Brisbane, Perth, Newcastle and Coffs Harbour. A traditional smoking ceremony is done before the Dreamtime match at the MCG in 2018. Picture: Michael Klein

The AFL and NRL have many star Indigenous players in their line-ups today, including the AFL’s Lance “Buddy” Franklin from the Sydney Swans and the NRL’s Cody Walker from the South Sydney Rabbitohs. Cody Walker is one of the NRL’s Indigenous superstars. Picture: Getty Images

Hawthorn’s Shaun Burgoyne is the games record holder for Indigenous players in the AFL, with 395 games. He’s also on track to become the first Aboriginal player to play 400 games. WHO WAS DOUG NICHOLLS?

Sir Doug Nicholls was a Yorta Yorta* man who was not only a standout Australian rules footballer, but also a tireless worker for Indigenous people.

Sir Doug played for Northcote in the VFA and went on to play 54 games for Fitzroy in the VFL. A brilliant all-round athlete, he also became the first Aboriginal player to be selected for an interstate Victorian team in 1935.

After his football career, Sir Doug worked to promote Aboriginal rights and welfare, and became a church pastor.

The father of five received many honours for his work, including in 1972 becoming the first Indigenous person to be knighted*.

The day the flag was missing from the big game

2. Extension
Who is your favourite Indigenous footballer? Write up a fact file on this player, where they came from, and what they contribute to the game.